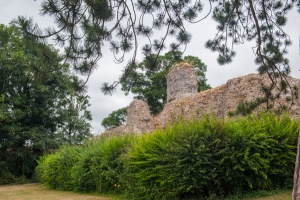 Geoffrey de Mandeville, Earl of Essex, was a 12th-century rascal, an unscrupulous character who was not averse to playing two sides off against each other if it could further his own ambitions. The two sides in question were supporters of King Stephen and Queen Maud during The Anarchy, the destructive Civil War that followed the death of Henry I in 1135.

De Mandeville built a number of castles to strengthen his hold over East Anglia, but in 1142 he was forced to surrender his Anglian strongholds to King Stephen. Never one to take his punishment quietly, de Mandeville rebelled against the Henry II in 1143 and was killed in battle.

When Henry II came to the throne after Stephen's death, he ordered the castles destroyed, fearing that another obstreperous baron might try to use them against the crown. Somehow Walden escaped the destruction meted out to Geoffrey's other castles in the region.

There is some evidence, however, that the castle was partly dismantled around 1157, but in 1167 William de Mandeville, Geoffrey's heir, was granted permission to refortify his stronghold at Pleshy, and it seems likely that he refortified Walden at the same time. 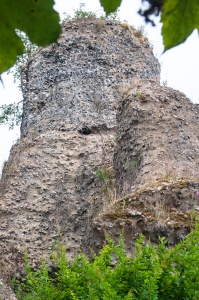 Remains of the
12th c keep

The castle was briefly strengthened again around 1347, when a crenellated hall of masonry was built by Humphrey de Bohun, with several smaller outbuildings. The castle is built on a motte and bailey plan, with a stone keep atop a low mound, or motte.

The outer bailey was quite large, and enclosed the nearby parish church and the early medieval town of Walden (it was not renamed Saffron Walden until later in the medieval period). By 1594 the castle was described as ruinous.

The keep is square and is larger in plan than the impressive stone keep at Castle Hedingham. Only the lower part of the flint and mortar keep remains, and that is in a ruinous condition, due in part to local people robbing the buildings for stone. The theft of centuries has left the rubble core of the 12th-century walls exposed, which does give a good idea of how the medieval masons went about their work.

Though it is not immediately obvious at ground level, the layout of the streets surrounding the castle site follow the line of the 12th-century bailey, or outer enclosure. One relatively modern addition to the 12th-century construction is an 18th-century semaphore station tacked on to the north-west angle. 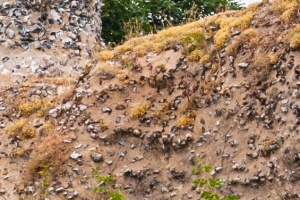 When we visited the castle there was fencing around the entire site so that work could be carried out by the local authority to stabilise the walls and make it safe. As a result, we could only view the ruins from a distance. And they are definitely what I'd call ruins, though the sheer scale of the site suggests a very sizeable fortress.

Immediately beside the castle site is the Saffron Walden Museum, one of the earliest museums in England, founded in 1835.

More self catering near Walden Castle