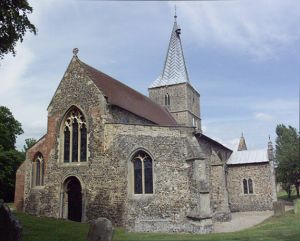 Ickleton, St Mary's Church
St Mary Magdalene at Ickleton is one of the finest Romanesque churches in Cambridgeshire. It dates to about 1100, perhaps on the site of a Saxon minster, and for many years was attached to nearby Ickleton Priory.

The building is loosely cruciform, following the original 12th-century layout. It is built of fieldstones and rubble dressed with Barnack limestone. A pair of piers in each arcade were traditionally thought to be re-used Roman columns from a villa in the village. An alternative suggestion is that they are Saxon - still pretty old!

When a fire damaged the church in 1979 it was decided to clean the walls. When the restorers cleaned away the grime and fire-blackened soot, they found an unexpected medieval treasure, a set of 12th-century wall paintings that had lain hidden for centuries. It is rare to find paintings of this age in England, and these are particularly excellent quality.

Chief among these paintings is a Passion Cycle above the north arcade arches. Below the Passion are scenes of the martyrdoms of St Peter, St Andrew, and St Laurence. Among the other paintings is a Doom, showing the Virgin Mary interceding for souls. Taken as a whole, the wall paintings at Ickleton are extraordinary and certainly deserve national recognition.

Elsewhere in the church is a late 14th-century rood screen with delicate carving and painted panels (much of the painting is Victorian). There are also some very nice medieval pews with carved bench ends. One, in particular, has an extremely fine and large carving of St Michael weighing souls.