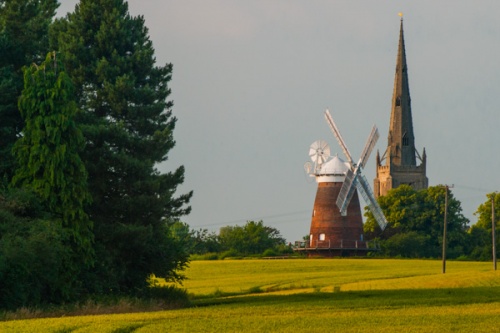 If ever a town deserved the description 'picturesque', it is the Thaxted, one of the prettiest towns, not only in Essex, but in all of England. The combination of historic buildings and a lovely countryside setting makes Thaxted one of the highlights of exploring East Anglia. Thaxted has been described as the 'jewel in the crown' of Essex, and having enjoyed visiting it, I'd be hard-pressed to argue.

Thaxted is built around four historic buildings; a medieval timber-framed guildhall, a restored 18th-century windmill, a pair of chocolate box almshouses, and a magnificent medieval church. On top of that, there are historic buildings highlighting every time period from medieval to modern.

The settlement of Thaxted dates back to at least the Saxon era and it was already a thriving community long before the Normans arrived in England, and there was a church here as early as 981AD. In 1205 a market charter was granted, though it seems likely there was already a market long before this. From the 13th century, Thaxted became a centre for the cutlery industry, in part because of cheap rents charged by local landowners! 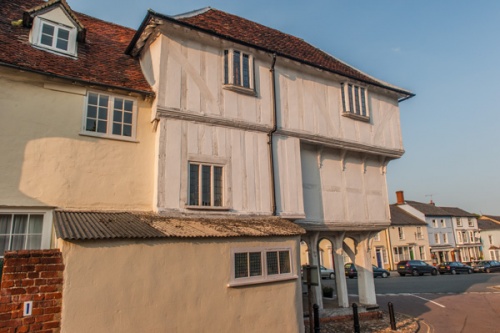 The cutlery trade was at the centre of Thaxted's prosperity until well into the 16th century, and it was money from the trade that helped rebuild the parish church in the 14th and 15th centuries. When the cutlery market declined there was a brief flourishing of weaving in Thaxted and a short-lived Guild of Clothiers was founded in 1583.

It seems that the medieval market place extended up Town Street and took in much of what is now the churchyard, but by the late 14th century the layout of the town achieved its present look, and it has changed very little since then.

The current church building was begun in 1340, though it was not complete until 1510! It is unquestionably one of the finest town churches in the east of England. Above the porch are carvings of two wild men carrying clubs, similar to the 'woodwose' figures found in Suffolk. Edward IV gave the north porch, and Lionel, Duke of Clarence, gave the south porch.

John Ball, the instigator of the 1381 Peasant's Rebellion, once stayed in the chamber over the south porch. The church is notable for its stained glass, which ranges from 14th-century glass depicting of Edmund, Earl of March, to late Victorian glass by C.E. Kempe, the famous Victoria glazier (look for Kempe's wheatsheaf symbol in the chancel and Becket chapel). The font is dwarfed by a glorious 15th-century cover. 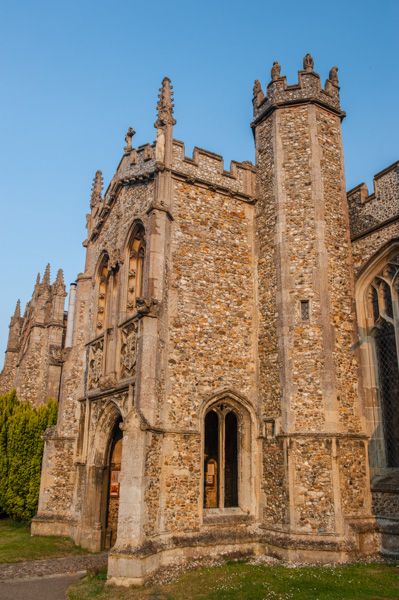 Thaxted's most famous (or infamous) vicar was 'Red' Conrad Noel, who served from 1910-1942. Noel was controversial for his leftist views, and controversy seemed to follow his every action. He once famously hung a socialist red flag beside a Sinn Fein banner and the Cross of St George inside the church, thus launching a 'Battle of the Flags', which eventually resulted in the church authorities ordering the flags removed. Noel also purchased The Chantry almshouse for the church, and helped found the Thaxted Morris Men. 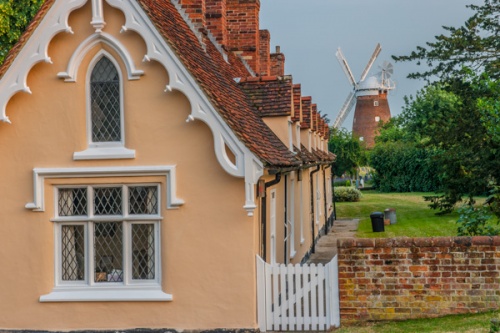 To the right of the path leading from the windmill to the church is a thatched Chantry cottage, built to house the local priest in the 14th century. It later was split into 4 separate dwellings and served as an almshouse. Opposite the Chantry and forming a picturesque pair of buildings is a second almshouse, built about 1714 on the site of an earlier medieval chantry. Though roughly the same size as the Chantry, this almshouse accommodated up to 16 elderly people. 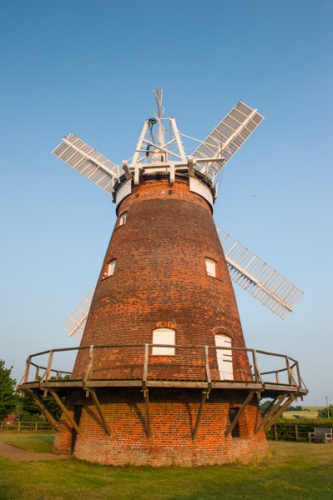 In 1804 a local farmer and businessman named John Webb built a windmill from red brick, looking across a slope of land at the edge of town. Webb owned the Swan pub, as well as the local brick and tile works. The mill operated until 1907 and later served as a youth centre. Beginning in 1970 it was slowly restored to working order.

The mill has a wooden gallery around the base, and benches to sit and admire the view. There is a small rural museum inside, with one of the prize exhibits being the manually operated town fire pump. There are wonderful views from the mill to the ruins of Tilty Abbey far n the distance.

This delicious timber-framed building was probably more accurately a Moot Hall, or civic meeting place, and not a guild hall. However, it has been known as the Guildhall for centuries. Built around 1450, it was for a long time thought that it housed a Cutlers Guild, as cutlers were the most prosperous merchants in Thaxted. However, there no evidence that such a guild existed, though it seems likely that wealthy cutlery merchants contributed to its building. 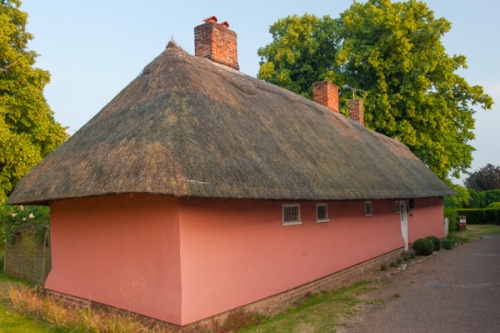 Like many medieval halls, the ground floor is open, but under cover, so that a regular butter market could be held here with some shelter from the elements. There was space for an indoor market on the first floor, with shuttered windows. During the 18th century the Guildhall was home to a local grammar school, as well as housing local administration offices.

Set into the right side of the building as you look uphill is a small lockup, still with its original door and barred window grate. The Guildhall now hosts a small museum of bygones. To one side of the hall is Stoney Lane, a cobbled street rising steeply towards the churchyard. Fronting the street are three medieval cottages, forming a delightfully picturesque sight.

One of these is Dick Turpin's Cottage, a reminder of an old tale that the famous highwayman lived for a time in Thaxted. Even if he did - and that is by no means certain - there is no evidence that he resided here. But never let hard facts get in the way of a good story! 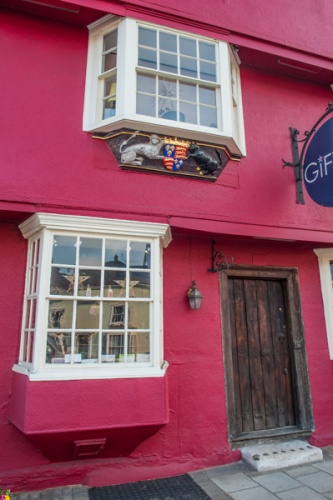 On Town Street is Recorder's House, a three-storey 15th-century building with a pair of jettied windows on the second storey.The house was originally a hunting lodge for Edward IV, and the timber supporting the windows is carved with Edward's coat of arms. Next door to the Recorders House is The Steps, where composer Gustav Holst lived.

The area between the Steps and the Guildhall is lined with lovely old Georgian houses, one of which - Market Cross - stands on the site of the medieval stone cross. The cross is gone, a victim of iconoclasts during the Reformation.

On the opposite side of the road, at the lower end of Town Street, is the town pump, a reminder that most Thaxted houses did not have running water from the tap until the 1930s. Householders would have had to make regular journeys to the pump to fetch water.

On Bolford Street is the United Reformed Church, built in 1876 on the site of an 18th-century church. This may also have been the site of one of Thaxted's three medieval guild houses.

Look at the elegant Georgian houses on Newbiggin Street. They may look 18th century on the outside, but that facade hides medieval structures within; the oldest house here dates to 1450. Set on the wall of 32 Newbiggin is a plaque that commemorates the founding of the Thaxted Morris Ring in 1932. Opposite the church is Clarance House, an excellent example of an early 18th century Queen Anne house.

As Sir John Betjeman once remarked, "There is no town in north Essex – and very few in England – to equal in beauty, compactness and juxtaposition of medieval and Georgian architecture, the town of Thaxted". Well said Sir John, and I heartily agree. 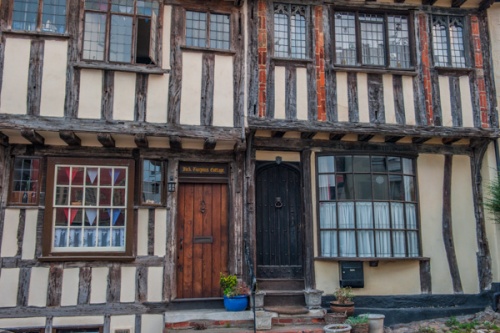 I'll finish this article with a personal anecdote. My wife and I visited Thaxted on a lovely summer's day. It was our last stop of a tiring journey, driving down country lanes and stopping off to see historic houses, churches, and monasteries around Essex. I was tired but exhilarated as we came around a bend in a country road and saw before us, outlined against the deep blue sky of late afternoon, the outline of Thaxted windmill. Oh, my!

We pulled the car over and I ran back to the spot we'd seen the windmill, and I managed to get a couple of photos of the mill lit by the sun. It was pure magic. But better was to come. We parked in the free town parking lot and read a really useful information panel there that showed where all the historic buildings in town were located.

For the next hour we explored the town, diving into the wonderful church, visiting the windmill, and marvelling at the almshouses and the guild hall. Then at last, our day done, and my camera full of photos, we crossed to a picturesque inn directly across from the church to enjoy a quiet pint and a pub meal.

Sitting at an outside table, the setting sun warming my face, I looked across at the church. Its tower was positively glowing with the golden sunlight. And to think that John Ball might have seen a similar sight those many years ago really brought home the history of what I was seeing.

To one side of the church sat the almshouses, and beyond that I could see the sails of the windmill. It was one of the most magical sights I have seen in all my [many] years of exploring historic Britain. Tradition, history, and yes, a fair dose of 'ye olde worlde' charm. It was a moment that I will never forget. If you get a chance to explore Thaxted, take it! 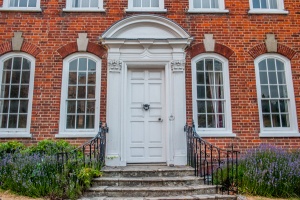 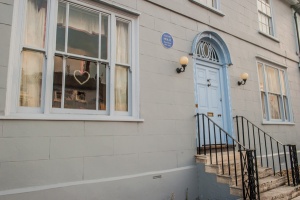 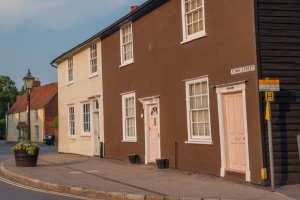 The bottom of Town Street 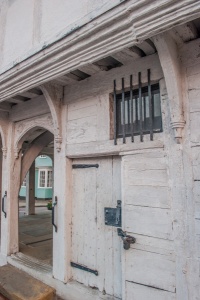 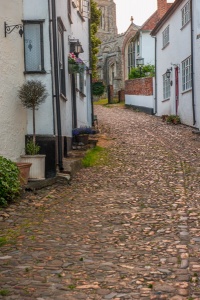 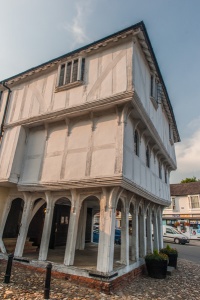 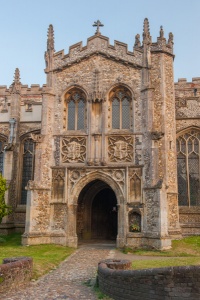 More self catering near Thaxted

More bed and breakfasts near Thaxted