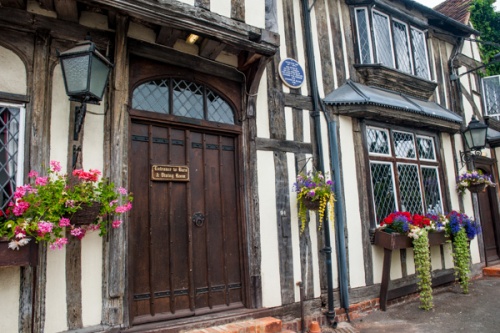 Coggeshall is a wonderfully picturesque town on the River Blackwater, midway between Braintree and Colchester. It is perhaps most famous for a pair of medieval buildings, both owned by the National Trust.

The first is Grange Barn, on the southern edge of town. The barn was associated with medieval Coggeshall Abbey, and you can still see many of the abbey buildings, now converted to a private dwelling.

The other major attraction is Paycockes, a medieval timber-framed merchant's house on West Street, featuring wonderfully carved ceiling beams. But there is so much more to see than just those pair of historic buildings.

Coggeshall was granted a market charter by Henry III in 1256. The market was held at the bottom of Market Hill (at the junction of East Street and Church Street). In the centre of the market place stood a small chapel and a market house. 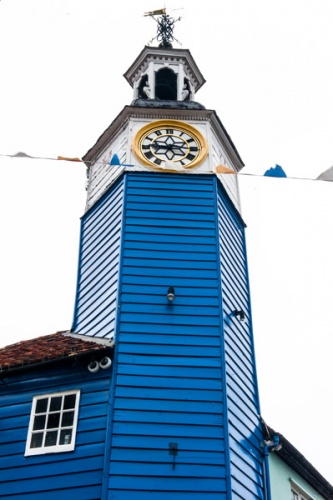 A later addition to the market place was the Chapel Inn, which served as the official residence of the High Sheriff of Essex. When the Peasant's Revolt erupted in 1381 poor workers on their way to join Wat Tyler's rebellion sacked the residence. This attractive timber-framed building became an inn in 1856.

One of the most iconic sights in Coggeshall is the blue and white painted Clock Tower, just a few steps up from the market place This weatherboarded building was built in the 14th century. By the 17th century, it was called Crane's House after Samuel Crane left rent from the property to the poor of the parish in 1669.

In 1787 Sir Robert Hitcham left money to set up a school for poor people, and rooms were rented inside Clock House for this purpose until 1859. When the medieval Market House in the market place was pulled down around 1795 the clock and bell were installed in Crane House. Then in 1887, the tower was raised and a new clock added to commemorate Queen Victoria's Golden Jubilee. 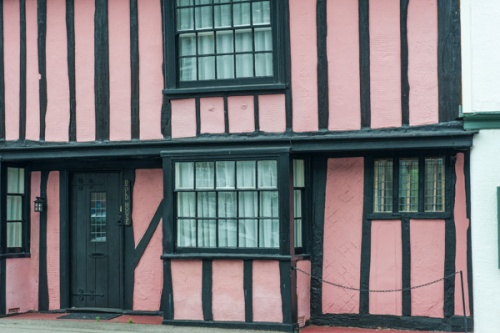 Further up Stoneham Street from the Clock Tower is the village hall, once a brewery, with a small annexe housing the Coggeshall Museum. The museum has collections of genealogical resources, historic artefacts, old photographs, and other historic objects donated by local people. Displays include the heritage of lace-making, the wool trade, and wood carving in Coggeshall.

There are exhibits on famous local families, including the Doubledays, prominent Quakers. A few steps from the museum is a legacy of the Doubledays; a peaceful garden, and beside it, a Millennium garden.

The Doubledays would have worshipped at the Friends Meeting House, built in 1878, which now serves as the town library. Another historic place of worship on Stoneham Street is Christs Church, formerly the Congregational Church, built in 1715.

At the bottom of Stoneham Street is the site of Black Horse, once an inn frequented by the Coggeshall Gang, a band of violent criminals whose grip over the town in the 1840s has been described as a 'reign of terror'. The gang was broken when a captured member informed on his fellows, and they were transported to Australia. 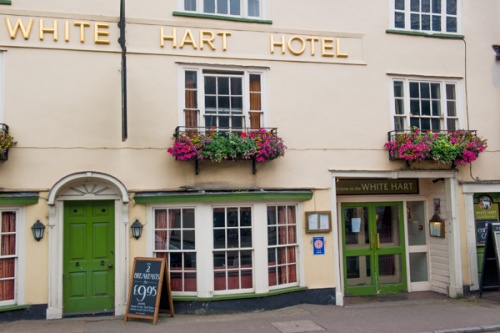 The White Horse became an inn in 1675 and served as a coaching stop for London routes. The building is a jumble of historic properties merged together, including a house built in 1526 by Robert Paycocke, a member of one of Coggeshall's most famous wool trading families.

We've already mentioned the National Trust's Paycockes house on West Street, but immediately beside Paycockes is The Fleece Inn, another attractive 16th century building, once home to the wealthy Richold family, related by marriage to the Paycockes next door. Opposite the Fleece is the Sir Robert Hitcham School, established in 1636 to educate the poor of Coggeshall. 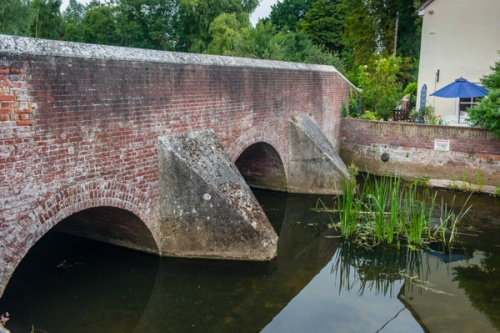 South from Market Hill is Bridge street, where a peculiar iron bridge crosses a small stream that marks the original course of the River Blackwater. The bridge marks the traditional boundary between Little and Great Coggeshall (look for the initials LC at the base of the bridge).

The main bridge across the Blackwater has 12th-century bricks embedded in its arches; this is one of the earliest uses of bricks in post-Roman Britain.

By the bridge is Rood House, its name a reminder that a great cross once stood here to mark the boundary of lands owned by Coggeshall Abbey on the south bank. The bridge was built by monks of Coggeshall Abbey when they diverted the river to drive their mill. On the south bank stands Monkwell, one of the 19th century silk mills that once abounded locally.

A short walk up Grange Hill brings you to Grange Barn, mentioned above. The barn dates to the 12th century and is one of the finest examples of medieval timber construction in Europe. Faced with demolition in the 20th century it was rescued by a local charity and is now maintained by the National Trust. In addition to the superb king-post roof and tile roof there is an exhibition of woodworking and farm equipment within the barn. 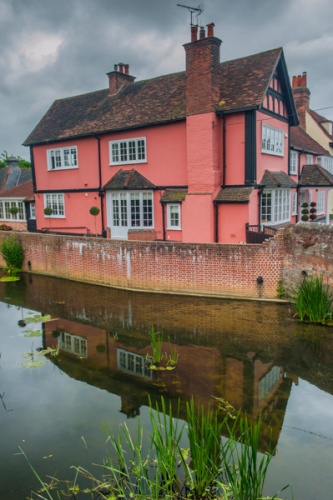 Opposite Grange Barn is Abbey Lane, which leads to the old Coggeshall Abbey site, founded around 1140. On the way, you pass St Nicholas Chapel, a 12th-century church that stood at the gatehouse to the abbey. The lane continues to Abbey Farm, a private dwelling made up of former monastic buildings.

The abbey is open for heritage days and regular pre-arranged tours, and includes some of the earliest medieval vaulted chambers in Britain. The route is part of the Essex Way, so you can walk right through the farmyard and examine the medieval buildings in detail. A short way from the main house is Abbey Mill, once a corn mill, later converted for use as a silk mill, and still in working order.

We haven't yet mentioned one of Coggeshall's most impressive historic buildings; the parish church of St Peter ad Vincula. This is mainly a 15th-century building, a testament to the wealth and influence of East Anglian wool merchants in the medieval period. There are excellent 15th and 16th-century brasses, including many to the Paycocke family. The church is large and spacious, with huge Perpendicular windows. 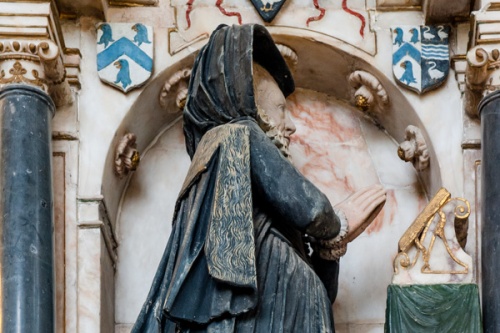 Strolling down Church Street towards Market Hill you come to still more impressive timber framed buildings, including The Woolsack Inn, a lovely timber-framed building dated to the 14th century. Before becoming an inn the Woolpack was home to Rev. T. Lowry, who was ejected as vicar of St Peters in 1665 for his radical beliefs. His former house was licensed for worship in 1672 and became an inn in 1708.

Further along Church Street is Woodlands, a 16th century house, and Coggeshall House, first recorded in 1492 and now home to Lord Newton. The Manse is 16th century, with a lovely carved frieze of 1565 on the exterior wall. The Hutleys is 15th century, and Cockerells is another excellent 16th century timber-framed buildings. Near Market Hill is a row of three timber-framed buildings, one of which is Saunders, all that is left of the 16th century merchant's house called Great House. It was here in the Victorian period that local women made tambour lace, which was so popular it became known as Coggeshall Lace. Opposite Saunders is Spooners, with a plaque dated 1467, though parts of the building are a century earlier.

These are just some of the historic highlights of one of the most beautiful and historic towns in Essex. Most of these sites are outlined in an excellent leaflet published by the Coggeshall Museum and titled 'A Walk Around Coggeshall'. This is available at many tourist outlets locally and is well worth picking up. Our family followed the trail and had an extremely enjoyable time exploring all the historic highlights of the town - and there are a lot of highlights to explore! 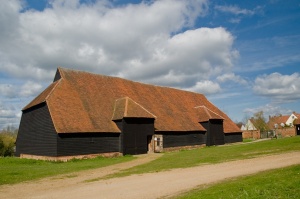 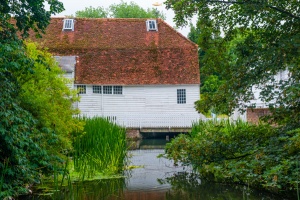 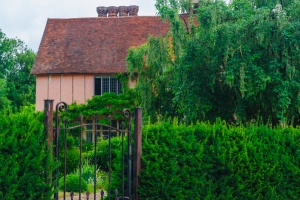 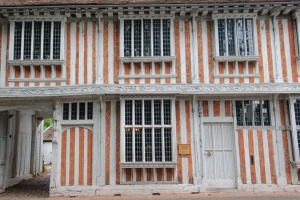 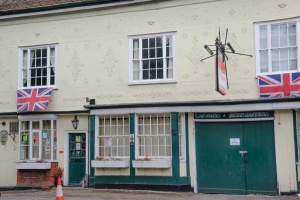 More self catering near Coggeshall

More bed and breakfasts near Coggeshall