HERITAGE HIGHLIGHTS:   One of the best preserved Saxon churches in Britain 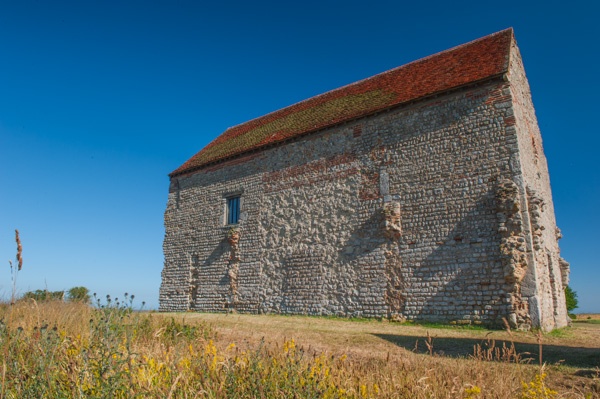 The Saxon chapel of St Peter-on-the-Wall was founded by St Cedd in 654AD (though other estimates suggest a date of 660-662AD). Cedd established his chapel over the ruined gate of the abandoned the 3rd-century Roman fort of Othona, and reused Roman stones and bricks to help build his chapel; it is quite literally 'on the wall' of the Roman fort.

Sometime in the late 3rd century, the Romans built a fort on the south side of the Blackwater estuary, east of the current village of Bradwell-on-Sea, at the most easterly part of the Dengie peninsula. The location was perfect for controlling access to the Blackwater and the Colne rivers; the latter leading to Camulodumum (Colchester), one of the most important cities in Roman Britain.

The Othona fort was similar in style to several forts along the so-called Saxon shore, lining both sides of the English Channel as far south as Hampshire and north to modern-day Norfolk. We tend to think of Roman forts as being rigid rectangles, but Othona was trapezoidal in plan, with rounded corners. The outer wall had a base 4.2 metres thick, suggesting a very tall structure, and it enclosed an area of 2ha. It was built of Kentish ragstone, brought by boat.

Outside the rampart was a single ditch. There is some dispute as to why the forts were built; either to counter the threat of Saxon invasion or to control a Saxon population that had already begun to settle in the area. We do not know the makeup of the Roman garrison; the only contemporary account to mention Othona says simply that it was garrisoned by a 'numerous of the brave ones'. 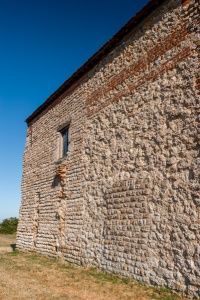 Cedd was a 7th-century missionary monk, trained at Lindisfarne, in Northumberland. Sigbert, king of the East Angles, asked Bishop Finan of Lindisfarne to send monks to his kingdom to re-convert his people to Christianity.

Cedd sailed down the coast in the company of another monk and established a chapel at Bradwell-on-Sea to act as a base for his missionary work. He made some initial conversions and returned to Lindisfarne to report to Finan.

In recognition of Cedd's success, Finan named him Bishop of the East Saxons, in which capacity he returned to Anglia and carried on his missionary work. He roamed far and wide throughout East Anglia, establishing a large number of churches (see Greensted for one example), and monastic communities at Tilbury, Prittlewell, Mersea, and Upminster.

In 664 Cedd was called north to act as interpret at the pivotal Synod of Whitby, which firmly established Roman Catholic worship as the predominant Christian strain in Britain, and effectively diminished the power of Celtic missionaries like Cedd.

While returning from Whitby, Cedd, with 30 colleagues, visited another of his monasteries at Lastingham, Yorkshire. There he caught the plague and died. Twenty-nine of his fellow monks died with him, leaving only one young boy to return to Bradwell-on-Sea. 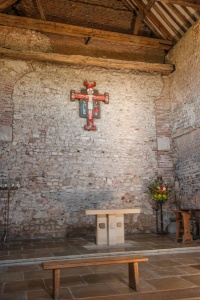 The altar and east wall

After Cedd's death at Lastingham, his diocese was transferred to the Bishopric of London. It was not long before many East Anglians reverted to paganism, and it was left to a succession of later missionaries to restore Christianity in the region.

St Peters became a minster, or mother church for the region. After the Norman Conquest, it was granted to the Benedictine monastery of St Valery in France, but in 1391 it was purchased by William of Wykeham, one of the most powerful churchmen of the medieval period.

After the Reformation St Peters stopped being used for worship and served as a barn during the 18th century. In 1920 it was restored for worship.

Cedd's ties with Lastingham, where he was buried, and Lindisfarne, where he was raised and trained as a priest, are remembered today in the simple and moving altar within the chapel he founded. The altar was crafted in 1985 and has three stones embedded into its front; the left stone is from Lindisfarne, the right from Lastingham, and the centre stone a gift from Iona, the early centre of Celtic Christianity in Britain.

Walking down the old Roman road, with the chapel visible in the distance, was one of the indelible memories of my most recent trip to Essex. This solitary rectangular structure, with its high walls and prominent position overlooking the coast, is quietly compelling. You feel like you're walking back in time as you approach the chapel.

The interior is surprisingly lofty and spacious, especially by comparison to other early Saxon churches, for example, St Lawrence church in Bradford-on-Avon, Wiltshire, which feels dark and mysterious by comparison.

The interior is almost completely devoid of decoration. There are a few modern benches lined up facing the modern stone altar, and a large crucifix attached high on the east wall. The crucifix was designed by artist Francis Stephens and dedicated in 1949, on the occasion of the very first pilgrimage to Bradwell after the end of WWII. 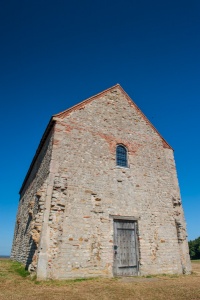 The west wall and entrance

There are iron brackets for candles on the walls, but apart from that, the only light is admitted through one small round-headed window on the west wall and a pair of rectangular windows, one on either side of the altar. The windows admit long shafts of light which fall upon the interior floor like a spotlight.

What is fascinating about the interior is tracing the lines of ancient arches in the stonework, for example high on the north side of the east wall, where you can see a truncated brick archway.

There is a signposted trail which encircles the chapel, following roughly the outline of the Roman fort and allowing wonderful views out to sea.

St Peter-on-the-Wall is one of the most moving and fascinating historic church I've ever had the pleasure of visiting. Its very simplicity speaks volumes about the era in which it was built. As we left, walking down the straight Roman road back to our car, I couldn't resist looking back over my shoulder again and again at the lonely chapel. 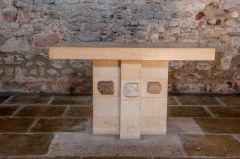 About Bradwell-on-Sea
Address: Bradwell-on-Sea, Essex, England, CM0 7PN
Attraction Type: Historic Church
Location: At the end of a country lane, signed to the Othona Community, east of Bradwell-on-Sea village. There is a small parking area, from there you must walk up the level track, several hundred yards to the chapel.
Website: Bradwell-on-Sea
Location map
OS: TM030081
Photo Credit: David Ross and Britain Express

More self catering near Bradwell-on-Sea

More bed and breakfasts near Bradwell-on-Sea