HERITAGE HIGHLIGHTS:   One of the finest Tudor houses in England, with massive gatehouse towers 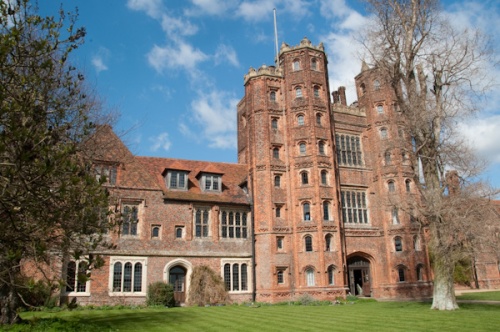 The house that never was

Layer Marney is a beautiful Tudor house begun in 1523 by Henry, 1st Lord Marney on a site overlooking the River Blackwater about midway between Colchester and Maldon. He intended to build a palatial courtyard house, but his elaborate scheme was scarcely begun before the family line died out and construction stopped.

The most impressive feature of the house is a striking red-brick gatehouse tower, probably designed by the Henry VIII's architect Guiliamo de Travizi. The imposing tower stands 80 feet high (roughly 24 metres), and is dressed with terracotta and decorated with diapering patterns. The south side has twin semi-octagonal turrets, 8 storeys high. To the north are 7 storey turrets on a square plan.

Within the complex of buildings is a large barn incorporating pieces of 13th-century stonework. Another major feature is a long gallery, built of brick. The interiors retain numerous original Tudor details, including fireplaces, doorways, plasterwork ceilings, and wooden panelling. One interesting detail is a terracotta fireplace.

You can ascend a spiral stair to the top of the west turret to get fabulous views over the grounds and the surrounding countryside, including St Mary's church. You can also get really good views of the elaborately twisted Tudor chimney stacks from the turret roof. 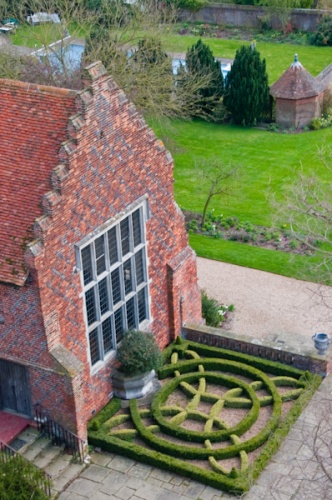 Henry, Lord Marney served Henry VIII as Lord Privy Seal. As such he was one of the most influential men in the country. Just how important is born out by the inscription on his tomb in the nearby church. It reads in part:

Henry, First Lord Marney, Sheriff of Essex, Chancellor of the Duchy of Lancaster, Executore of the Countess of Richmond, Privy Councillor to Henry VIII, Captain of the King;'s Bodyguard, Fought Battle of Spurs 1513 Knight of the Garter, Lord Privy Seal: 1522, Baron Lord Marney: 1523, Died in London May 24, 1523, Buried here at Layer Marney.

Such an important person needed an impressive house to showcase his wealth and influence. Around 1515 Marney began to make plans for a palatial residence, one intended to outshine Cardinal Wolsey's Hampton Court Palace. But little of the residence had been complete when Marney died in 1523. Even so, Henry VIII managed to visit the house, in 1522, when it must have been a shambles of building materials. 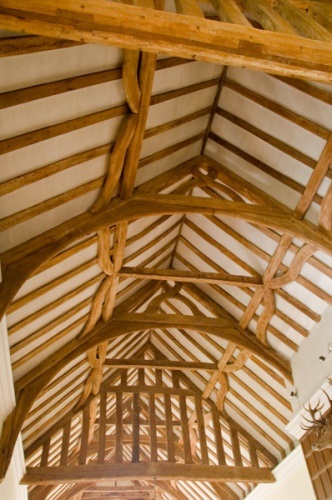 His son John intended to carry out his father's designs, but he, in turn, died just 2 years later. Despite two marriages, John left behind no male heirs, so the Marney line ceased and construction ceased. By the time of the 2nd Lord Marney's death only the church, stable block, and the front range of the grand house had been completed.

But even that one range is impressive enough to make Layer Marney one of the most striking and historically important Tudor houses in the country. After the Marney line died out the house passed to Sir Brian Tuke, Treasurer to the royal household, and the Tukes owned it when Elizabeth I stayed here on a royal progress through Essex in 1579.

Layer Marney is supposedly one of the most haunted buildings in Britain. Among the various spectres said to have been seen here is Henry, the 1st Lord Marney. He stalks the staircase, clad in a full suit of armour. Apparently, he is annoyed that his grand plans for the house were never carried out. Lord Henry has also been seen riding his horse through the grounds, still clad in armour.

Other reports talk of strange noises and doors banging where there are no doors. Visitors have reported a woman in Victorian costume in grounds, looking very agitated. Ghosts of workmen have been seen in the barn, and poltergeist activity has been reported in the east wing.

The house is set in lovely formal gardens and open parkland with views to the Blackwater estuary. There is a knot garden in the style of a Tudor design, old roses, and rare trees. Beside the house is the sizeable church of St Mary the Virgin, where you will find the very impressive tombs of generations of Marneys, including the 1st and 2nd Lord Marneys.

I knew very little about Layer Marney before visiting it for the first time. So to say I was impressed with my initial view of the huge gatehouse towers is an understatement. I was blown away. It is staggering to think what the house would have looked like if Lord Marney had lived long enough to finish his grand building project.

Do take time to visit the nearby church to see the Marney tombs, including that of Sir William Marney (d. 1360). There's just as much historic interest in the church as the house itself! 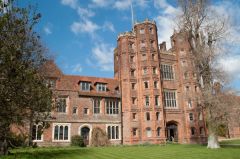 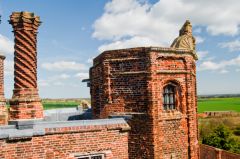 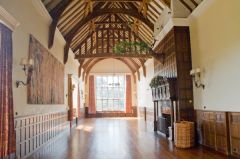