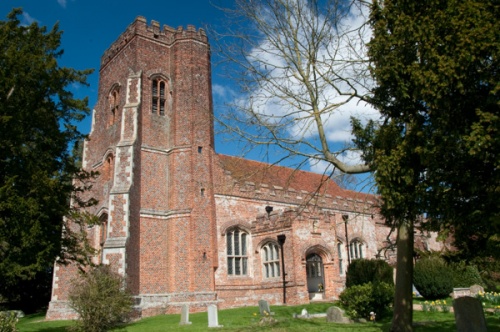 The church of St Mary the Virgin stands immediately beside the Tudor mansion house of Layer Marney Tower. The church as we see it today was built at the same time as the house, around 1523, and using the same red-brick - possibly made locally.

Though the majority of the church is early 16th century, it incorporates fragments of an earlier 14th-century collegiate church; William de Marney founded a chantry chapel here in 1330, with provision for two priests under a warden. The current building consists of a nave and chancel, west tower, south porch, and a north aisle with a chantry chapel and priest's lodging.

One of the most interesting features of St Mary's is a large painting of St Christopher on the north wall. This wall painting almost certainly predates the early 16th-century rebuilding of the church and probably dates to the late 15th century.

Like most depictions of St Christopher in wall paintings, the Layer Marney version shows the saint in the middle of a river, the Christ child on one shoulder, his staff beginning to flower. Fish and eels wind through the water around the saint's legs, and an odd fish resembling a dog swims near his staff. On the river bank is a figure of a boy fishing.

Though much of the painting is very similar to other St Christopher paintings, the Layer Marney painting is unusual for the amount of detail in the saint's dress, and unique in that St Christopher carries a rosary. The painting was covered over around 1552 and only rediscovered in 1870. 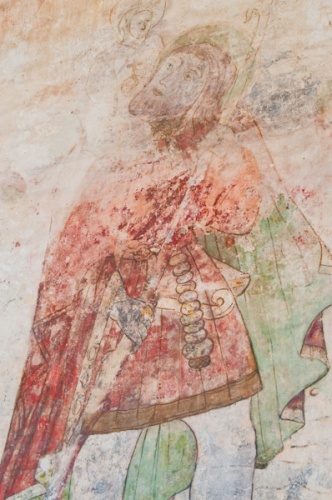 Aside from the wall painting the main historic interest in St Mary's are the Marney family tombs, ranging in date from 1360-1525. These are found at the east end of the north aisle. The earliest is that of Sir William Marney (d. 1360). This beautiful alabaster tomb shows a fully armed Sir William upon a table. The table is surrounded by a set of wooden posts carved with leopards; these posts originally decorated the tomb of John Marney, the 2nd Lord.

Lord John's tomb is nearby, a striking effigy of black marble atop a wonderfully carved terracotta table, similar in style to the famous Bedingfield terracotta tombs at Oxburgh. Interestingly, John's window Bridget is not buried with him; she lies at Little Horkesley Church.

As striking as Lord John's tomb is, it pales by comparison to the third tomb, that of his father Henry, the 1st Lord Marney. Lord Henry's effigy is also of black marble, similar to John's, but his table tomb stands beneath a beautifully decorated canopy made of terracotta, with classical pilasters and leaf decoration. The detail of the terracotta carving is exquisite. 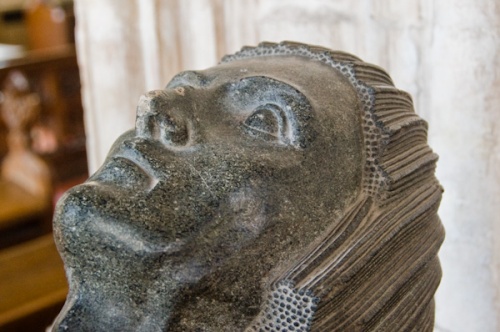 According to the terms of Lord Henry Marney's will of 1523 two priests and five bedesmen were to say Mass daily for the souls of Marney and his family. The fireplace was rebuilt to serve vestry meetings in 1870, then bricked up and plastered over in 1910. It was only rediscovered in 1969.

The east window of the chantry chapel has some lovely early 16th-century heraldic stained-glass panels. The glass survived the depredations of iconoclasts during the Reformation because the heraldic symbols are non-religious.

There are four escutcheon panels with smaller sections of grisailles glass painted with silver wings; the symbol of the Marney family. Below these family crests is a small panel depicting St Peter, probably brought here from elsewhere and inserted later.

Other interior features include a late 14th or early 15th-century oak chest, bound with iron straps. There are a pair of carved wooden angels facing each other on opposite sides of the chancel. The pulpit has been built up from several bits of 16th and 17th-century wooden panels, with a tester above, decorated with acorn pendants.

There are two screens; the rood screen is probably 15th-century work, with plain panels, and a later 16th-century screen is in the north aisle. 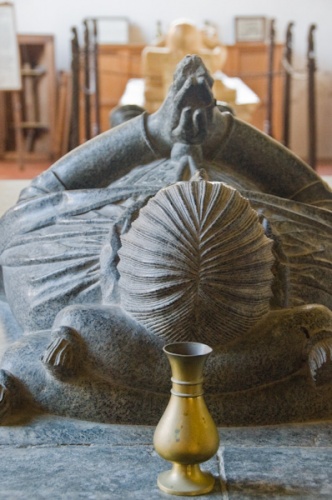 I came to Layer Marney to visit the mansion, but I must say that the church is every bit as interesting in its own right. This is a wonderful Tudor building, the Marney family tombs are beautifully preserved, as is the St Christopher wall painting. I highly recommend a visit. 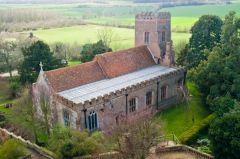 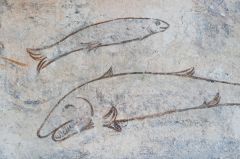 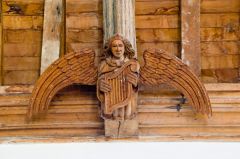 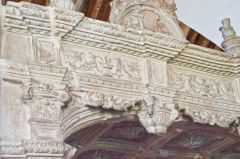 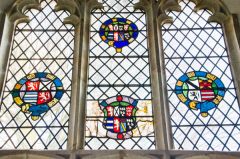 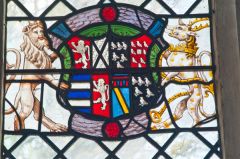 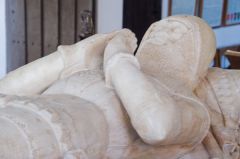 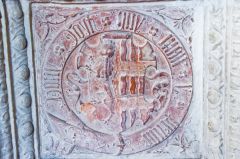 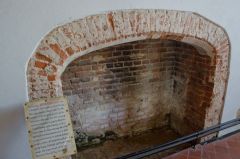 More self catering near Layer Marney