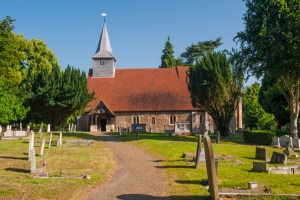 St Michael and All Angels, Copford

I don't always agree with Simon Jenkins, author of England's Thousand Best Churches - in fact, it is a bit of a running joke in my family how frequently I disagree - but when he includes Copford church in his list of Top 100 English churches, I admit I'm in total agreement.

Set in a pretty wooded glade on the edge of Copford village, about 4 miles west of Colchester, St Michael and All Angels is an architectural gem, justly famous for its superb collection of 12th-century wall paintings, early use of brick, and remains of unusual tunnel vaulting.

In AD 995 the Bishops of London were granted Copford manor and held the estate until 1559 when the Catholic-leaning Bishop Bonner refused to take an oath of allegiance to Elizabeth I. It seems likely that the Norman bishops visited Copford Hall regularly and built a church beside it to serve as a chapel, with construction beginning around 1130. 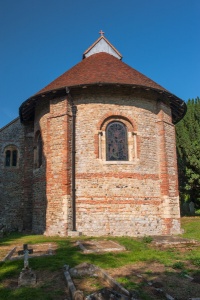 There is an interesting historical footnote about Bishop Bonner. He died in 1569 in Marshalsea Prison, London, and records state that he was buried in the churchyard of St George's, Southwark. However, in 1809 a workman uncovered a coffin with Bonner's name under the altar of Copford church. It seems likely that the Bishop's body was secretly moved from Southwark to Copford, probably shortly after his death.

The church is built of rubble mixed with Roman and medieval bricks. The most striking part of the building is a semi-circular eastern apse, a rare feature among English churches and almost unaltered since it was built. The style is thought to have been influenced by Roman buildings at nearby Colchester.

Another external feature is the west belfry, built in the late 14th century and attractively shingled in oak. Below, on the west wall, is a round-headed window opening built from Roman bricks, flanked with circular openings called occuli. These possibly gave access to an external balcony used for a pulpit or for display of relics. 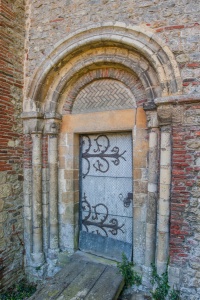 The blocked north doorway retains parts of its original hinges. There is a local tradition that a Dane was caught trying to plunder the church. As a punishment, he was flayed and his skin placed over the door.

In 1708 some fragments of what was thought to be parchment were found under the hinges. When the 'parchment' was analysed in the early 20th century it was found to be the skin of a fair-haired male.

So was the legend true? Well, only partly; it seems highly unlikely that the skin belonged to a Danish warrior, as the last Danish raids took place two centuries before the church was built.

It is much more likely that the skin belonged to a serf caught poaching. Early Norman justice was harsh, and a law of Henry I ruled that a bondsman (i.e. a man owing fealty to a lord) was caught even chasing a deer, he was to lose his skin. A free man, by comparison, would 'only' lose a hand for his crime. 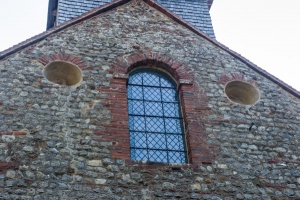 The original Norman nave was enlarged in the 12th-14th centuries by the simple method of punching holes in the south nave wall to create an arcade. It seems the builders miscalculated, and put in too many holes, weakening the structure, so that the tunnel, or groin vault, had to be pulled down to prevent the entire building from collapsing.

The result is a peculiar effect that the official church website describes as resembling a medieval lean-to. The Norman buttresses still exist, with stumpy arch springers (the base of the arch that supports the structure). The Norman vaulting was replaced by a rather attractive king-post timber roof.

Thankfully, all that medieval chopping and changing did not affect the Norman apse, the architectural highlight of this wonderful church. The apse is almost exactly as it was built in 1130, with a semi-domed vault that is an exquisite testimony to Romanesque style. The entire surface of the vault is covered with a superb wall painting depicting Christ in Majesty.

The colours are more vivid than you might expect from a 12th-century painting; that is due to a rather over-zealous restoration by a Victorian artist, but the essence of the painting remains, and it is utterly compelling, a true work of medieval art. 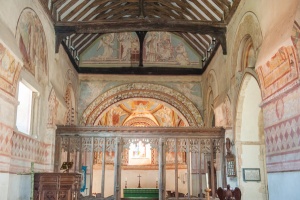 The nave and screen

When you walk into Copford church, be prepared to gasp aloud. It seems that every surface of the nave and apse is covered in wall paintings. The series of paintings covers 34 distinct Biblical stories, and the detail is extraordinary. The artist is thought to be Master Hugo, who worked at Bury St Edmunds in the 1130s.

Normal practice was for the master artist to draw the outlines and his assistants to fill in the details, much as later Renaissance artist studios worked. The drawings are frescoes, that is, drawn directly onto wet plaster. The paint was allowed to dry, then the details filled in after the plaster had been re-wetted.

Sections of murals were lost over time as arches were inserted in the original Norman building, but the remaining paintings were covered completely under layers of limewash in 1547. In 1690 sections of the painting were discovered by workmen, then in 1871, the limewash was carefully removed in the apse, revealing the figure of Christ in Majesty.

Artist Daniel Bell was brought in to restore the medieval artwork. Bell not only used the wrong type of plaster, causing damage to the original art, but he overpainted the medieval artwork, giving it a Pre-Raphaelite flavour in places. He also added details that were not in the original paintings. Also, in 1886 an unknown artist added figures over the chancel arch and west wall. 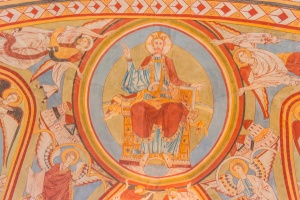 Christ in Majesty in the apse

Caveats aside, the original Romanesque paintings are utterly wonderful. The best is undoubtedly a depiction of 'the Raising of Jairus’s Daughter' in the first bay of the nave, near the pulpit. This shows Jairus’s daughter lying on a bed, her weeping mother beside her, while Jairus appeals to Christ for help. This painting has never been restored, only cleaned, and the detail is stunning.

Other scenes depict knights in mail, saints, angels, and a complete set of Zodiac symbols over the chancel arch. This is thought to be the only medioeval representation of all Zodiac symbols together in an English church.

Though it is hard to tear yourself away from the wall paintings, there are indeed other features of the church that deserve a look! Among these is a square 12th-century font with four corner posts and a central pillar. The bowl is decorated with blind arcading on all four sides. There is also a beautiful, almost overwhelming, gilded royal coat of arms. But of course it is the wall paintings that most people will come to see, and so they should.

I love visiting the great churches of Britain, but I love visiting quiet country churches even more. There always seems to be something wonderful to discover, even if its just a sense of permanence and heritage. Here at Copford that 'certain something' is amplified times ten. This is a wonderful little church, a marvellous example of Norman art and architecture, and a real slice of British heritage in a nutshell. Its a national treasure. 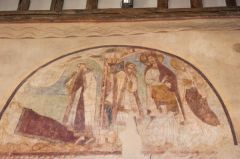 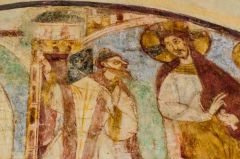 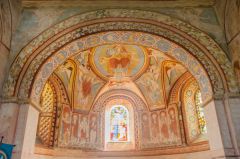 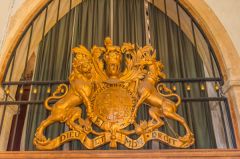 More self catering near Copford

More bed and breakfasts near Copford