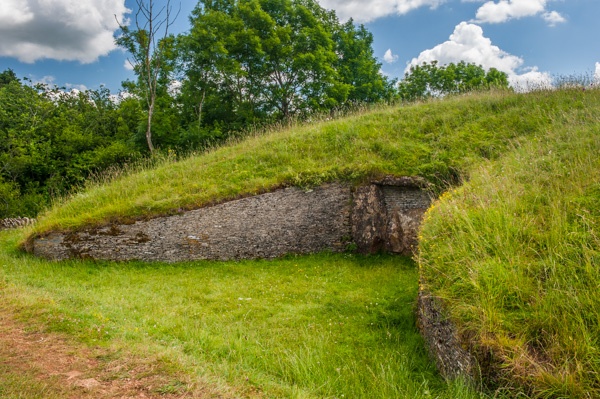 The forecourt of Belas Knap

Belas Knap is a chambered tomb dating from about 3800 BC. Thirty-one skeletons were discovered in the tomb, and these and other artefacts can be seen in the village folk museum in Winchcombe. Belas Knap is an outstanding example of a Neolithic long barrow.

Author's note: When I first wrote about Belas Knap in 1999, the accepted date of the tomb was 1400 BC; with the aid of modern research techniques and carbon dating this has now been pushed back well over 2000 years!

The tomb stands just below the crest of Humblebee How, a prominent hill, with fabulous views across the valley below, especially over Winchcombe and Sudeley Castle. The type of tomb is called a Cotswold Severn Cairn, and as you might guess from the name, is fairly typical of this area of the northern Cotswolds. The shape is trapezoidal, oriented north to south, with a high mound of earth tapering and sloping down to a point. The tomb is 55 metres long, about 20 metres wide at its widest point, and almost 4 metres high. As you might expect, erosion has accounted for a lot of wear and tear over the last 3000+ years, and the tomb was certainly much longer, higher, and wider when first built. 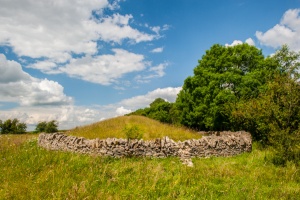 Belas Knap from outside the
surrounding stone wall

The wide, northern end of the tomb is curved, with projecting 'horns' to create a forecourt, a ceremonial entrance area. We do not know for certain, but it seems likely that forecourts were used for some sort of ritual observance as part of the act of burying the dead.

The forecourt is fronted by a false entrance; two upright stones flanking a lintel. This sort of false entrance is common, though again, we are not sure why they were built. Perhaps it was to create a symbolic representation of an opening into an underworld?

Other Neolithic long barrows in the Cotswolds have entrances to burial chamberes opening off the false front, but Belas Knap is different in that the 'front entrance' is no entrance at all.

Within the mound are four chambers, arranged with two on the east, one on the west, and one to the south. The chambers were originally topped by limestone slabs and formed with drystone walls.

The roof slabs have been replaced with concrete for stability, but the drystone walls are still in place.

Interestingly, each chamber had its own entrance from the side of the mound; none were accessed from the obvious front forecourt 'entrance'. So when the dead were interred and the chamber covered with earth and sealed, the burial chamber would have been invisible from outside the barrow.

Was this a simple, practical measure to counter grave robbing? After all, the pharaohs of Egypt built elaborate false passages and fake tombs inside their tombs to foil robbers. But when the burial chambers were opened they appeared intact, and there was very little in the way of grave goods, so the theory that the false front and hidden chambers was a deterrent to burglars doesn't appear to hold water.

It seems more likely that they performed a spiritual, ritual function of some kind. At least one of the chambers was opened during the Roman period because fragments of Romano-British pottery were found within. 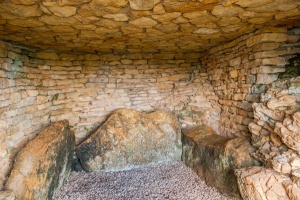 Inside one of the side chambers

The site was thoroughly excavated in 1863, 1865, 1928, 1929 and 1931. Archaeologists from the Ministry of Works found remains of five children buried beneath the lintel stone of the false front, along with one adult whose skull was an oddly round shape. A study of these remains dated them to between 4000-3700 BC.

The south-east chamber had remains of two males and two females, with animal bones and flint tools. The north-east and north-west chambers are aligned almost opposite each other, and between them archaeologists found a curious circle of flat stones.

What functions the stones performed is still a mystery. The north-east chamber contained remains of 12 people, while the north-west chamber had 14 skeletal remains. Curiously, the south chamber, entered from the tapering point of the barrow, contained only one single skeleton.

There is a small layby with parking for several cars on Corndean Lane (the minor road to Charlton Abbots). Please heed the posted warnings and do not leave valuable items in your vehicle! From the parking area, a moderately steep climb along a reasonably well-marked trail leads uphill through several fields to the site of Belas Knap.

The climb will take at least 10 minutes, but the resulting views are well worth the effort. If our 6 year-old-daughter can do it, so can you!

There are no facilities on site, save for a rather worn information panel when we visited. The site is nominally in the care of English Heritage but is maintained by the Gloucestershire County Council, and is accessible at any time. An even nicer way to get there is simply by walking the long-distance Cotswold Way trail, which passes directly through the site. 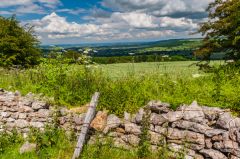 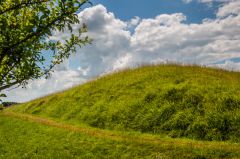 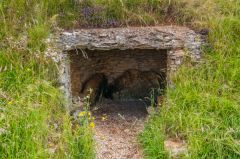 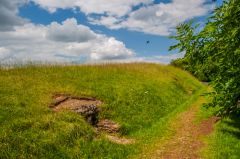 More self catering near Belas Knap