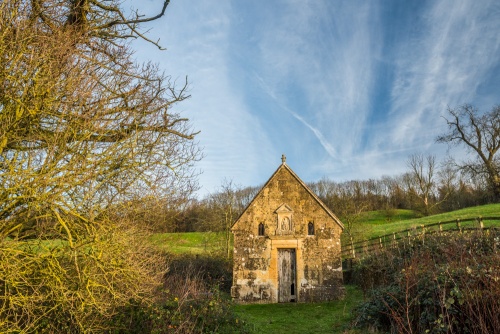 The rolling Cotswold hills near Winchcombe hold a secret, a hidden historic treasure that doesn't make it into tourist brochures. On the slopes of Winchcombe Hill, near Sudeley Hill Farm, stands a small 19th-century building erected over a well that has drawn pilgrims since the 9th century.

Kenelm was the son of a Mercian king named Kenwulph, who died in 819 AD when Kenelm was only 7 years old. Kenwulph (or Kenwulf) was the founder of Winchcombe Abbey. Kenwulph also had 2 daughters, Quendryda and Burgenhilda, both older than Kenelm. Quendryda was jealous of her younger brother and thought that if he was dead she could rule in his stead as queen. She had him slain by her lover, Askobert, who was Kenelm's tutor.

Askobert took the young king up into the Clent Hills, and beheaded him as the boy was singing a 'Te Deum'. The murderer buried the king's body and Quendryda banned all mention of his name throughout the kingdom, hoping that with time his memory would fade. 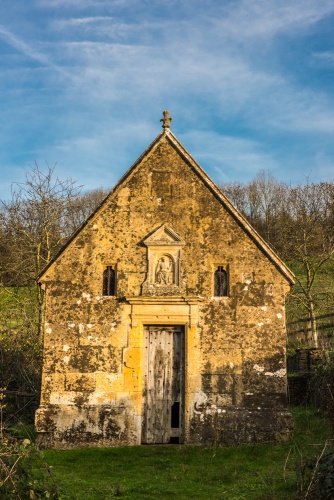 However, Heaven took a hand; the news of Kenelm's murder was brought to the Pope by a heavenly dove, and the Pope ordered the Archbishop of Canterbury to investigate. The Archbishop commissioned monks from the royal minster at Winchcombe to find the body.

As the monks travelled through the hills near Romsley, they saw a white light shining above a thicket. They dug and found the young king's body. As they lifted the body up, water sprang forth and flowed into a stream. The water of this stream afterwards became known for its healing qualities, and a well-head was erected by the spot.

The monks carried the body home, towards Winchcombe Abbey, but when they reached a ford across the Avon at Pyriford (between the modern villages of Croppington and Fladbury), they met a group of monks from Worcester Abbey who also claimed the body.

The two groups agreed that whichever of them arose first in the morning could have the body, and that proved to be the monks of Winchcombe. But the Worcester monks did not give up and pursued the Winchcombe group across the countryside. 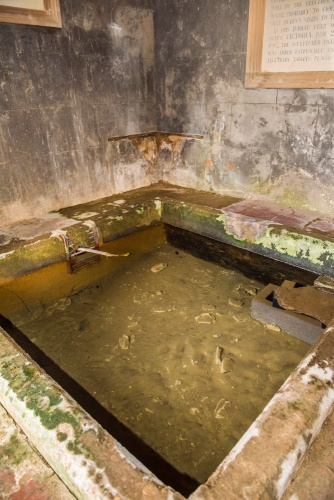 Inside the well chamber

The group carrying Kenelm's body were almost within sight of Winchcombe when they had to stop, exhausted by their efforts. as they struck their staffs upon the earth, a spring burst forth. Drinking of the water, they felt so refreshed that they were able to complete their journey and arrived at the Mercian Minster, where they were welcomed by bells that rang out without the aid of man.

Queen Quendryda was reading a Psalter when she heard the sound of the bells. She asked why the bells rang, and on being told that Kenelm's body had arrived, she cried 'if that is true, may both my eyes fall upon this book'. Her eyes immediately fell from her head upon the book.

She and her lover were put to death and their bodies cast into a ditch. St Kenelm was buried solemnly at Winchcombe and miracles were reported at his tomb.

As a result, Winchcombe gained great popularity as a destination for pilgrims, and the story of Kenelm is mentioned in 'The Nun's Tale' in Chaucer's Canterbury Tales. Not only did pilgrims visit the saint's shrine at Winchcombe, but the wells that marked the course of his journey from the Clent Hills.

Historical facts as best we can interpret them cast Kenelm in a different light. He signed several of his father's charters as early as 798 AD, which would make him considerably older than seven in 819 AD! He is said to have died in battle against the Welsh around 812 AD. Were there two Kenelms? Or has the story of the real Kenelm been so altered by time and popular legend that the truth is obscured? 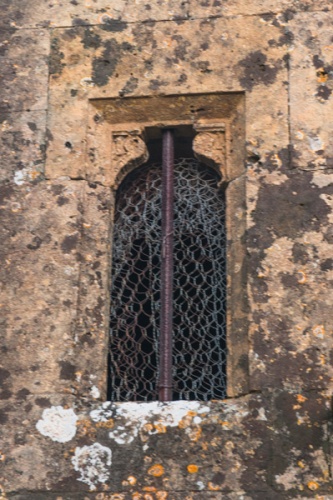 Window beside the entrance

The story of St Kenelm has been kept alive in popular culture, perhaps most famously by the 19th century Oxford Movement, which sought to revitalise the Anglican church by, among other things, emphasising local British saints.

Winchcombe Abbey no longer exists, but in the parish church of St Peter are two stone coffins discovered in the 19th century. These are thought to have contained the relics of Kenelm and his father Kenwulph.

A note about sources

The earliest written account of St Kenelm's life comes from a 12th-century manuscript at Winchcombe Abbey. This manuscript itself claims to be a copy of the tale written by a monk of Worcester named Wilfin. Where Wilfin got the tale is anyone's guess, so make of it what you will. 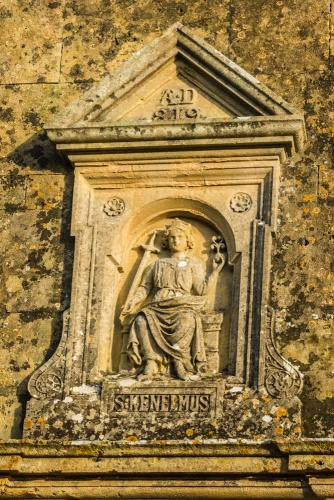 St Kenelm figure over the door

There was a 16th century chapel by the well, with a well-head beside it, but the chapel was torn down in 1830. In 1887 architect JD Wyatt rebuilt the well-head for Lord Chandos of Sudeley Castle, in honour of Queen Victoria's Golden Jubilee. The new well-head reused stones from the 16th-century chapel building. The only other remnant of the Elizabethan building is a window inserted in the wall of Sudeley Hill Farm in 1838.

The construction of the well-head is very simple, with a tiled roof, gables at each end, and eaves decorated with a simple dentile pattern. The walls are of large limestone blocks, and the only decoration is at the entrance end.

Here there is a pair of chamfered windows flanking a statue niche containing a relief carving of St Kenelm beneath a pediment. Kenelm is shown seated, carrying a sword in his right hand and an orb in his left. Above his head is the date AD 819, and below his feet is the Latin version of his name, St Kenulmus.

Inside the well-head is a stone basin filled with water, 4 feet wide and 2 feet deep, occupying most of the floor area, fed by an underground spring. There are three commemorative plaques erected in 1887 when the well-head was rebuilt. The largest plaque, facing the doorway, reads:

This well dating from Saxon times Anno Domini 819, marks the spot where the body of Kenelm, King and Martyr, rested on the way to interment in the Abbey of Winchcombe.

A Church was erected in the immediate vicinity for pilgrims attracted hither by the wonderful healing of the waters. All that now remains of that edifice (demolished Anno Domini 1830) is a window inserted in the adjoining farmhouse.

In the reign of Queen Elizabeth Lord Chandos of Sudeley enshrined the holy well by the erection of this conduit-house, probably to commemorate one of the Queen's visits to the castle.

In the Jubilee year of the reign of Queen Victoria, June 20th, Anno Domini 1887, the sculptured ffigure of St Kenelm was added externally and these three legendary tablets placed therein.

Though it looks like a small chapel, the well-head was used from its construction until 1930 as a pumping station to carry water to Winchcombe village. 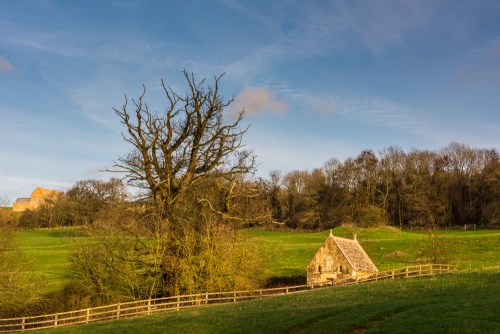 The well from across the fields

St Kenelm's Well is not the easiest place to find, and you will have to do some walking to get there! I drove back and forth on the minor road between Guiting Power and Winchcombe, hoping to spot a signpost, but had no luck. I don't think there are any signposts to the well, and there is no information on the site itself.

You really need a good OS map to find the site. You can reach it from either the Winchcombe-Guiting road I mentioned earlier or from the road heading north to Little Farmcote and Hailes. In either case, you need to follow the footpath that leads past Sudeley Hill Farm.

This joins the Winchcombe Way in the north at SP044282, and connects with the Winchcombe-Guiting road in the south at SP038276, about 700m east of the Sudeley Castle north entrance.

The well-head is often locked, though there is, rather incongruously, a picnic table outside the door. The wooden door was quite worn when we visited, either through weathering or from visitors tearing a peep-hole through the wood, and if you crouch down you can see inside the well chamber. I was able to stick the lens of my camera inside the opening to get a photo, so hopefully it will give you some idea of the atmosphere.

The countryside setting is fabulous, with green Cotswold hills all around, and the roofs of Sudeley Castle visible from just up the hillside. The track can be wet so I highly advise good footwear. The well isn't compelling in itself, but for the story of Kenelm, the legends associated with his death, and its relationship with the once-important abbey of nearby Winchcombe.

On our latest visit, the door to the well chamber was unlocked and we were able to explore inside. It's a very simple interior, and most of the obvious stonework is Victorian, but the floor of the well itself still has quite rough stones. I wonder how many hundreds of years they have been there, untouched? This is a place where time lingers, and there is a lingering aura of antiquity about the site.