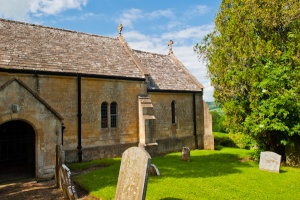 It is hard to imagine a more beautifully situated country church in England. The tiny rural church of St Martins stands on the sloping crest of a high hill near Winchcombe, with views across green fields and the valley below. The location is idyllic, and to come here on a sunny summer's afternoon is an experience to be savoured and held long in the memory.

The church dates to the 13th century and is part of the Coln River group of churches. The name of the village harkens back to its association with the monks of Winchcombe Abbey. The abbey established a walled leper colony here, taking advantage of the isolated site. No trace of that leper colony remains, but the tiny church still stands, though it was heavily remodelled in the 18th century.

As population density changed in the 18th century the church fell into disuse; in 1712 it was reported that the inhabitants buried their dead at Sevenhampton or Winchcombe, and as late as 1779 St Martin's was called 'ruinous'. However, the church was restored late in the 18th century and again in 1886, giving us the simple rustic building we see today. 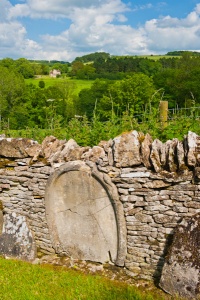 St Martin's solitary bell dates to 1346 and is resident in a small gabled bellcote at the west end of the nave, for there is no tower.

There is good Victorian glass within the church, particularly in the chancel, where the glass was produced by the Warrington & Co. firm. The west window is a memorial to three soldiers from Charlton Abbots parish who died in World War I.

There is a simple 13th-century tub font on a Victorian base, and a pointed chancel arch. The south door is a very simple Romanesque style arch, and the lectern is a nicely carved wooden likeness of a rather haughty eagle.

In truth, though, you don't come to Charlton Abbots for the historical features, but to drink in the fantastic scenery.

VISITING CHARLTON ABBOTS
It is not easy to find the church; we drove past the footpath twice before we noticed the small sign saying 'To the Church'. But happily, Charlton Abbots is so small that you should be able to park anywhere near the solitary dead-end lane through the village and walk down the sloping path to the church.

You won't see the church from the road; there is no tower to give you a hint that it lies hidden beneath the slope of the hill. Just look for the small signpost near the [only] road junction in the centre of Charlton Abbots village.

About Charlton Abbots
Address: Charlton Abbots, Cotswolds, Gloucestershire, England, GL54 5TF
Attraction Type: Historic Church
Location: Off the minor road between Winchcombe and Sevenhampton. Usually open. The church is not visible from the road, so park at the junction of the road into the village and follow the signed footpath downhill.
Location map
OS: SP033243
Photo Credit: David Ross and Britain Express

More self catering near Charlton Abbots