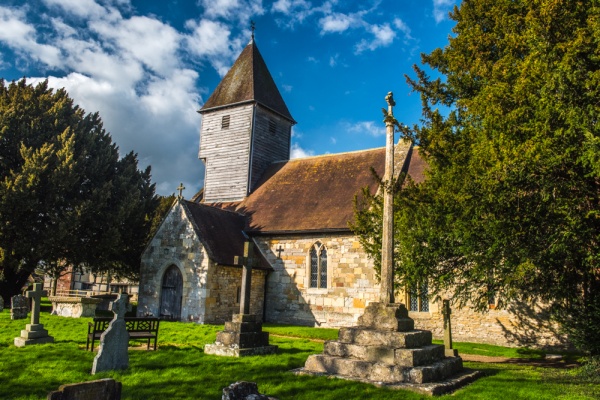 The 12th-century church of St John the Baptist in Tredington is known for its picturesque wooden tower, which dates to at least the Tudor period. The unusual tower is made entirely of timber. Its odd shape makes it look like a dovecote, and gave rise to the local nickname of 'the pigeons house'. The tower appears in a popular piece of doggerel;

Another version of the poem calls the parson funny and the people wicked! 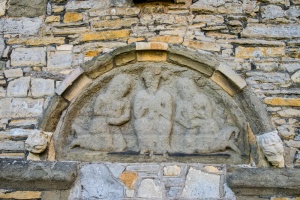 The church stands beside the ancient road between Tewkesbury and Gloucester, known as The Ridgeway. On 3 May, 1471 Edward IV marched past the church, on his way to the Battle of Tewkesbury. Edward spent the night at Tredington Court before marching into battle the following day, and the victory that gave him the crown.

In the churchyard is a slender cross on a stepped plinth. The cross is 14th century, stands over 12 feet high, and is made from a single piece of stone. It is medieval, though the cross-head itself is Victorian.

Walk around the church to find a blocked north doorway. Over the former doorway opening is a 12th century tympanum, with a worn carving of three figures. The tympanum is usually interpreted as depicting Christ in Glory flanked by angels, or as Christ adored by two evangelists, but if the central figure is indeed Christ, it is very unusual that he is not shown with a halo.

Embedded into the floor of the south porch is the fossilised skeleton of an ichthyosaurus (literally an ancient 'fish-lizard'). The fossil is thought to be a marine reptile of the Jurassic period, about 175 million years ago. The fossil was probably discovered in a block of construction stone brought to Tredington from the quarry at Boddington. 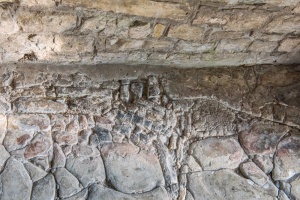 The south doorway arch is early Norman, though the carvings on the doorway pillars may be late Saxon. There is also a Norman window in the south wall of the chancel. In the north chancel window is a fragment of medieval glass depicting the crowned head of a bearded king.

This is thought to represent Edward II, who was buried at nearby Gloucester Cathedral after his murder in 1327. Also in the chancel is a very long, low stone bench set against the north wall. This is an extremely unusual feature, and I can't recall seeing a stone bench so long in any English church.

The chancel arch is Norman, and beautifully carved. You can see traces of the medieval rood cross above the arch.

On the west wall of the nave is a coat of arms to the local Surman family, lords of the manor at Tredington Court for over 300 years. The pulpit, font, altar rails, and altar table are all Jacobean work. One unusual feature is the plastered ceiling of the nave, decorated with delicate plasterwork figures of flowers and human faces.

St John's church is usually open to visitors during daylight hours. And while you are there, don't miss the attractive timber-framed Manor Farmhouse beside the churchyard. 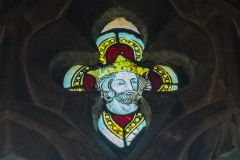 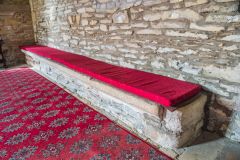 More self catering near Tredington, St John the Baptist Church