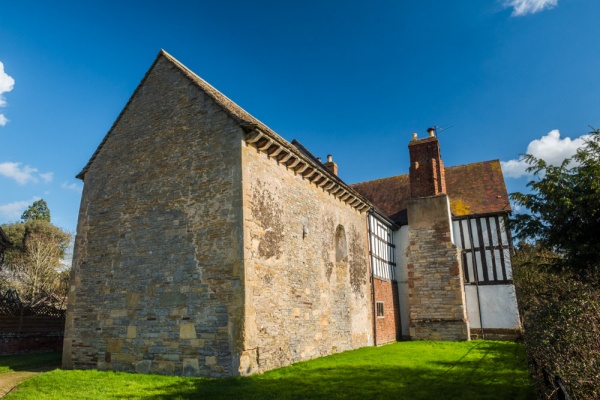 One of the most complete Saxon churches in England, Odda's Chapel dates to the period shortly before the Norman Conquest. It was erected around 1056 by Earl Odda, one of the most powerful of Edward the Confessor's nobles.

One of two intriguing Saxon churches in the small village of Deerhurst, Odda's Chapel is a simple two-cell church composed of a nave and chapel. It was in use until the 13th century and then probably stood derelict for some time before being made part of later buildings. In the 16th or 17th century it was incorporated into Abbots Court, a large farmhouse. The chapel nave was used as a kitchen and the chancel as a bedchamber. 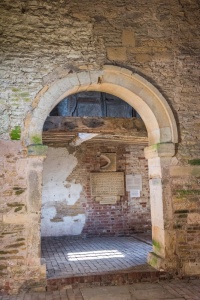 There was almost certainly a Roman villa at Deerhurst; excavations in a field to the south of the chapel have unearthed pottery, a chapel, and Romano-British building materials.

Sometime in the 7th century, a Saxon monastery was founded here, and the church of St Mary's is associated with that monastery. We know that the church existed before 804 AD. Around 970 the monastery was refounded as a Benedictine priory.

In 1059 Edward the Confessor gave Deerhurst Priory to St Denis in France, and it stayed an alien priory until 1443. It was then granted to Tewkesbury Abbey, who maintained four monks and an abbot here until the Dissolution of the Monasteries in 1540. After that, the priory church became the local parish church.

But back to the Saxon period; Deerhurst was part of a Saxon royal vill; an oval enclosure contained within banks and ditches. The chapel stands in the northern section of the vill. In 1016 King Cnut met Edmund Ironside here at Deerhurst to decide how to partition England.

Discovery of the lost Chapel

For centuries the existence of the chapel was unknown until in 1856 it was rediscovered by Rev. George Butterworth. Butterworth was a scholar who was intrigued by an entry in the chronicles of Tewkesbury Abbey, which described a church opposite the entrance to Deerhurst Priory.

Even more intriguing was an inscription on the Odda Stone, a Saxon carved stone found near the parish church in 1675. The mysterious inscription says in part

Earl Odda had this Royal Hall built and dedicated in honour of the Holy Trinity for the soul of his brother Aelfric, which left the body in this place. Bishop Ealdred dedicated it the second of the Ides of April in the fourteenth year of the reign of Edward, King of the English.

In other words, Earl Odda, known to be one of King Edward the Confessor's most powerful allies and administrators, had a building erected at Deerhurst in memory of his brother Aelfric, who had died at Deerhurst. The original Odda Stone is now at the Ashmolean Museum in Oxford, but a cast copy is on display at the chapel. 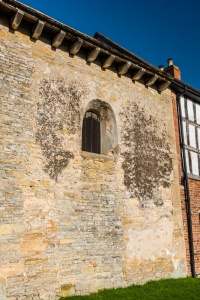 Documents show that Edward gave a chapel at Deerhurst, and the entire manor, to his new Abbey at Westminster shortly before he died. Rev. Butterworth found the chapel, buried behind the external structure of Abbots Court.

As we saw earlier, the chapel is a very simple two-cell structure, with a simple nave and chancel. The chancel is separated from the nave by an extremely simple chancel arch just over 10 feet high and curved into a slight horseshoe shape. The building material is blue lias stone, quarried locally. Like many Saxon churches, Odda's Chapel is narrow and high, with the nave walls reaching 5.2 metres (about 17 feet).

There were originally two doors opposite each other in the north and south walls, but the south door has been blocked. The construction features traditional Saxon stonework, with long and short quoins supporting the corners.

Other original Saxon features include the south window and north doorway. The south window still has some original oak framing. In the nave, you can make out the location of a fireplace inserted in Tudor times. The chancel is the most heavily altered part of the building, with a second floor inserted when it served as a bedroom.

There is a small car park outside Odda's Chapel (free, but donation requested). From the chapel, it is a short walk to the Saxon parish church of St Mary's. The chapel is open daylight hours throughout the year and there is no admission charge. The church is also open daily.

I absolutely loved the combination of the chapel and the glorious Saxon church. 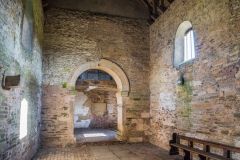 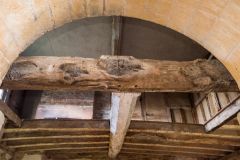