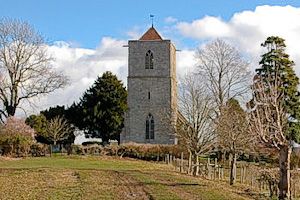 Pendock Old Church
The Saxon church of Pendock stands directly beside the busy M50 motorway; an odd juxtaposition of new and old! The church is primarily Norman, but the font is clearly Saxon, probably as early as the 10th century, suggesting a much earlier church on the site.

To the north of the church are earthworks which may mark the location of an abandoned medieval village and the site of a manor house associated with the de Pendock family.

Though the core of the church is Norman, there are 14th-century windows and a west tower of a similar date.

The interior has some interesting furnishings, including Elizabethan pews and Jacobean communion rails. There is a small 18th-century organ which may have been played at one time by composer Sir Edward Elgar.

Pendock church is not in regular use and is cared for by the Churches Conservation Trust.