HERITAGE HIGHLIGHTS:   One of the largest medieval barns in England 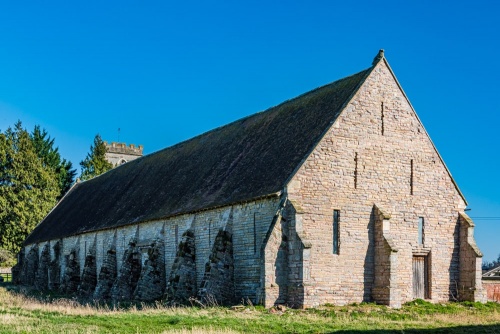 A 14th-century barn once owned by St Peter's Abbey in Gloucester stands in rural splendour amidst a remarkable collection of other historic buildings, down a country lane from the Gloucestershire village of Hartpury.

The barn, one of the largest in England at 161 feet long and 36 feet wide, was built in the 14th century to store produce from the Hartpury Manor estate. In the early 16th century the manor house was rented out, but it appears that the abbey retained the barn and a neighbouring pigeon house, or dovecot. 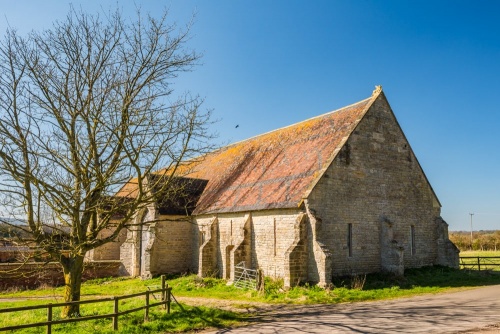 The barn from St Mary's Church

To give a bit of context to the historic buildings that make up the Hartpury Court estate, including the barn, a bit of history is in order.

After the Dissolution of the Monasteries under Henry VIII, the estate was purchased by a wealthy cloth merchant named Walter Compton. Compton rebuilt the abbot's dwelling to create a manor house suitable for his status.

The Comptons converted to Catholicism at the time of the Civil War, and in 1686 a mob of anti-Catholic protestors attacked Hartpury Court, ransacked the house, and destroyed the chapel.

The estate fell into heavy debt in the 18th century, in part because of heavy fines levied on the Comptons for remaining Catholic. In 1794 the owners offered Hartpury Court to a group of Dominican nuns uprooted by the Napoleonic Wars. The nuns ran a school for girls to make ends meet, until leaving in 1839. The nun's chapel, built in 1829, has been restored and stands across the road from the barn. 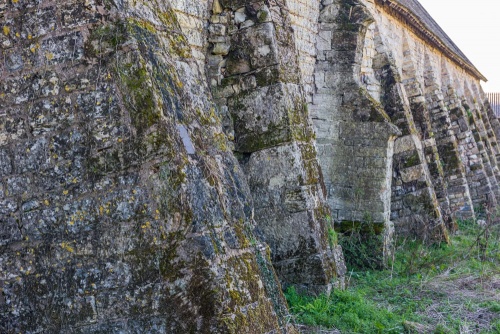 The manor house we see today is not the Elizabethan one, but a 19th-century house built in the garden of the old manor. It was designed by the architect Benjamin Bucknall, more famous for the unfinished mansion of Woodchester Park, also in Gloucestershire

Technically, Hartpury Tithe Barn is not a tithe barn at all. A tithe barn was used to store church tithes; one-tenth of all produce from an estate or region. In Hartpury, the barn served to store all the estate's produce, not simply a tithe. 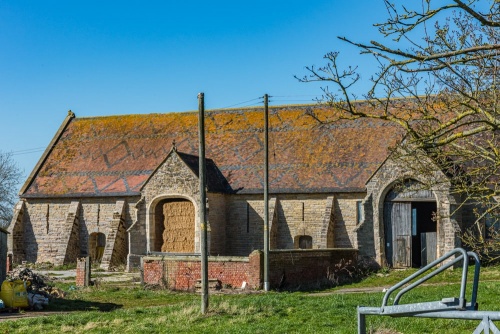 The south facade and porches

The barn extends for 11 bays, with two large gabled porches set into the south wall. Blocked openings in the north wall suggest that there were matching doors on that side. The north wall is supported on ten buttresses of different sizes and designs. There are corner buttresses at each end, and a central buttress in each gable end.

There are six more buttresses in the south wall, and each porch has two angled buttresses. Clearly, the huge load of the barn's roof and walls required a lot of extra support.

The roof is of red and blue tiles, with the blue tiles forming a diamond pattern on the south side. When we visited, the eastern porch was open, but the western porch was being used as a storage area for bales of hay, stacked up to the ceiling and completely blocking the opening. The area between the two porches has been partially enclosed by a low brick wall. 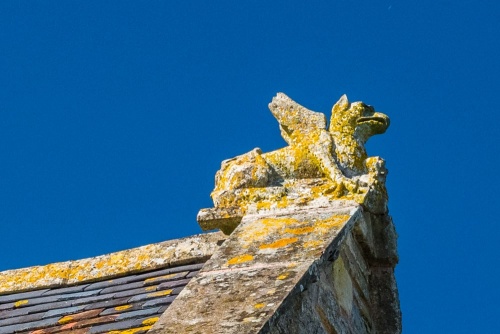 Please Note: the barn stands on private land and there is not usually any public access. That said, it stands so close to the road junction that you can very easily explore the exterior simply by walking along Murrell's Road and Park Road. 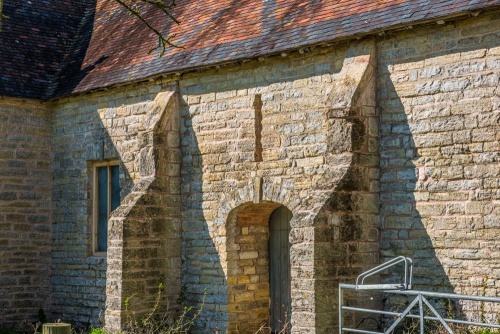 The tithe barn stands immediately opposite St Mary's Church at the meeting of Park Road and Murrell's Road. The church is signposted off the A417 in Hartpury village. Look for the brown tourist signs to the church and bee shelter. There is parking outside the church.

Don't miss the chance to explore Hartpury's wonderful collection of other historic buildings including the church itself, the bee shelter, Old Dominican Chapel, and Hartpury Watermill, a short stroll down the road.