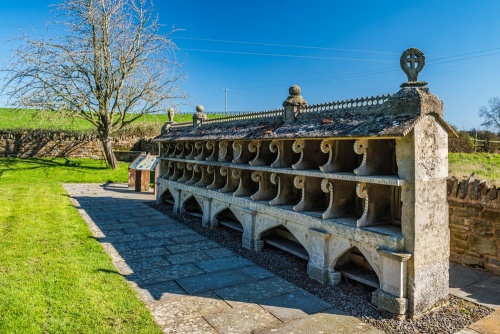 Behind the historic 12th-century church in the Gloucestershire village of Hartpury is a relic of a bygone age; a bee shelter dating from the middle of the 19th century. The ornate stone shelter has 28 stone niches, or boles, under a neoclassical stone roof topped by ball finials.

The bee shelter was created sometime before 1850 by a stonemason and quarry master from Nailsworth named Paul Tuffley, who used stone from his family's own quarries.

Tuffley assembled the bee shelter in the ornamental garden of his house, but the mystery is why. It seems likely that the shelter had to be reduced in size to fit into the garden, which suggests that it may have been made for a client who then defaulted on payment. Another possibility is that the bee shelter was intended to act as an advertisement for the Tuffley quarries and masonry skills. 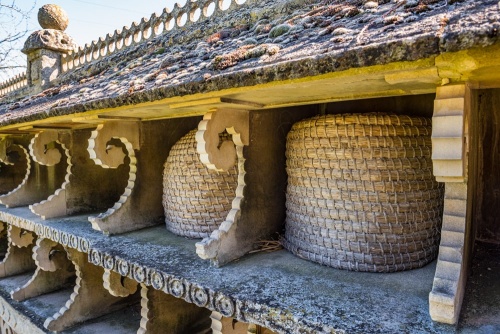 The bee boles and skeps

The Tuffley quarries supplied stone for the Palace of Westminster in London when the palace had to be rebuilt following a disastrous fire in the 1830s, but they could not retain the contract and by 1852 the family home was put up for auction when Tuffley could not pay his mortgage.

The Tuffley home became part of the Nailsworth police station, but when the station closed in the 1960s and the site was scheduled for development, the bee shelter was in danger of being destroyed.

The Gloucestershire Beekeeping Association stepped in to save the bee shelter. They dismantled it piece by piece and reassembled it in the grounds of Hartpury Agricultural College.

Over time, the shelter weathered and began to show signs of decay. Hartpury College gave the shelter to the Hartpury Historic lands and Buildings Trust, who had it restored and re-erected at the back of the St Mary's Church burial ground. 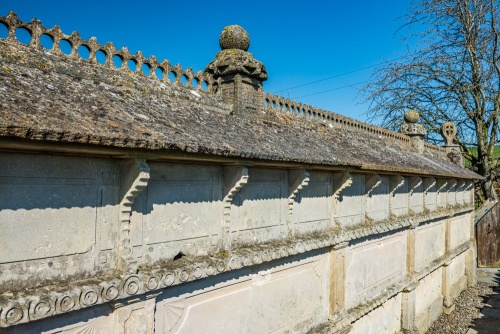 The south face of the shelter

The bee shelter is 7.1m long, 2.5m high, and 75cm wide (about 25'x8'x2'6") and is made up of two rows of 14 boles each, above five wide shelves. The decorative detail is extraordinary; the base is decorated with neoclassical Doric columns and the tiled gable roof is topped by an elegant ridge crest supporting a pair of ball finials and Celtic crosses above each gable end.

The finials, roof tiles, columns, bases, ridge crests, and plinths were originally of weatherstone from Minchinhampton, where quarries were leased by Tuffley before 1856. The remainder of the bee shelter users freestone from Painswick. You can still see the axe and saw marks left by the Victorian stone sawyers. 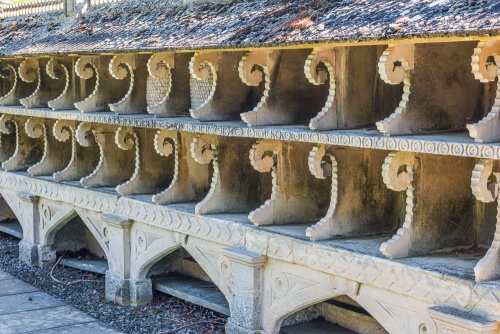 The bee shelter has been restored to its original appearance using weatherstone from Minchinhampton and freestone from the original Balls Green quarry at Nailsworth, even though the quarry has been closed for many years. The shelter is oriented towards the north, as it was in Tuffley's garden in Nailsworth, even though it would have been more typical for beekeepers to orient shelters towards the south.

What is a bee shelter?

Let's be clear on what a bee shelter is and isn't. It is not a beehive, either natural or manmade. It is, rather, a structure made to protect traditional straw or whicker bee skeps. The dome-shaped skep was the forerunner of the wooden beehives that beekeepers began to use in the middle of the 19th century. 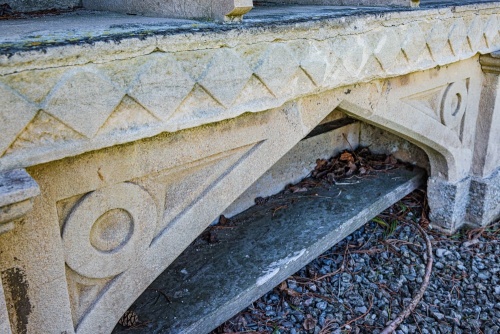 These skeps were often set into niches in garden walls to protect them from the elements, but just as often they were protected by shelters of timber or stone. These shelters had covered cubicles for individual skeps and were often quite elaborate.

The earliest bee skeps were made of whicker, but coiled straw was later used. The skep was able to support a colony of about 15-25 litres compared to roughly 40 litres in a modern brood box.

Beekeepers were always keen to increase the number of colonies under their care. They would try to catch swarms leaving a skep and place these bees in a new skep, encouraging them to begin a fresh colony. Honey was harvested in the autumn by burning sulphur under the skeps, thereby destroying the heaviest-producing colonies, while the intermediate colonies were kept alive in their skeps over the winter months. 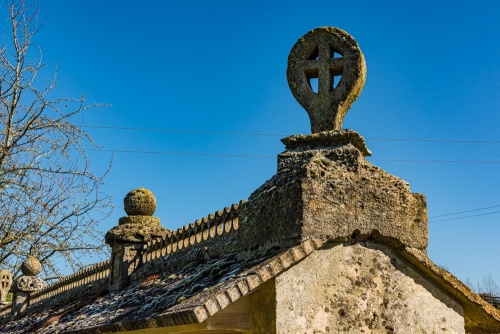 The ridge crest and westernmost cross

Honey has played an important part in the history of Hartpury since at least the Saxon period. The Domesday Book of 1086 recorded that Gloucester sent 24 lbs of honey to the Crown each year, and in 1260 the tenants of Hartpury paid their rent to Gloucester Abbey in honey.

Hartpury Church is signposted off the A417 in Hartpury village. Look for the brown tourist signs with symbols for the church and bee shelter. There is parking outside the church, which is well worth a visit in its own right. To find the bee shelter, simply go through the churchyard gate and take the path that branches off to your left. Follow this path to the eastern end of the churchyard and you will see the bee shelter immediately beyond the churchyard wall.

The church and bee shelter form only part of an extraordinary collection of historic buildings at Hartpury. Outside the churchyard to the south is a chapel built in 1829 by the nuns of Hartpury Court, the 19th-century manor house that stands on the site of an earlier medieval house owned by the Abbot of Gloucester.

Across from the church is a 14th-century tithe barn owned by the Abbey of St Peter in Gloucester, while a short stroll along the road brings you to a 17th-century watermill.

Note: Just in case you are worried about approaching beehives, let me reassure you that the Hartpury Bee Shelter is not actively being used to raise bees!