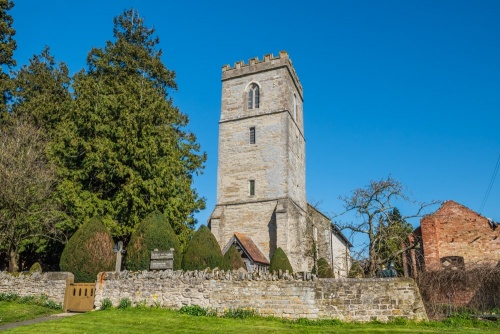 Hartpury's delightful 11th-century parish church stands down a long country lane, far from the village centre. The church stands at the heart of a complex of historic buildings that together make up one of the most intriguing and compelling historical sites in England.

Within a stone's throw of each other are a 17th-century watermill, a medieval tithe barn, a 19th-century manor house, a former Dominican chapel, and a unique 19th-century bee shelter.

From its origins, St Mary's Church was owned by St Peter's Abbey in Gloucester (now Gloucester Cathedral). Before that first church was built, visiting priests are thought to have preached outside under a perry pear tree, and the strong links between the church and the local tradition of growing perry pear trees continue to this day. 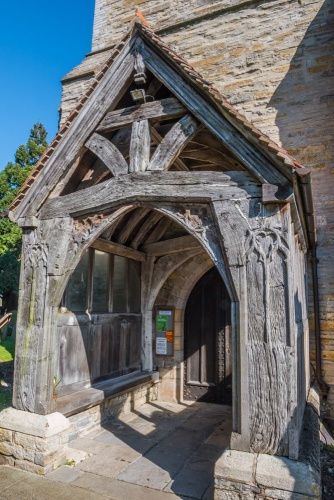 The church we see today was built in the early Norman period, almost certainly before 1100. Look for a blocked Norman window of this date high on the north nave wall. Also from around this period are the wide chancel arch and the blocked south door.

That 11th-century church was rebuilt in the 14th century. One of the best-preserved 14th-century features is the picturesque timber west porch. 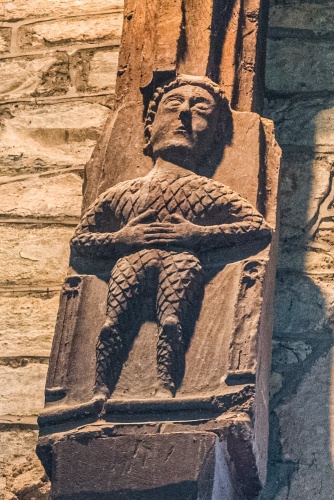 Interior highlights include a pair of 14th-century carvings decorating the roof timbers. One is a wonderful example of a Green Man, a pagan fertility symbol adopted by early medieval Christian churches as a symbol of rebirth.

The pulpit is Jacobean, decorated with traditional strapwork carving motifs. The octagonal font is in Perpendicular style, common to the 15th century, and is topped with a wooden cover dated 1668. A small amount of medieval glass has survived and is gathered in the north-east window of the nave. 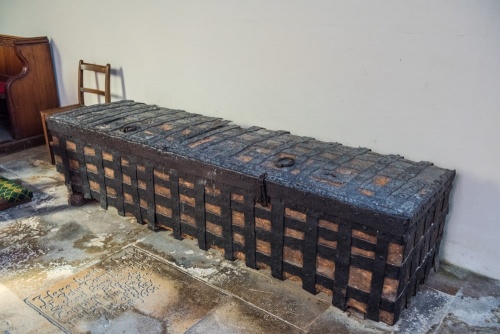 There are several good 18th and 19th-century monuments including one on the south wall to Thomas Biddle (d 1728). The memorial bears the following epitaph:

'O cruel Death to take him hence so soon,
To let his sone go down before 't'was noone;
His life was much desir'd with weeping Eyes,
But oh all is in vaine when God denies.'

The oldest memorial that I was able to find was that of John Compton, Gentleman, who died in 1660. The most elaborate memorial is an ornate wall tablet to Ann Webb (d 1701) and her daughter Ann (d 1709). The memorial is beautifully carved with foliage and figures of cherubic angels.

At the east end of the south wall is a small plaque in Latin to Robert Clark, dated 1901. In the chancel is perhaps the largest parish chest I have ever seen, a huge medieval chest bound with heavy iron straps. 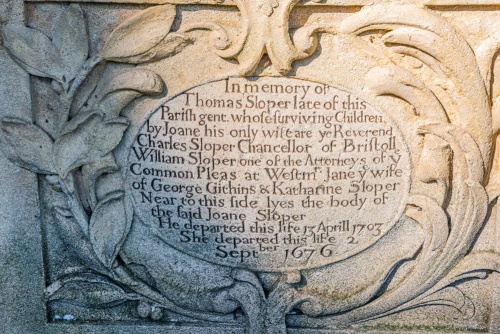 It is well worth exploring the churchyard, which is planted with several varieties of rare fruit trees. One of these is a Hartpury Green pear tree, planted in 1999 when the variety was all but extinct. The oldest gravestone in the churchyard is that of John Hale (d 1692) who was crushed to death by a bell.

A short stroll from Hale's gravestone is the most impressive monument in the churchyard, that of Thomas Sloper (d 1703). Sloper's memorial is topped by a worn effigy of his wife Joane (d 1676). This is thought to be one of the earliest examples in Britain of an effigy used on an exterior tomb.

In the north-east corner of the churchyard is the gravestone of Evan and Eleanor Williams (d 1907 and 1905 respectively). The Evans' daughter Martha was married to John Pritchard, who inspired Beatrix Potter's character of The Tailor of Gloucester.

Also buried in the churchyard are nine Dominican nuns from the neighbouring convent, and two of their chaplains. The graves cover the period 1800 to 1833. North of the churchyard, between the picturesque manor house and the church, stands the Old Dominican Chapel, now used as a community hall. The chapel was built by the nuns of Hartpury Court in 1829. After years of neglect, including a period of use as a chicken shed, the chapel was restored by the Hartpury Historic Buildings Trust.

Hartpury Court was once a country retreat owned by the powerful Abbot of Gloucester. You can still see traces of the medieval moat that surrounded the original Court, which was pulled down to make way for the present 19th-century building.

On a rise of ground directly beyond the eastern end of the churchyard stands a unique 19th-century bee shelter brought here from Nailsworth. With holes for 33 straw bee skeps, the shelter was preserved from decay by the Hartpury Historic Buildings Trust. Information panels explain how the shelter was built and how it was used. Directly west of the churchyard stands Hartpury Tithe Barn, built in the 14th century when the estate was under the control of Gloucester Abbey to store grain and other agricultural produce. The tithe barn is one of the largest in England at some 161 feet long.

A short walk down the lane from the churchyard brings you to a picturesque watermill on the River Leadon. The mill dates to at least the 17th century though it stands on a site that has been in use since the time of the Domesday Book. The mill is on private land but there are very good views from the road, across the placid mill pond.

A few miles away at Blackwell's End is the Hartpury Orchard Centre and National Perry Pear Collection, preserving old varieties of perry pears.

Hartpury Church is on a minor road off the A417 in the centre of the village (signposted to Highleadon). Look for the brown tourist signs labelled 'Hartpury Church & Bee Shelter'. Follow Corse End Road until it becomes Park Road and you will see the church to your left. There is parking outside the churchyard.