HERITAGE HIGHLIGHTS:   An ancient landscape of hedges and fields that formed part of Corse Forest 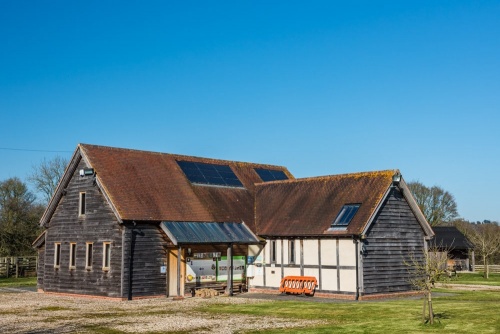 In a delightful rural setting beside Collier's Brook stands the Hartpury Orchard Centre, home of the National Perry Pear Collection. The centre is a specialist training venue for cider and perry making and is surrounded by 30 acres of orchards that boast over 100 varieties of fruit.

Two trees of each variety have been planted, making the orchards here a little like the Noah's Ark of the perry pear world!

The orchards are open to the public year-round and offer colour-coded walking trails, wildlife ponds, and a bird hide. The orchards are a haven for wildlife, with a mix of habitats formed by ancient hedgerows and modern ponds and marshes fed by the brook. 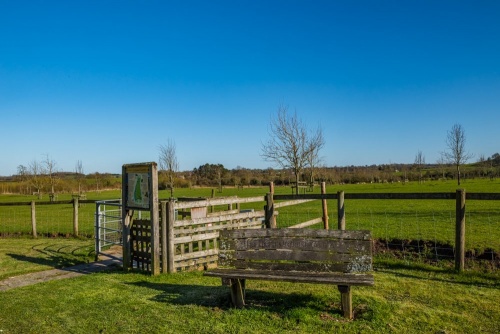 The Orchard Centre is part of a historic landscape that was once part of Corse Chase, a vast hunting forest that extended from the Malvern Hills to the Severn Valley. The settlements we seer today surrounding Hartpury grew out of scattered hamlets built in forest clearings.

The perry trade took off in the 17th century when glass bottles became strong enough to contain the fermenting alcoholic perry, which could then be shipped long distances. 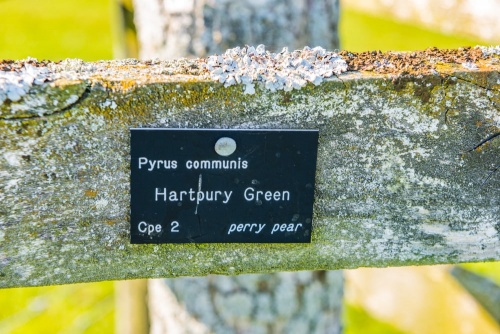 Each variety of perry pear is labelled

Even the name of the village speaks to the long local tradition of making perry; Hartpury comes from the Hardpirige, or hard perry pear. The best-known variety of perry pear was the Hartpury Green. Perry made with the Hartpury Green pear was once described by a Victorian clergyman as 'a drink so strong as to be inflammable.'

The Hartpury Green was first recorded in 1650, but by the 1990s it was all but extinct. A concerted programme of planting has saved the variety from disappearing entirely. An example grows in St Mary's churchyard, along with other local varieties.

The Orchard Centre hand-presses perry and cider, which is for sale in the Centre's shop. They also offer training to people from all over the world to spread traditional methods for brewing perry.

We visited the Orchard Centre in early spring, when the trees were bare, which explains why none of the photos accompanying this article show perry pears! We'll have to make a return visit to see the orchards when they are lush with ripe fruit. 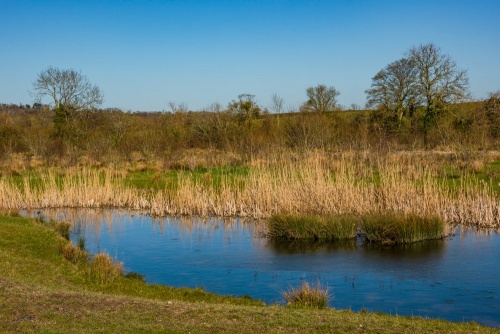 Trails lead through orchards of mixed perry pears, each carefully labelled, to a large orchard of Gloucestershire apple varieties. Along Collier's Brook are reed beds and a duck marsh, with a rustic bird hide looking out on the still water.

Wetland insects abound, and a group of volunteers meet monthly to record varieties of moths. 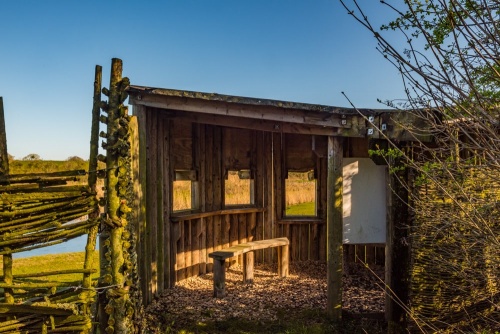 The Orchard Centre isn't the easiest place to find. We never did see any signs guiding us to the Centre, but if you follow our instructions you won't go wrong. From Hartpury village follow the brown tourist signs for the church and bee shelter. This takes you onto Corsend Road.

You leave the village behind and find yourself in open countryside. after about 1 mile take the turning on your right for Blackwell's End. Follow the road north for about 1/2 mile and you will see the Orchard Centre off to your right.

If the gates are closed (and they often are) you will find enough space on the verge for 3-4 vehicles. Even if the Centre itself is closed you can still explore the orchards and enjoy the bird hide. Just look for the kissing gate to the right of the main gates. 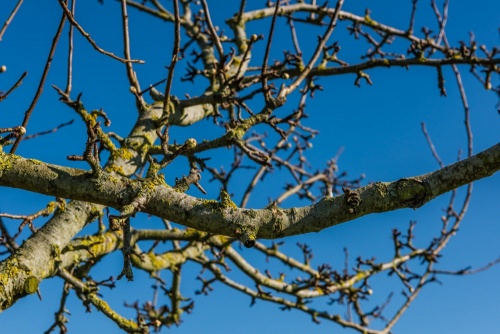 A perry pear tree in March

Once through the gates, the orchards are off to your right, beyond a wooden fence, but it is worth taking the time to read the information panels on the outside of the Orchard Centre, which explains about how perry pears are grown and harvested, and a bit of the history behind perry.

The Orchard Centre is just part of a remarkable collection of historic sites, most under the care of the Hartpury Historic Land and Buildings Trust, which includes a 17th-century watermill, a medieval tithe barn, an early 19th-century Dominican chapel, and a unique 19th-century bee shelter, tucked behind the 11th-century parish church. It is well worth setting aside several hours to explore all the historic places in Hartpury.

Even Blackwell's End road is historic; it is thought to be an ancient track linking Hereford and Gloucester and is lined with old varieties of oak, wild pears, and apples.