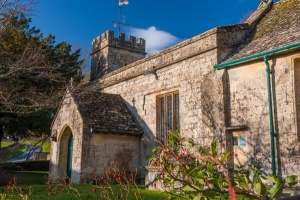 The delightful country church of St Michael stands in an idyllic setting amid farm buildings - including a medieval tithe barn, on the edge of Yanworth, looking out across a wide green valley to the mansion of Stowell Park. This Grade II listed building dates to the 12th century.

At the west end of the nave is a low, castellated tower built in the 15th century. The north wall has original Norman windows, with narrow lancet openings and wide, deep splays, and there is also a blocked 12th-century doorway. The 2 west windows are Perpendicular, probably from the 15th century.

One of the first things you notice on approaching the church is a lovely table tomb in Cotswold 'woolsack' style to the east of the porch. This type of tomb is common in the Cotswolds and is a reminder that much of the region's wealth came from the wool trade.

Nearby, set into the chancel wall, is a blocked 12th century priest's door, into which is set a stone lintel protecting a pair of 18th century metal plaques to Elizabeth Bicknell (d. 1745) and her husband Thomas (d. 1750). To the left of the porch entrance is a peculiar sundial with a stone gnomon (the bit that casts the shadow). 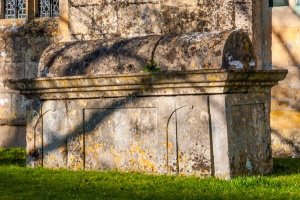 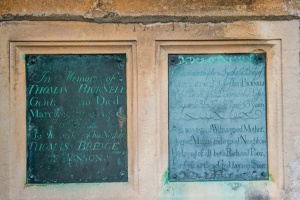 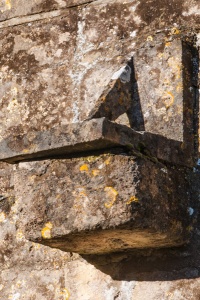 Stone sundial on the porch

The Civil War casts a long shadow in this area, and there is a sobering reminder of the war at Yanworth. Against the east wall of the north transept (around the back of the church) are a series of large pock-mark holes in the wall.

These are said to have been made by Civil War musket fire. A local story suggests that 6 Royalist soldiers escaped from the Battle of Stow-on-the-Wold in March 1646. They were killed and buried at Yanworth in a mass grave, in unconsecrated ground within the churchyard. No one knows the site of the supposed grave. 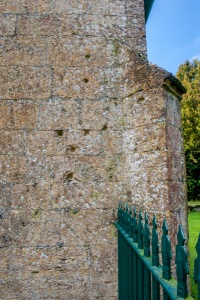 Inside the church, the first thing you see is the wonderful 12th-century font at the west end of the nave. This simple font is decorated with a rope pattern around the rim of the bowl. Interestingly, according to the church guide, the font originally did not have a stem; it was set on the floor to allow adults to stand and have baptismal water poured over them. 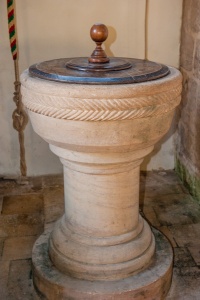 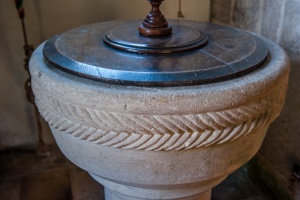 Norman decorative carving on the font

On either side of the tower arch, above the font, are a series of wall paintings. On the south side of the arch is a confusing jumble of paintings from 2 distinct periods. The most obvious feature is an early Elizabethan cross within a circle. More interesting - and easier to make out - is the painting on the north side of the arch. Here you can see a skeleton holding a scythe - a depiction of Father Time, who comes for us all. 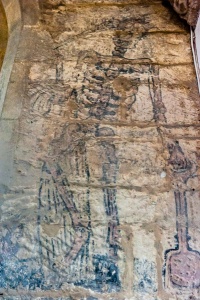 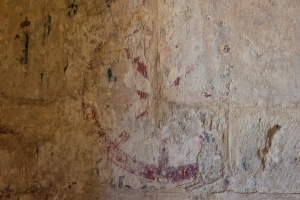 Set on a window sill in the south wall is a carved stone cross-head, found in the churchyard and brought inside for preservation.

The barrel-vaulted nave roof is 19th century, but it is carried on lovely stone corbels of medieval date. These show human heads with a variety of fascinating expressions. Even more expressive is a wonderful carved head on the north transept arch, depicting a woman with her hair drawn back under a headdress.

Near this wonderful carving is a squint allowing a view of the altar from the transept. On the other side of the 12th-century chancel arch, almost hidden by a 19th-century wooden screen, is a deeply incised cross cut into the stone. 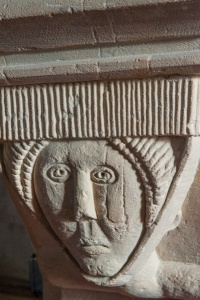 Yanworth's church is a delight, located in a spectacularly beautiful area of the Cotswolds. The church is usually open daylight hours. If you fancy a walk, do what our family did and stroll down the valley and up to Stowell Park, where the 12th-century church beside the manor house has a fabulous 12th-century Doom wall painting. A mile away in the direction of Chedworth stand the remains of a Roman villa (National Trust). 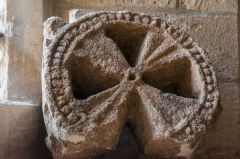 More self catering near Yanworth

More bed and breakfasts near Yanworth