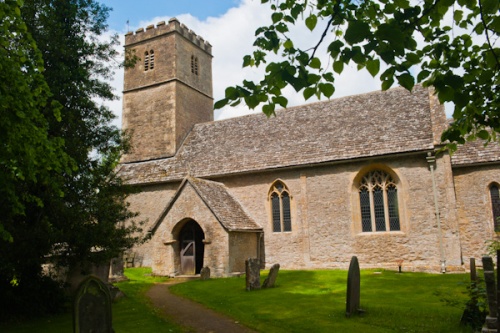 The Saxon church of Andrews stands on low ground close to the quiet River Coln, in the heart of the eastern Cotswolds surrounded by pretty Cotswold stone cottages.

There was a settlement here in Saxon times, as the church attests, but the name of the village was then Coln on the Hills, not too surprising when you consider that much of the village lies on a sloping hillside above the Coln. After the Norman Conquest Coln was held by Odo, Bishop of Bayeux, half-brother of William the Conqueror. When Odo fell from favour the king held the manor himself, until 1082. 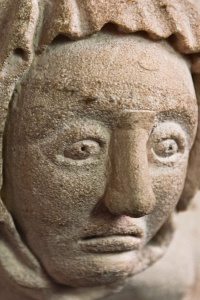 In 1105 a Norman knight named Roger of Gloster (Gloucester) suffered serious injuries in the battle at Falaise (sometimes reported as 'Walyeson'). Roger must have feared for his soul, for he gave the manor of Coln on the Hills to Gloucester Abbey.

As a result, the village became known as Coln Rogers. The abbey kept sheep here in the medieval period. Gloucester Abbey retained ownership of Coln Rogers until the Dissolution in 1541, after which it was held by the Dean and Chapter of Gloucester Cathedral.

It is rare to find a Saxon church with an unaltered layout, but that is what we have at Coln Rogers. The church of St Andrew dates to the mid 11th century and exhibits every element of traditional Saxon architecture; the ground plan is original, with long-and-short work construction binding the walls, narrow pilaster strips for decoration, with a narrow a Saxon window and chancel arch. The east end of the chancel was rebuilt in the late Middle Ages and the west tower added.

The construction is limestone rubble dressed with ashlar. The church is very simple in layout, with a nave and chancel, with a south porch and west tower added later. The north door is Saxon, though much altered in Norman and Early English style.

Another obvious Saxon feature is a pilaster strip which occurs inside and outside the building. A narrow Saxon lancet is set in the north wall of the chancel. This is carved from a single block of stone, as many Saxon windows are. The south doorway is Norman or perhaps 13th century.

The interior is perhaps less interesting than the exterior and suffers a bit from over-enthusiastic renovation. The font is Norman, probably 12th century, but much remodelled. One interesting feature is a 15th century Perpendicular pulpit, one of very few stone fonts in Gloucestershire churches. This pulpit is extraordinarily well-preserved; at first glance, the carving is so clean and crisp you might take it for Victorian.

Look under the pointed base of the pulpit and you will find an amusing small carving of a head. At the east end of the nave is a very large oak chest, formed from a hollowed-out tree trunk. 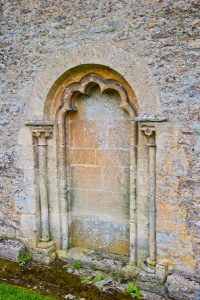 There are some small pieces of medieval stained glass, including a very nice figure of St Margaret in a north nave window. In the north wall of the chancel is a small 13th-century tomb recess, which the church guidebook rather optimistically suggests might have been an Easter Sepulchre.

Coln Rogers is a 'Thankful Village', that is, one of those few villages in Britain which did not lose a single soldier in World War One. Only 52 villages in Britan can share that thankful statistic.

St Andrews is a wonderful ancient church, in an idyllic village setting. Come here as I did on a sunny summer's day, and it is hard to imagine a more perfect example of what makes visiting the Cotswolds so enjoyable.

For a very nice walk, simply stroll west along the lane to Coln St Dennis and visit the lovely Norman Church of St James the Great. The countryside is fabulous, and on a sunny day it is hard to imagine a more picturesque and peaceful place. 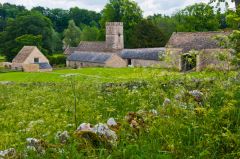 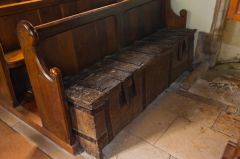 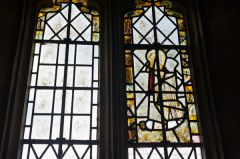 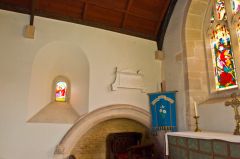 More self catering near Coln Rogers