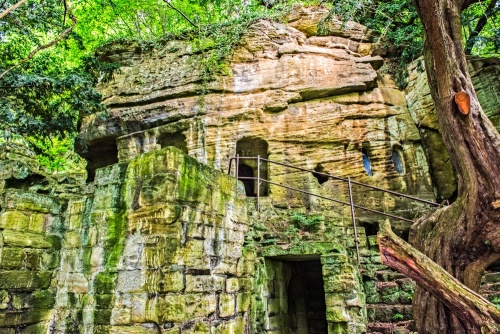 Downstream and on the opposite bank of the River Coquet from Warkworth Castle is a medieval hermitage carved out of solid rock. The Hermitage was created by the Earls of Northumberland, who hired a priest to live in the cave-like dwelling and say prayers in the chapel hewn from the rock.

The first hermit recorded was Thomas Barker, who was appointed 'chaplain of the chantry in Sunderland park' for life in 1497 by the 4th Earl of Northumberland. The Earl paid Barker 66s 8d per year to celebrate mass in the Hermitage chapel.

It seems very likely, however, that there was a hermit in residence much earlier, perhaps as early as 1400, in the time of the 1st Earl.

Barker's annual stipend seems generous compared to that of his successor John Greene, who was paid only 10s per year.

Despite the name, The Hermitage was more accurately a chantry; a form of private chapel, and the 'hermit' was actually a priest hired by the Earl to say prayers for the souls of the Earl and his family. Contrast this to a traditional hermitage which is the retreat of a holy man or woman who seeks out a life of contemplation for their own spiritual welfare. 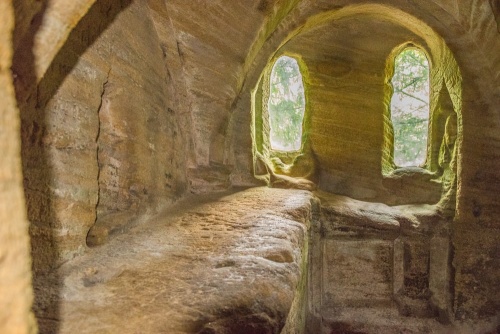 The first hermitage was laid out with a chapel, sacristy and porch, with living quarters for the hermit to the west.

The chapel chamber is composed of three vaulted bays carved directly into the rock face. At one end is an altar, also carved from the solid rock. This is thought to be the only altar in Northumberland not to be defaced during the religious turmoil of the Reformation in the 16th century.

In the window bay to the right of the altar is the highlight; a series of sculptures probably meant to depict the Nativity. The figures are almost life-sized, and though worn by erosion are still very striking (though a bit hard to see in the dim interior of the chapel). 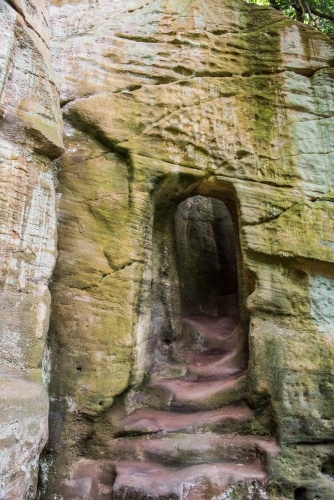 Stairs to the hermit's kitchen garden

Beyond the chapel is an inner chamber with viewing slits cut through the rock wall. These slits, or windows, allow anyone in the chamber to see what happens at the altar. It would seem likely that the Earl and his entourage would watch the priest's religious service from the inner chamber.

The duties of the hermit changed over time. By the late 15th century he was essentially a tenant farmer, with secular as well as religious duties. More comfortable accommodation was erected between the original hermitage and the river bank. By comparison to the rock-built chambers, these new quarters were almost luxurious, with a hall, kitchen and upper chamber. 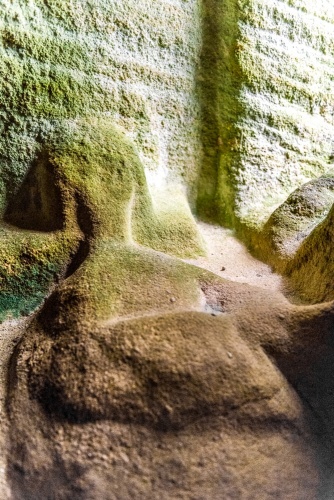 Figure of the Virgin Mary on the chapel window ledge

These 15th-century rooms now stand roofless, but are quite atmospheric and very easy to explore. The outer wall still stands to a height of 4m (13 feet), with remains of a chimney breast and a window opening. In the kitchen area you can see the remains of an oven.

To the right side of the chapel, a set of stone-cut steps lead up through a tunnel to an area on top of the cliff that was used by the hermit as a kitchen garden.

The Hermitage can only be reached by boat. You can get a ticket from the English Heritage counter at Warkworth Castle. You then have a half-mile walk along the footpath by the River Coquet to a landing stage. There an English Heritage staff member will row you to the far bank and allow time ashore to explore the Hermitage before rowing you back.

The Hermitage is only open on days when the river current is slow enough to allow a safe trip. It is always a good idea to check the English Heritage website for opening times but do be aware that weather conditions on the day may make the river impassable.

The Hermitage is well worth making a special effort to see. The atmosphere is amazing. You can't help but wonder what life would have been like for the early hermits.

Note that there is a separate admission charge for The Hermitage (though you can get a ticket for the Hermitage without buying a ticket to the castle). English Heritage members have free admission to both. 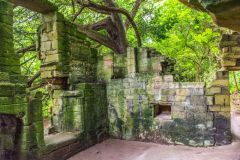 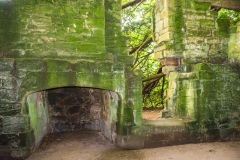 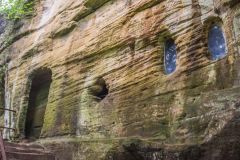 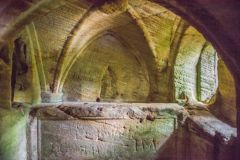 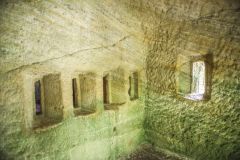