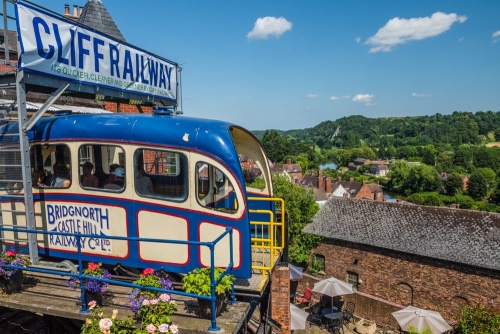 The Bridgnorth Cliff Railway is the oldest and steepest inland funicular railway in Britain (the East Hill Cliff Railway in Hastings is the steepest overall). The railway links Bridgnorth's High Town, where the castle stands, with Low Town, beside the River Severn.

It is unusual to find a cliff railway inland; most were built in seaside resorts during the late Victorian and Edwardian periods. The first opened in Scarborough in 1875.

Until 1891, High Town and Low Town were linked only by several flights of very steep steps, such as St Mary's Steps and Stoneway Steps. Construction began on the Cliff Railway in November 1891 and the railway was officially opened on 7 July 1892.

The railway was operated by the Bridgnorth Castle Hill Railway Company Ltd, under the leadership of Sir George Croydon Marks (who later became Lord Marks of Woolwich). The company is now operated by a descendant of Lord Marks.

The railway project was largely financed by Sir George Newnes, MP, who made his fortune in publishing and was also behind the Lynton & Lynmouth Cliff Railway. 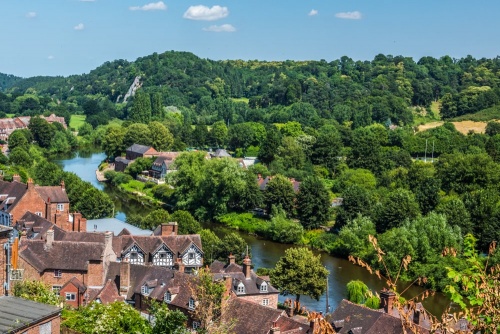 The view from the Top Station

When the top carriage reached the Bottom Station, water in its tank was pumped up to a holding tank in the Top Station.

In 1944 the water-powered system was replaced with the current electrically-operated system. In 1955 the heavy wooden carriages were replaced with much lighter carriages made of aluminium. These aluminium monocoque carriages are still in use today.

The winding gear is the same type that is commonly used in colliery operations, with winding drums at each end and three stepped gears to control the winding speed. There are three braking systems for safety.

The primary system uses brake shoes applied to 4' diameter drums, much like drum brakes on an automobile. The brakes are leased using compressed air acting on weights that lift the brake shoes away from the drums. Three steel safety cables act as emergency backups to the compressed air system.

The railway cars are driven manually from the top station. The driver must stand on a 'dead man's pedal' mounted on the floor in order to activate the motor.

The Cliff Railway operates every day, with the exceptions of Christmas, Boxing Day, and New Year's Day. 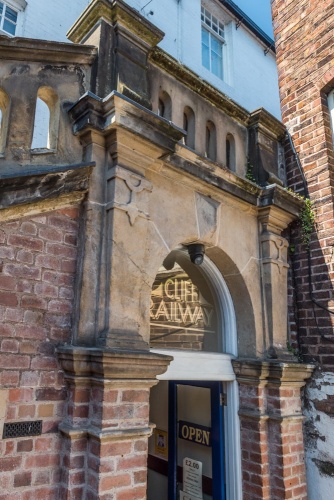 The Top Station is easy to find; it is at the end of Castle Terrace, reached via Bank Street, at the southern end of High Street. Alternatively, take the pedestrian footpath from the castle, leading past St Mary's Church. This approach offers wonderful views of Low Town and the River Severn.

Bottom Station is approached up an alley between 3-4 Underhill Street, opposite the western end of Bridgnorth Bridge by the traffic lights.

Our family has taken the Cliff Railway on several occasions. The journey is very short, but it certainly is easier than making your way up Cartway or one of the flights of steps to High Town! The admission fee on our last visit was just Â£2, good for a return journey.