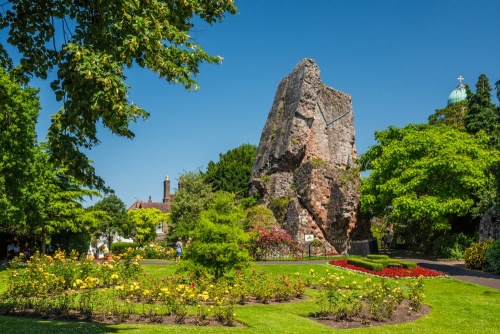 The remains of Bridgnorth Castle stand within a Victorian public garden atop high cliffs in Bridnorth's High Town, overlooking the River Severn.

The castle was begun in 1101 by Robert de Belleme, Earl of Shrewsbury, who abandoned his father's caste at Quatford in favour of this clifftop site. The castle may stand on the site of an earlier fortification erected by Ã?thelflÃ¦d of Mercia in AD 912. Alternatively, Ã?thelflÃ¦d stronghold may have stood on Panpudding Hill, to the south-west.

De Bellame's choice of the more easily defended site may have been prompted by his tensions with Henry I. De Belleme rebelled against the king the following year, and Henry marched on Bridgnorth at the head of an army.

He besieged the newly-built castle, whose defenders lasted three weeks before surrendering, and De Belleme was exiled to Normandy. 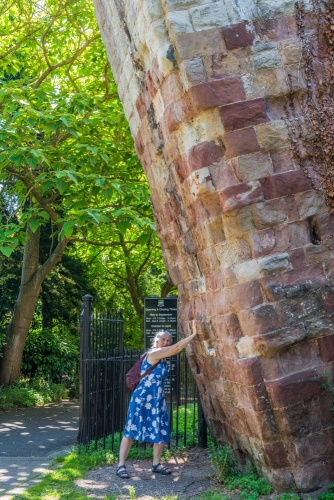 Holding up the castle's leaning tower?

Henry I strengthened the castle defences, and in 1137 he granted the castle to Hugh De Mortimer. In 1155 Mortimer refused to surrender the castle to Henry II, prompting a second siege. This had the same outcome as the first; the defenders held out briefly but were forced to surrender. After this point, Bridgnorth Castle remained in royal hands.

it was Henry II who added the square stone tower that is the castle's major remaining feature.

The castle was extended in the 12th century and again in the 13th century, when the outer bailey was made an official part of the surrounding town. Despite these efforts to strengthen the castle, it ceased to have military significance and was reported in a state of decay by 1281.

The castle was occupied briefly in 1321 by barons at odds with Edward II, but repairs were sporadic and in the 16th century the antiquarian John Leyland wrote that the castle wards 'now goe [sic] totally to ruin.' 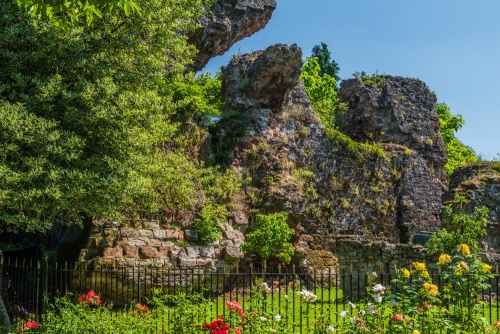 Ruins of the Great Tower

During the Civil War, Bridgnorth was firmly in the Royalist camp and the castle was garrisoned for the king. Oliver Cromwell's Parliamentarian army besieged the castle in 1646. The defenders held out for three weeks but were eventually forced to surrender.

Cromwell ordered the castle to be slighted to make it unusable for military purposes. In the wake of the Civil War destruction, stone was robbed to repair other buildings in the town.

A surviving postern gate was blown up in 1821 because it obstructed traffic.

The only major part of the castle still standing is a section of the Great Tower. The tower was so badly damaged in the Civil War that it leans at a remarkable 15 degrees, approximately four times the inclination of the famous Leaning Tower of Pisa. 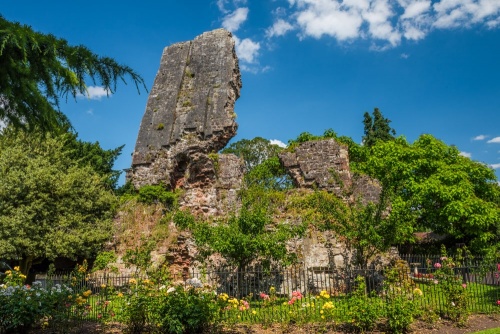 The Great Tower from the south

Not a lot remains of Bridgnorth Castle beyond the leaning Great Tower and large pieces of fallen masonry. The tower stands behind an iron railing, so you can't walk amidst the ruins. Immediately to the west are large fragments of masonry, all that remains of King's House, which held the castle hall. King's House was maintained as a royal residence until the 17th century.

If you examine the ruins of the Great Tower you can see the damage caused during the Civil War, when the castle was bombarded by Parliamentary forces from their base on Panpudding Hill, 250m away.

St Mary Magdalene's Church, just outside Castle Gardens to the northeast, began as the castle chapel. The building we see today dates from the late 18th century and was the first church designed by Thomas Telford. 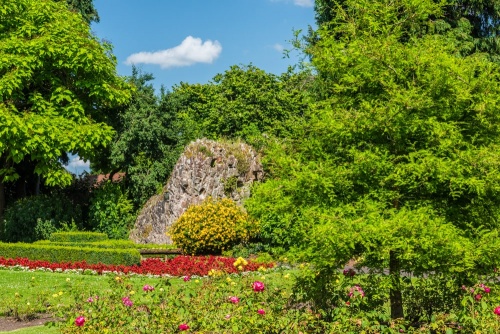 In 1897 a public park was laid out within the castle's inner bailey to mark Queen Victoria's Diamond Jubilee. Aside from the castle ruins, there are three major features inside Castle Gardens. 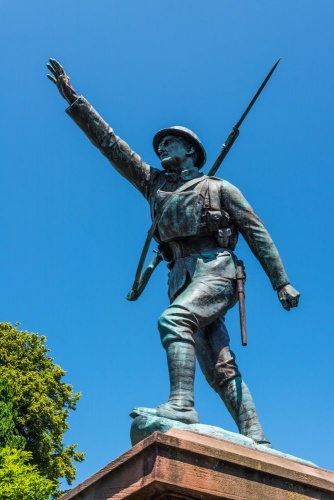 The first of these is a war memorial, listed Grade II for its heritage value. The memorial was designed by Captain Adrian Jones and erected in 1920. It consists of a large pedestal of red sandstone on a stepped base. atop the pedestal is a life-sized bronze figure of a soldier in battle dress. He is dressed in the uniform of the Shropshire Light Infantry and he is shown in the act of throwing a grenade.

Around the base are bronze plaques listing the names of local soldiers who died in the First and Second world wars. 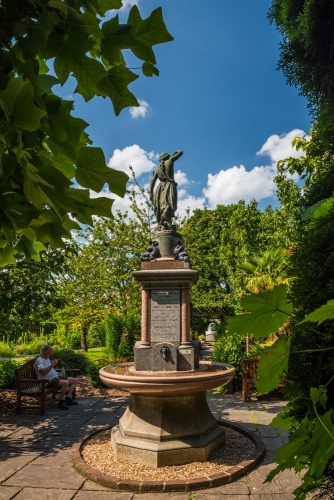 In the northeastern corner of the garden is a fountain erected in 1881 in memory of Henry Whitmore, MP for Bridgnorth from 1852-1870. The fountain is made from polished pink and grey granite and bronze, with an octagonal base with a fountain bowl on top. Above the bowl is a pedestal with corner columns. On the sides are bronze shields, lion masks, and a portrait bust of Whitmore.

The Grade II listed fountain is topped by a bronze figure of Sabrina, the anglicised form of the Romano-British name for the River Severn. The figure was sculpted by JM Griffiths.

The fountain was originally erected in West Castle Street but was later moved to this location in the castle grounds.

The third feature inside the Castle Gardens is a small bandstand. This is a replacement for the original Victorian bandstand, which was taken down in 1940 so that its metal parts could be melted down for the war effort. 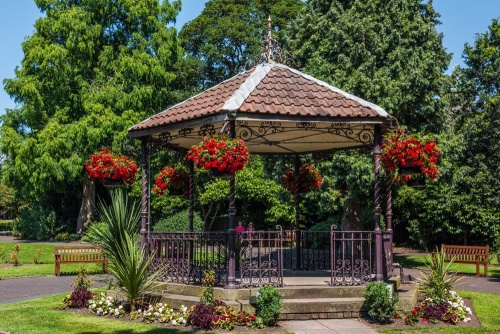 Bridgnorth Castle is easy to reach on foot from anywhere in High Town. It stands at the southern end of West Castle Street, but can also be accessed by way of a path that skirts St Mary Magdalene Church at the end of East Castle Street.

Castle Walk skirts the castle grounds and links to New Road and the pedestrian footbridge from Bridgnorth rail station. From New Road, take Cannon Steps to the castle gardens. From Underhill Street take the Library Steps. The castle is well signposted from every direction.

The castle and grounds are open to the public at any time.

More self catering near Bridgnorth Castle and Gardens

More bed and breakfasts near Bridgnorth Castle and Gardens