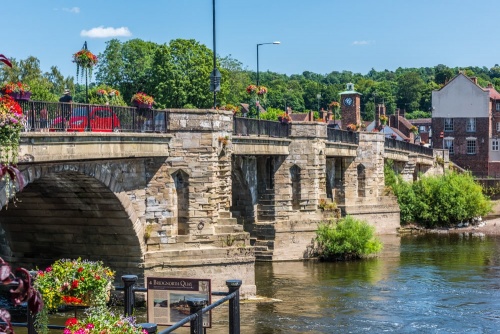 The Shropshire town of Bridgnorth grew up around a vital crossing of the River Severn, and for centuries Bridgnorth Bridge was the only major crossing point for many miles around.

It is likely that the first bridge in the area was at Quatford, to the south, but there may have been a bridge here in the time of AEthelflaed, the Lady of Mercia (AD 870-918).

It is possible that the 10th-century bridge was destroyed, as there was a bridge at Quatford later in that same century.

When Richard de Belleme established the borough of Bridgnorth 1101, he built (or rebuilt) the bridge here. This medieval bridge incorporated a chapel located over the second arch, dedicated to St Sythe (Osyth). 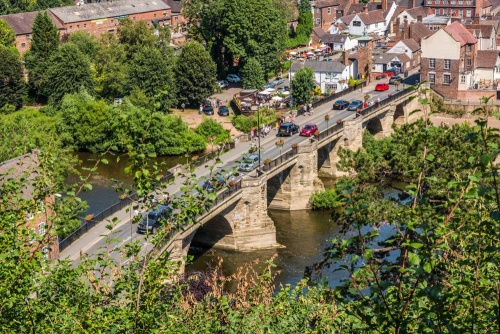 St Sythe was a Saxon saint who escaped drowning whilst crossing a footbridge. The chapel remained in regular use until 1538, but was later used by local Baptists.

There was also a gatehouse guarding the crossing, probably consisting of an archway with rooms above it, located on the east (Low Town) side. This was later used as a prison until it was torn down in 1801 because it obstructed traffic flow.

The earliest written record of a bridge dates to 1272 when a man of Broseley was murdered by a neighbour whilst crossing Bridgnorth Bridge.

Tolls were instituted in 1331 as a means of paying for bridge maintenance. A toll collector's house was erected on the east side of the bridge. This was pulled down in 1912. 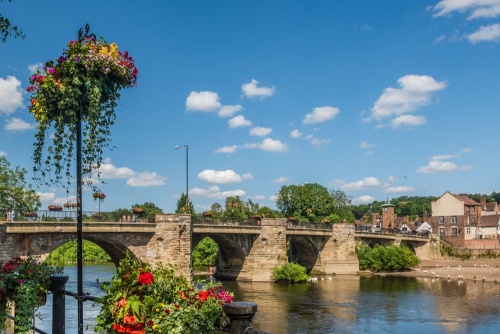 Severn Bridge from the western bank

The medieval bridge was largely rebuilt in 1795, then again from 1812-23 to a design by Thomas Telford, the county surveyor. It is Telford's bridge that we see today, though it likely incorporates stonework from the medieval bridge.

There is a wide pedestrian promenade on the western bank (the High Town side), where you can get excellent views of the bridge. There is also an information panel giving details of the bridge's history and the story of Bridgnorth Quay, the hub of transportation between Welshpool and Gloucester until the arrival of the Severn Valley Railway in 1862.

Severn Bridge is listed as Grade II by Historic England for its heritage value.

Severn Bridge is at the junction of Underhill Street, Bridge Street, and Riverside. It is almost exactly opposite the entrance to the Bridgnorth Cliff Railway and the lower end of Cartway.