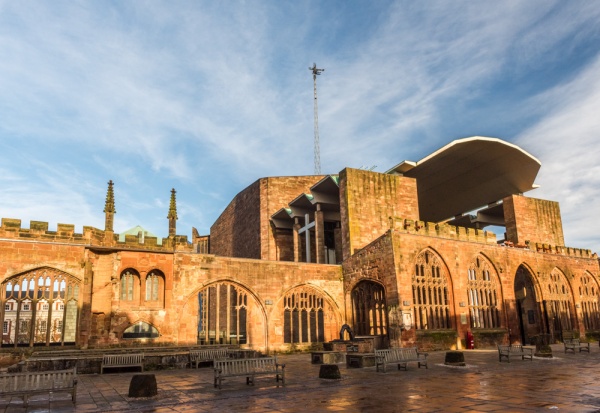 There is not one Coventry Cathedral, but two, standing side by side, and together they tell so much about this historic city and its heritage.

In fact, there have been three cathedrals in Coventry, but to trace the origins of the very first we have to go back to the early 11th century.

In 1016 Cnut, then bidding to become king of England, led his band of Danish warriors deep into the heartland of England. His men sacked a Saxon nunnery at Coventry, said to have been established around the year 700 by St Osburga.

A few decades later Earl Leofric and his wife Godiva, or Godgifu, founded a Benedictine monastery on the site of the earlier nunnery, dedicated to St Mary. In 1102 Bishop Robert de Limesey gained Papal approval to move his see to Coventry, and he used the existing priory church of St Mary as his cathedral. A new church was begun, suitable to act as a cathedral, and this was completed by the middle of the 13th century. 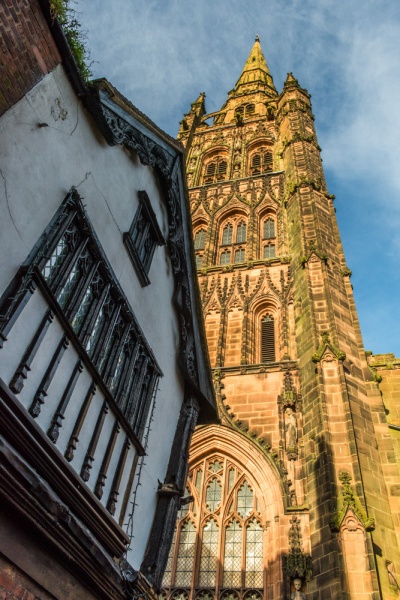 Unfortunately, the fact that St Mary's was also a monastic church meant that it fell foul of Henry VIII's efforts to suppress the monasteries. In 1539 the monastery was dissolved and the buildings either used for other purposes or pulled down and the stone used as building materials.

For the next 379 years, Coventry had no cathedral, but changing patterns of population settlement meant that a major reorganisation of Church of England diocese structure was inevitable, and in 1918 the Diocese of Coventry was created. But what to use as the cathedral, since the original cathedral building had been destroyed by Henry VIII? The answer was to use St Michael's parish church, which stood just a few yards from the site of St Mary's Priory.

St Michael's was begun in the late 14th century and though it was considerably smaller than the original cathedral building it was still one of the largest parish churches in England. 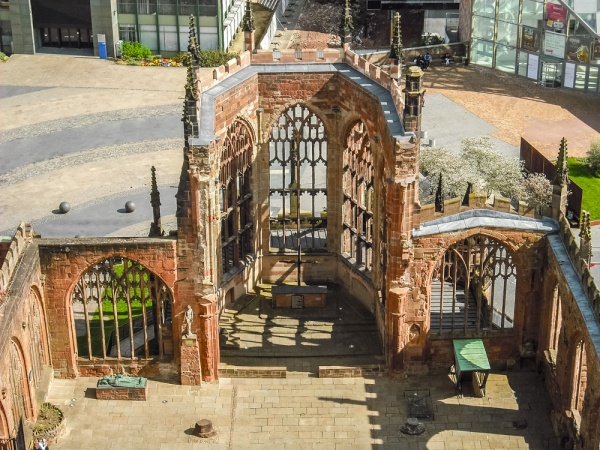 The medieval cathedral ruins from atop the tower

This second of Coventry's cathedrals was destroyed on 14 November 1940, when the German Luftwaffe raided the historic city centre of Coventry. The raid levelled most of the city centre and devastated the cathedral building. Despite the destruction, the west tower of the cathedral miraculously survived, relatively intact. Immediately after the bombing raid, the decision was made to build a new cathedral, leaving the shell of the medieval building to serve as a reminder of the futility and waste of war.

In the aftermath of the bombing the Provost of Coventry Cathedral, Richard Howard, made a fateful decision, one that still echoes today. He decided that rather than simply build the new cathedral as a focus for Anglican worship, the new cathedral would be at the heart of a movement for peace and reconciliation between all people, of all faiths.

On Christmas Day 1940 Provost Howard made a radio broadcast, offering a vision that when the war was over he would work to build 'a kinder, more Christ-child-like world', with the new cathedral acting as a Centre for Reconciliation. As you explore the cathedral you find numerous sculptures emphasising the focus on reconciliation and building bridges between people of all faiths and backgrounds. 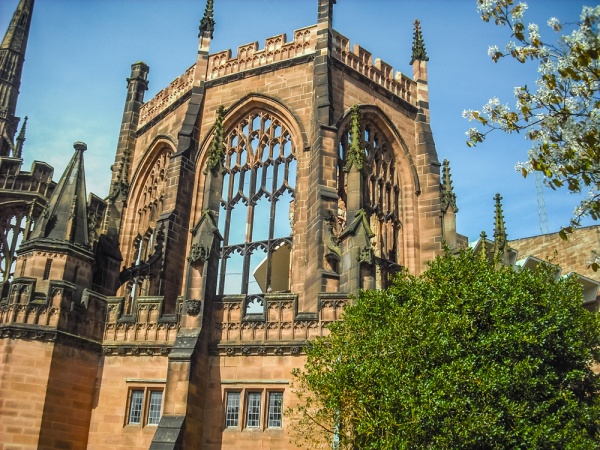 Beside the ruins of the medieval cathedral is the third building to act as Coventry Cathedral; a striking modern building designed by Sir Basil Spence, with the help of some of the leading artists and architects of the day. Rather than a purely Church of England sacred space, Coventry's new cathedral was intended from the beginning as a space where people of all denominations and all faiths could gather together.

Spence, who was later knighted for his work, was clear from the start that the old cathedral should be retained, to act as a garden of remembrance, and should be linked to the new structure to essentially create one large church with both an indoor space for worship and an outdoor space for contemplation.

The new cathedral was consecrated in 1962 and the opening ceremony was the first performance of Benjamin Britten's War Requiem. The modern design caused comment at first, but was quickly embraced by the public as a symbol of reconciliation and peace. One of the interior highlights is a huge tapestry of Christ, thought to be the largest tapestry in the world.

On the exterior wall is a sculpture by Jacob Epstein showing 'St Michael's Victory over the Devil', and another Epstein sculpture graces the ruinous medieval cathedral.

The old cathedral is dotted with sculpture emphasising the theme of reconciliation. One sculpture is known as The Charred Cross; a pair of crossed, blackened beams atop an altar made of rubble.

The Charred Cross story is typical of the whole ethos of Coventry Cathedral; in the aftermath of the WWII bombing the cathedral stonemason, Jock Forbes, was surveying the devastation when he noticed a pair of burned wooden beams lying across each other in the shape of a cross. He tied them together, forming a symbolic cross that is now preserved on the stairs between the new cathedral and St Michael's Hall. A replica stands within the old cathedral. 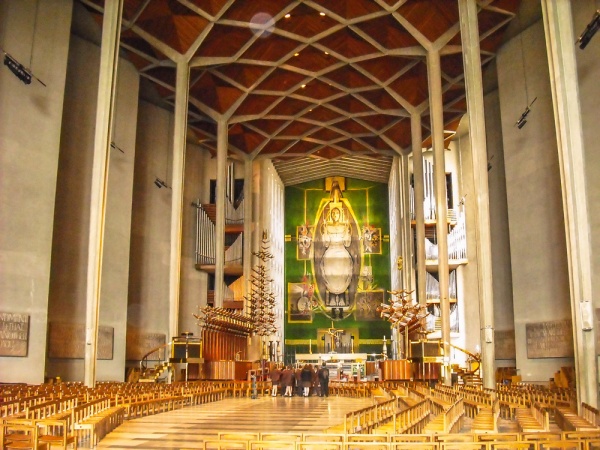 Inside the new cathedral

Exploring Coventry Cathedral is both historically interesting and intensely moving. The old cathedral is open to visitors daily, free of charge, though there is a fee for climbing the cathedral tower. There is also a charge for visiting the new cathedral. 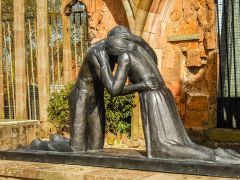 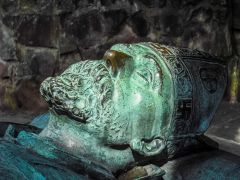 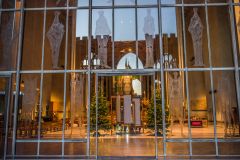 More self catering near Coventry Cathedral