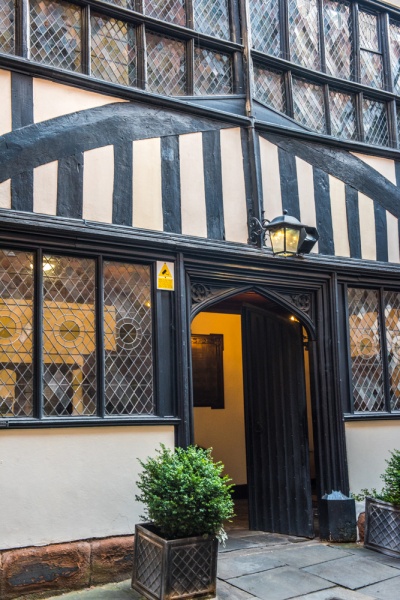 Opposite the ruins of Coventry's medieval cathedral stands another medieval treasure, St Mary's Guildhall, one of the best surviving medieval guildhalls in Britain. The exterior of the Guildhall, facing onto Bayley Lane, is deceptive; you see a large set of traceried windows above two rows of arched windows. Set in the centre of the ground floor is a low, arched opening leading to a hidden courtyard. Save for a piece of modern sculpture in the courtyard the view has remained unaltered for over 5 centuries.

The Guildhall was begun around 1340 on the site of a 12th-century castle erected by the Earl of Chester. It was intended as a meeting place for the guilds of St Mary and Holy Trinity, which included amongst their members the leading merchants of medieval Coventry. Over time the leading city guilds joined together and used the Guildhall for the administrative base and venue for ceremonial functions like official banquets and mystery plays.

Shortly after it was built the Guildhall began to be used as a Council House for civic administration. Coventry's first mayor, John Ward, took office here in 1349. An annual ceremony known as the 'mayor making' continued to be held in the Guildhall until 2002. 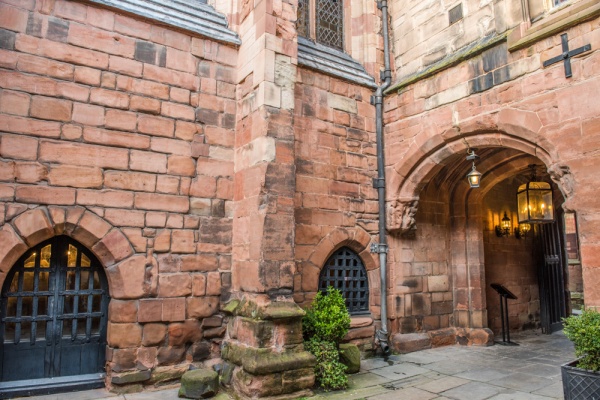 The Guildhall was used to entertain visiting dignitaries, including Henry V, Henry VI, and Henry VII. One member of the Guild is better known for his links to London; Dick Whittington, who served as Lord Mayor of London three times and whose adventures are recounted in the popular children's rhyme.

During the Wars of the Roses Henry VI and Queen Margaret of Anjou sought refuge in Coventry, and St Mary's Guildhall was used to entertain the royal couple and their court.

Guilds were abolished during the reign of Edward VI, and from that point on the Guildhall was used solely by the civic council. Most of the daily civic administration was eventually moved to the nearby Council House in the early 20th century, and many of the medieval Guildhall rooms were rented out to tenants.

In 1569 Elizabeth ordered Mary, Queen of Scots to be moved from her imprisonment at Tutbury Castle in Staffordshire, to confinement in Coventry following a Catholic uprising in the north of England. The letter from Elizabeth I to the people of Coventry is on display in the Guildhall.

Mary seems to have been held at several locations in Coventry, including the city's largest inn, and the Guildhall. A small chamber in 'Caesar's Tower' is known as Mary, Queen of Scots Room, but it seems much more likely that she would have been kept in what is now called the Draper's Room, formerly the Old Mayoress's Parlour. 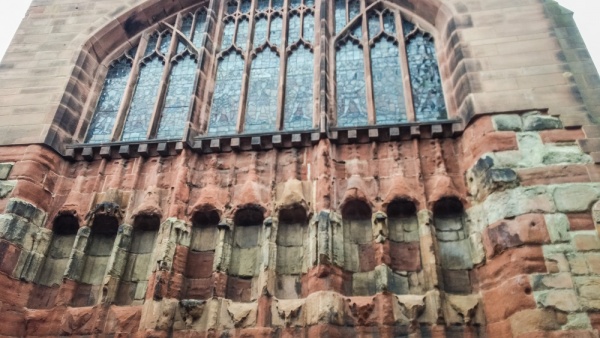 Aside from council administration the Guildhall also served as a venue for plays and other types of entertainment. William Shakespeare almost certainly performed at the Guildhall on several occasions as an actor. A later famous performer was actress Sarah Siddons, who performed several times in the late 18th and early 19th centuries.

The great hall is thought to have inspired the 'grand old hall' in George Elliot's first novel, Adam Bede. Eliot, whose real name was Mary Ann Evans, worshipped at nearby Holy Trinity church and would have known the Guildhall.

During the English Civil War, the Guildhall served as an armoury, and during the 19th century a soup kitchen operated to help weavers left destitute by a collapse in the textile industry. In one famous episode John Wesley, the religious reformer, asked permission to preach in the Guildhall when a thunderstorm threatened to ruin his outdoor sermon. The Mayor refused him permission on the grounds that the hall was already booked for a dancing master's class.

Though the neighbouring cathedral was destroyed in the bombing raid of 14 November 1940, the Guildhall miraculously survived. It is still used for important civic ceremonies and is regularly rented out for private functions such as weddings. There is a cafe in the vaulted undercroft, and the main hall is open to the public from spring through autumn.

The medieval kitchens survive and are still used to prepare food for functions, though with the aid of modern equipment. 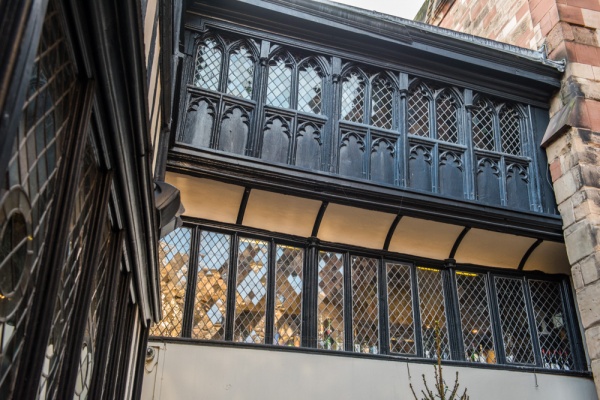 The timber-framed first floor from the courtyard

The historic highlight of a visit to the guildhall is the Coventry Tapestry, made around 1495. The tapestry was specially made for the Guildhall and hangs in its original position over 500 years after it was installed. The tapestry measures some nine metres across and three metres high and completely fills the north wall of the great hall. It is a superb piece of late medieval craft, a testament to the skill of the Flemish weavers of Coventry.

The tapestry depicts a royal gathering, with members of Henry VI's royal court, apostles, angels, and saints, surrounding a figure of the Virgin Mary. It is replete with symbolism and hidden meaning, some of which are still not decoded.

The Tapestry was part of Henry VII's veneration for Henry VI. The first Tudor king tried to create a cult of Henry VI and have the king declared a saint, enhancing his own claims to the throne in the process.

One of the figures depicted is Richard III, who is shown with a coin in his right hand; the symbol of treachery. In his other hand Richard bore a snake, another symbol of duplicity. The snake was later removed, but you can see its outline. The message is clear; Richard is being cast as a villain, perhaps responsible for the death of the saintly Henry VI. By portraying Richard as a villain, Henry VII is asserting his own right to the throne.

The ceiling of the great hall boasts a marvellous collection of carved and painted angel bosses. Some of the angels are modern replica's, installed after the WWII bombing, but others are carefully restored originals.

Aside from the great hall and tapestry, other historic chambers on view include the Prince's Chamber, with beautifully carved wooden panelling, and the Old Council Chamber, with a magnificent frieze incorporating the Coventry coat of arms.

The Guildhall is usually open to visitors from spring through autumn, and at other times depending on whether or not there are events booked in the hall. The cafe in the undercroft is open regular business hours. 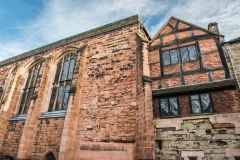