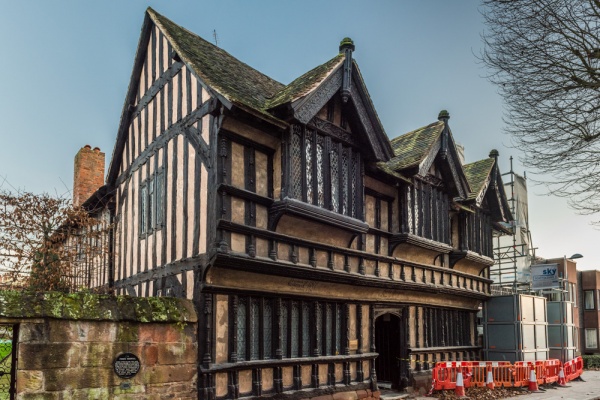 Tucked away on a quiet side street off New Union Street is one of Coventry's historic treasures, an early 16th-century timber-framed almshouse known as Ford's Hospital. The Hospital is generally considered one of the finest examples of 16th-century domestic architecture in England. When Shakespeare's Globe Theatre in London was reconstructed in the late 20th century historians studied the doorways of Ford's Hospital to understand building techniques of the time.

'Hospital' in this case has a different meaning to our modern concept of a place for healing illness and injury. Think of Ford's Hospital as the equivalent of subsidised housing for elderly people.

The Hospital has been known by several names over its long history, including Greyfriars Hospital, The Bede House, and Pisford's Hospital.

The almshouse, or hospital, was founded in 1509 by William Ford to provide housing for five elderly men and one woman. In addition, funds were provided for a priest who was to live in the Hospital and use the adjoining chapel. Ford was a wealthy wool merchant and former Mayor of Coventry. 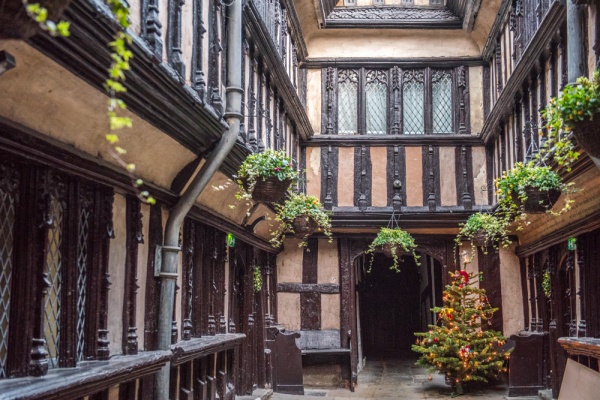 You can see the date 1529 on the wall, but this is not the date the almshouse was built but the date that feoffees were appointed to administer the Hospital. After 1800 it became a home for elderly women only. 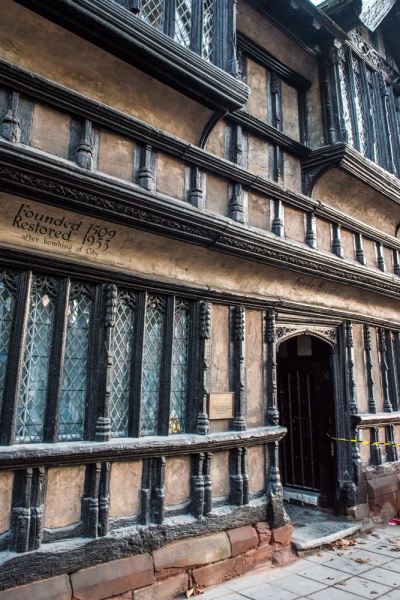 The almshouse is built with a jettied frontage facing Greyfriars Lane. The first floor projects well out over the ground floor, and three timber-framed gables project even further. In the centre of the ground floor, a doorway leads down a narrow passage to a gate that gives access to a wonderfully picturesque courtyard. The only real concession to the passage of time in the courtyard are rainwater heads and downpipes. The heads date to 1784.

Like so many historic buildings in central Coventry Ford's Hospital was damaged by bombs during WWII. On 14 October 1940, the building was struck by a bomb which killed six residents, a nurse, and the Hospital warden. Though the building sustained damage, it was not beyond repair. The restoration took 13 years and used original timber and brick salvaged from the bombed-out site. The Hospital was altered to create large, fully self-contained apartments. 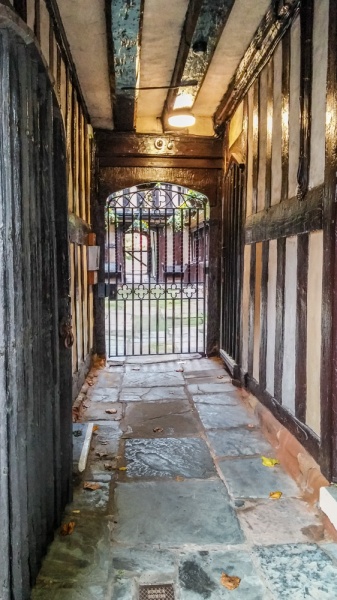 The passage to the inner courtyard

Amidst the bombing rubble a section of 14th century tiled floor was unearthed. One floor tile showed a black eagle, symbol of Earl Leofric of Mercia who did so much to make Coventry a major mercantile town in the 11th century. The symbol suggests that a chapel associated with Greyfriars Priory (see our article on Christchurch Spire) stood on the site before Ford's Hospital was erected.

Ford's Hospital, along with several other historic buildings in Coventry, featured in a 2009 episode of Doctor Who, entitled The Shakespeare Code.

Since the Hospital is in use as a residence the interior is only open to the public for the annual Heritage Open Days event in September. However, you can easily view the exterior facing Greyfriars Street, with the beautifully carved 16th century timbers. You can also peep through the barred gate into the incredibly picturesque inner courtyard. Unfortunately a stone wall surrounds the property and blocks views of the gardens and the rear of the building. 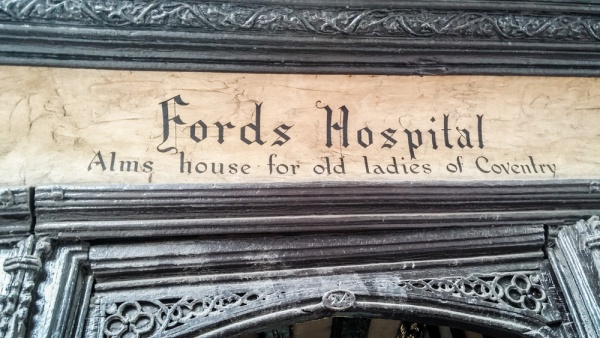 The inscription over the doorway