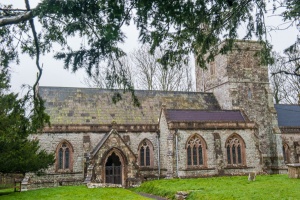 There was a Saxon chapel at Kingston, and in 1099 a chapel dedicated to St Andrew was located here, associated with the Hundred of Mere and owned by the Earl of Cornwall. The font from the Saxon church was discovered buried in the churchyard and is now at the west end of the nave.

Much of the present church is a Victorian rebuilding of 1847 though the tower is 14th century. The restoration was paid for by Harriet, Marchioness of Bath.

The most interesting historic feature inside the church is a 14th-century wooden statue of the Madonna and Child. The statue is almost certainly Flemish and may have come from the cathedral at Mechelen. It was probably brought to the UK by a soldier fighting in the Hundred Years War. Also Flemish is the nicely carved pulpit, and there is 16th century Flemish stained glass in the west window.

A very worn stone effigy lies in the chancel. The effigy is the subject of some controversy, though, as some people think it may be a modern copy of a medieval effigy. It was discovered under the church during the 1847 restoration. The style of costumes suggests a date sometime during the reign of Henry III (1216-1272). Who it represents is unknown, but it may be a member of the Vernon family, who had the living of Kingston Deverill in the 13th century, perhaps Sir Robert Vernon, who served as Sheriff of Wiltshire in 1268. 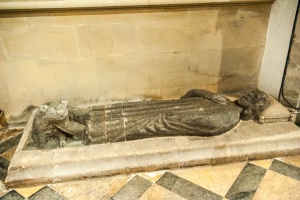 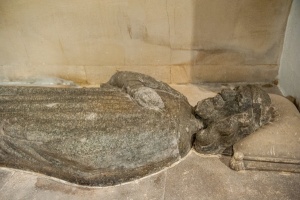 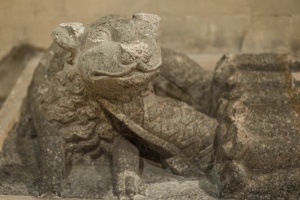 Carving of a dog

In front of the altar (indeed, it is almost hidden under the altar) is a stone slab inscribed with the names of rectors of Kingston Deverill, dating to Ino Cockerell, who was appointed in 1302.

One interesting historical footnote speaks volumes about medieval life. According to local legend, a pair of churchwardens were brought to trial in 1636 by the Court of Star Chamber, accused of allowing football to be played on the Sabbath.

On the wall of the south chapel is a brass plaque to Eleanor Hurle, who died in 1688 and left a gift of £50, with interest to be distributed to the poor of the parish every year at Christmastide. The money is still being distributed today.

Other interesting highlights include Jacobean coffin stools, and a late 17th-century priest's chair brought here from the redundant church in Monkton Deverill.

Perhaps striking an odd note is a modern banner depicting Alfred the Great, bearing his sword aloft and holding a scroll. Alfred is reputed to have paused in the Deverills to pray before making battle with the Danes at Edington in 878AD. 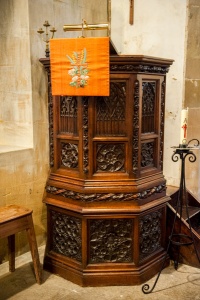 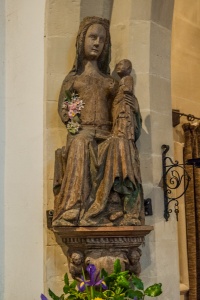 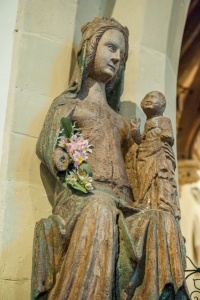 Another view of the
Madonna and Child 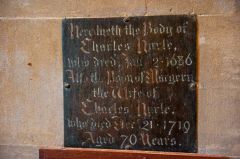 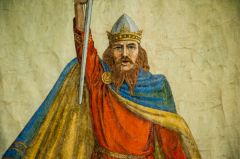 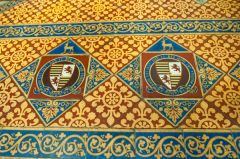 More self catering near Kingston Deverill