HERITAGE HIGHLIGHTS:   The first statue of Wallace to be erected in Scotland 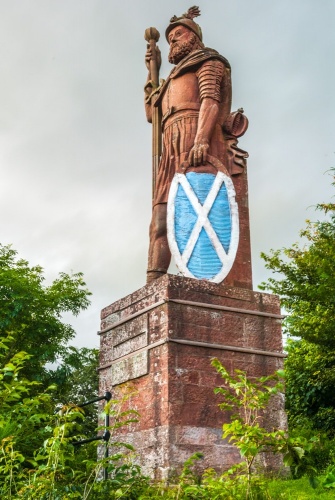 On a hill overlooking the River Tweed near Melrose is a striking statue of William Wallace (perhaps equally well known to modern readers as 'Braveheart'). The statue, erected in 1814, is just a few hundred yards from the ruins of historic Dryburgh Abbey and a very short distance from Scott's View, a popular viewpoint named for its links to author Sir Walter Scott, who is buried at Dryburgh.

William Wallace is regarded as one of Scotland's great heroes, a commoner who took on the might of Edward I's England in a bid to win Scottish independence. Though his bid ultimately failed after he was betrayed to his enemies, his cause was later taken up by Robert Bruce, who did eventually win Scotland freedom from England.

The statue of Wallace was the first to be erected in Scotland and is based on a portrait of Wallace found in France. The sculpture was commissioned by David Stewart Erskine, the 11th Earl of Buchan and executed by Mr John Smith of Darnick, a self-taught sculptor, who worked from the portrait.

The statue is gigantic; much larger than life-sized. It stands 21.5 feet high and stands atop a pedestal 9.5 feet high, for a total height of 31 feet. The piece is carved from red sandstone and was originally painted white, though the paint has long since worn away, leaving the plain sandstone. It shows Wallace clad in medieval Scottish armour, with a shield hanging from his left arm while he leans upon a sword with his right.

When we visited, the shield had been recently painted with a white border and St Andrew's Cross against a pale blue background, which did look rather odd considering the remainder of the statue was plain, unpainted sandstone. 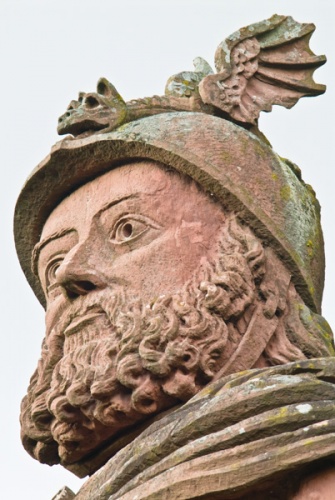 In front of the statue is an urn with a faded inscription. It is difficult to read the carved words today, but we know from government records that the inscription was:

Sacred to the memory of Wallace

The peerless Knight of Ellerslie
Who wav'd on Ayr's Romantic shore
The beamy torch of Liberty
And roaming round from Sea to Sea
From Glade obscure of gloomy Rock
His bold companions call'd to free
The Realm from Edward's Iron Yoke.

The pedestal that supports the statue has a dedication plaque reading:

Note:
Do not confuse this statue in the Borders with the Wallace Memorial near Stirling!

Finding the Wallace Statue is relatively straightforward. From Dryburgh take the B6356 which splits in two a few hundred yards from the abbey. Turn left and follow the road, signposted towards Scott's View.

When you're done seeing the statue and enjoying the views towards Melrose and the Eildon Hills I suggest going further along the same road to Scott's View.

About William Wallace Statue
Address: B6356, Dryburgh, Borders, Scotland
Attraction Type: Historic Building - Landmark
Location: There is a parking area on the B6356 just north of Dryburgh. A minute walk through woodland brings you to the statue. The closest postcode from satnavs is TD6 9DP
Location map
OS: NT592327
Photo Credit: David Ross and Britain Express