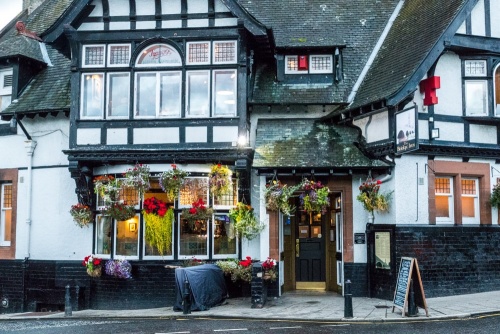 Peebles is a picture-perfect town in the River Tweed, set in spectacular surroundings amidst a beautiful landscape full of historic interest. The River Tweed is known for its superb salmon fishing, and Peebles is no exception. The town motto reminds us of the area's connection to the river, 'Against the stream they multiply'.

The scenic riverside setting has attracted artists and writers alike over the years. Perhaps the most famous is John Buchan, one of the most famous Scottish authors of modern times. Buchan is best known for his thriller, 'The Thirty Nine Steps', but he had a long political career, rising to serve as Governor General of Canada. Buchan's story is told at the John Buchan Story on Peebles High Street.

Another writer to call Peebles home was William Chambers, author of the original Chambers dictionary and co-founder of the Edinburgh publishing firm W&R Chambers.

The origin of the name Peebles is open to debate but it may have evolved from the Cumbric term 'pebyl' meaning a place where tents are pitched. 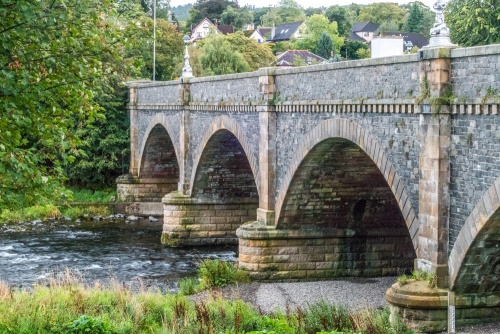 Peebles was made a royal burgh by David I in 1152. The burgh's importance was cemented when King William the Lion decreed that the chief courts of justice had to be held annually in either Edinburgh or Peebles.

Edward I of England is known to have visited Peebles on two occasions; in 1301 and again in 1306. One of Edward's actions was to appoint a new sheriff after the incumbent joined William Wallace in his rebellion against the English.

That was just the beginning of a long series of royal visits. James III of Scotland came on numerous occasions. Perhaps surprisingly given its proximity to the English border, Peebles generally escaped major damage in the interminable conflict between England and Scotland that caused such devastation elsewhere in the Borders.

The town did, however, take the full force of an English assault in 1549 and was burned to the ground. A century later in 1650 Oliver Cromwell's soldiers occupied Peebles.

Things did not improve in the 18th century as the Industrial Revolution was slow in coming to Peebles. As a result, the town stagnated and times were so hard that the council had to buy food supplies for the residents on three occasions. Things changed when the railway arrived in 1855, bringing increased trade and industry to Peebles. The railway line closed in 1962.

The town's role as a regional market town brought prosperity and helped create the picturesque architecture that is most evident along High Street. The town's market heritage is not just a thing of the past; Peebles has been named as the Top Independent Retailing Town in Scotland (and number two in the UK as a whole) for its wide range of independent shops and tourist amenities. 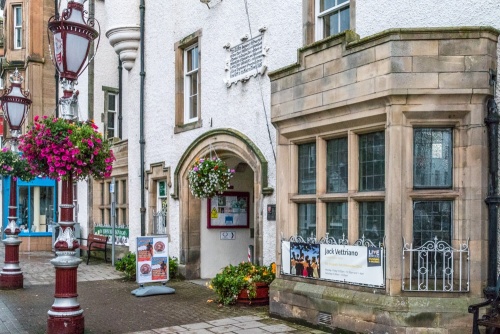 On the High Street is a complex of historic buildings known as the Chambers Institution, given to the people of Peebles in 1857 by William Chambers of dictionary fame. The gallery features exhibits of contemporary art, mostly by local artists, while the museum tells the story of Peebles over the centuries.

In the Secret Room you can see the ornate plasterwork friezes commissioned by William Chambers during building restoration. One of the friezes is a 16-metre long copy of the Elgin Marbles. In the courtyard is a superb war memorial.

The Chambers Institution is much more than just a setting for the museum and gallery; it is a historic building in its own right and one of the oldest buildings in Peebles. It was built in the 16th century as a residence for the local Dean. It was later owned by the Douglas family of Queensberry, giving the building its common name of the Queensberry Lodging.

The Lodging was the birthplace of the 4th Duke of Queensberry, a notorious London rake known as 'Old Q'. One of Old Q's descendants was the 8th Duke, who drew up the 'Queensberry Rules of Boxing' which form the basis of modern boxing rules still in use today.

The Chambers Institution served for a time as the civic centre and the town council met here before modern offices were built in 1975.

Sometime around 1296, a Trinitarian priory was funded in Peebles under the patronage of King Alexander III. The priory was raised monastery status in 1474. The monastery was destroyed by the English in 1549 and finally abandoned in 1561. The monastic church was used as the parish church of Peebles until the present Old Kirk was built in 1784.

The most impressive part of the ruins is the 15th century west tower, standing 50 feet high. Near the monastery are the ruins of the 12th-century church of St Andrew, which served as the parish church before it was destroyed in the English attack. Cross Kirk stands in a lovely area of wooded parkland a short stroll from the High Street. 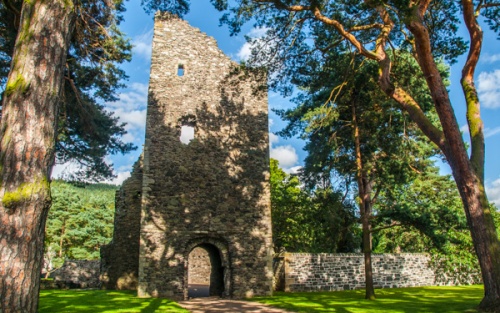 One of the most striking historic attractions in Peebles is the medieval bridge across the River Tweed. The exact date when the bridge was constructed isn't clear, but records show that bridgework was done in 1465, though whether that was simply repairing an older bridge or building a new one isn't known. So it would seem that there has been a stone bridge here since at least the middle of the 15th century.

The 15th-century bridge was rebuilt in 1663 using stone from St Andrew's Church, which had been destroyed by the English in 1549. The original bridge was just eight feet wide. This was widened to 21 feet in 1834 and again to 40 feet in 1897. The Tweed Bridge now carries the B7062.

At the end of High Street stands the Old Parish Church, built in 1885 to replace an earlier building on the same site erected in 1784. That building, in turn, was built to replace Cross Kirk, as mentioned above. The 19th-century church was designed by architect William Young of London and cost an estimated £9,500. It is a prominent local landmark due to its striking clock tower in Gothic Revival style.

A few miles west of Peebles sits historic Neidpath Castle, occupying a high bluff overlooking the river Tweed. The castle dates to the 14th century, though it was 'modernised' two hundred years later. Look for the grim pit prison and the huge fireplaces - large enough to roast a whole ox. Special exhibits tell the story of Mary, Queen of Scots and her visit to Neidpath in 1563. Mary's son James VI stayed here in 1587. 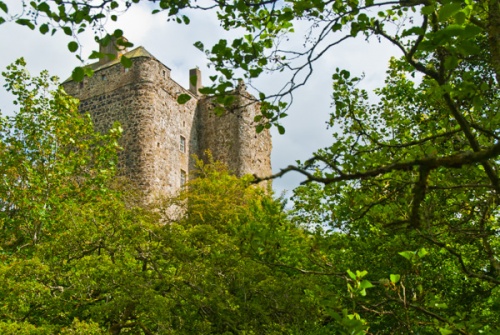 Six miles south-east of Peebles stands Traquair, perhaps the oldest continuously inhabited house in Scotland. Traquair dates to sometime before 1107 and was for many years a royal hunting lodge. It has been in the Stewart family since 1491. Mary, Queen of Scots visited Traquair in 1566 and you can see the cradle she used to rock her son, the future James VI.

You can also see a secret chapel where Lady Seaton held Catholic mass at a time when that religion was repressed. Traquair is one of the great historic houses of Scotland.

Peebles is known for its annual Beltane Festival, held in June. The festival is a week-long celebration with a mix of modern and traditional events including the crowning of a Beltane queen and a procession through the streets of the town led by the Cornet. There is also a Highland Games every September featuring Highland dancing, a pipe band contest, and traditional sporting competitions. 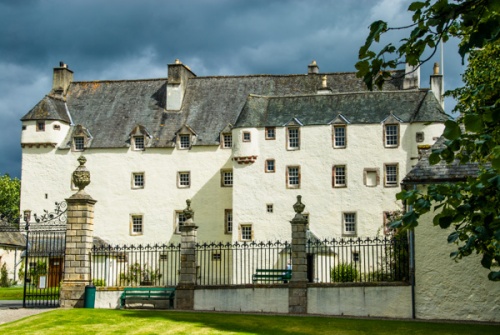 I can't recommend Peebles highly enough. Our family have visited twice and can't wait to return. The town's setting in the Tweed Valley is simply superb and Peebles is without a doubt one of the most picturesque and historic towns in the south of Scotland.

About Peebles
Address: A72, Peebles, Borders, Scotland
Attraction Type: Town
Location: At the junction of the A72 and A703 about five miles west of Innerleithen.
Website: Peebles
Location map
OS: NT257404
Photo Credit: David Ross and Britain Express

More self catering near Peebles

More bed and breakfasts near Peebles

Self Catering near Peebles