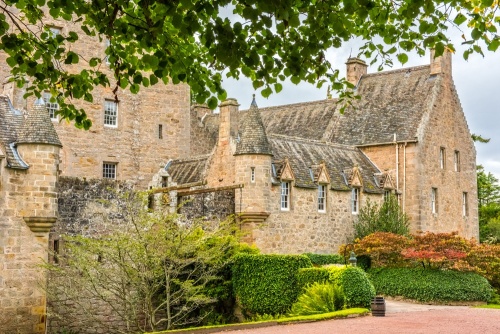 Thane of Cawdor is the title promised by Shakespeare's witches to Macbeth, and legend makes Cawdor Castle the place where Duncan was murdered. The central tower of the castle, set amongst beautiful Highland scenery, is a 14th-century keep to which 17th-century wings have been added.

The name Cawdor immediately conjures up images of Shakespeare's play Macbeth, but Cawdor was a thanedom in the 11th century, long before the Bard of Avon dramatised - and completely altered - the history of Scotland for his play.

The original fort of Old Cawdor stood about 1 mile north of the current castle, and it is quite possible that the real Macbeth was familiar with the original castle of Cawdor. Macbeth's successor, Malcolm Canmore, granted lands at Cawdor to Hugh de Kaledouer, in gratitude for Hugh's help in restoring Malcolm's family to the throne. The king wanted a loyal presence to help control the untamed Highland clans.

The castle dates to the 14th century, but it has been strengthened several times by the Scottish crown since then. In 1454 James II granted the Thane of Cawdor permission to crenellate a tower (to fortify it and add battlements) on condition that he be allowed to come and go without hindrance. According to legend, the Thane decided where to build his new tower based on a dream. 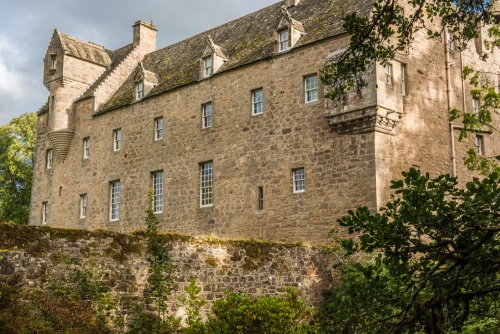 The castle from the bridge over Cawdor Burn

Acting on his dream, he loaded a donkey with gold and let it roam freely around the countryside until it stopped to rest under a tree. Taking this as a sign, the thane built his tower around the living tree.

Perhaps, but consider; in the tower's vaulted guard room is a living thorn tree, growing out of the earthen floor, still alive after more than 500 years. It is an amazing sight to see the tree growing up inside the dimly lit vaulted chamber. 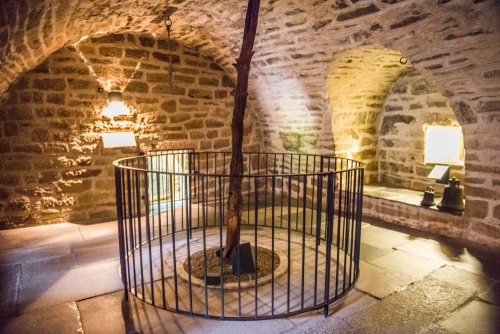 The living thorn tree in the guard room

The Thane of Cawdor might have been better advised to choose the site for his castle without the aide of donkeys, however, for the low-lying site offered few military advantages.

To compensate, the castle was surrounded by a wide moat and built with walls so thick that the castle pit prison is built within the wall itself.

One of the most impressive defensive features was not original to Cawdor, however; it is a massive iron yett, or hinged gate, brought here from Lochindorb Castle after the Thane sacked that castle in 1455.

In 1499 the heiress to Cawdor was an infant named Muriel. The child was made a ward of the Campbell Earl of Argyll, but when Argyll's troops came to carry off the child her mother took drastic action. She pressed a red-hot key to the child's skin and bit off the tip of her fingers so that she could always be identified. Muriel was later married to Sir John Campbell, which gave rise to a local tradition that the Campbells will always hold Cawdor if a red-haired woman lives on the shore of Loch Awe.

But all was not plain sailing for the Thanes of Cawdor, for in the 18th century they chose to follow Bonnie Prince Charlie and the Jacobite cause.

After the Jacobite Rising of 1745 ended in defeat at Culloden, the family thought it prudent to live on their Welsh estates. And that proved to be a blessing, for it meant that Cawdor was spared Victorian 'improvements', and remains today a fascinating combination of an authentic medieval castle and a comfortable Jacobean house. 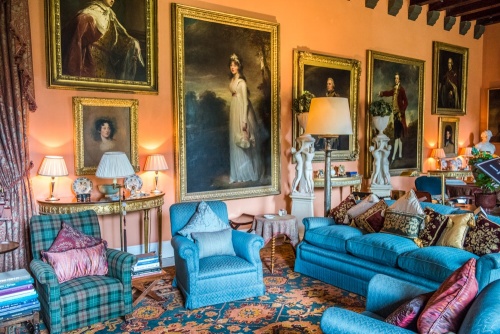 Like most houses of any age in Scotland, Cawdor is haunted. Well, naturally! In this case, there are 3 known ghosts. One is a mysterious lady in blue. The second is the ghost of Sir John Campbell.

The third is a tragic young woman who fell in love with a young man who did not measure up to her father's expectations. The enraged father cut off the poor girl's hands to ensure that she kept her distance from her unsuitable love. And in case you're wondering, no, there's never been a sighting of Macbeth's ghost, or indeed, of three witches.

The main focus of the house is the 15th-century tower, which was originally entered by an external stair to a first-floor doorway. The doorway was later converted into a window, then blocked completely. The basement of the tower is used as a storage area and is reached only by a stair set into the thickness of the wall. A passage leads to the pit prison, which was originally only accessible by a trapdoor in the floor above.

The tower is connected on the south and south-east to a pair of 19th-century ranges built to match the architecture of the medieval structure. In the east wall, a drawbridge allows visitors to cross the dry moat outside the walls. To the north and west of the tower are three-storey high 16th century ranges, rebuilt for Sir Hugh Campbell in the late 17th century. These ranges have vaulted lower chambers and crow-stepped gables and attic stairs above.

The centrepiece at Cawdor is the Drawing Room, created from the original Great Hall, still featuring a musicians gallery at one end. This chamber still has its original fireplace and chimneypiece.

On the first floor, directly above the Drawing Room, is the Tapestry Bedroom, a bedchamber hung with Flemish tapestries made in 1682. These area style known as 'Arras Hangings' and are woven from a mix of wool and silk. They were made specifically to fit this chamber and depict Biblical stories including Moses leading his people across the Red Sea. The Castle account books show that the tapestries cost 483 pounds plus 3 pounds customs duties. 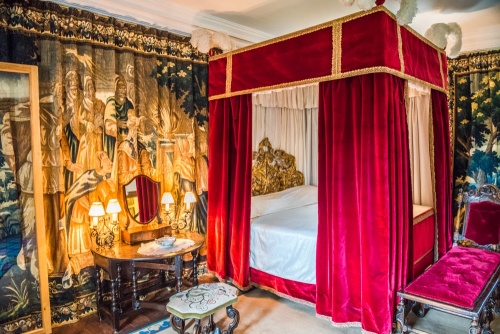 Here you will find the four-poster marriage bed made for Sir Hugh Campbell and Lady Henrietta Stuart, who were married at nearby Darnaway Castle in 1662. The bed features a richly decorated gilded headboard from Venice.

In the Yellow Room is a Bronze Age funeral beaker discovered during ploughing. Look for a painting by Keeley Halswelle entitled Birnam Wood. It was painted to honour the famous actor Sir Henry Irving, who visited Cawdor in 1887 with his leading lady Dame Ellen Terry to soak up the atmosphere for an upcoming production of Macbeth.

Then there is the Woodcock Room, created in the 1670s and later divided into a pair of 'Young Ladies Bedrooms'. The centrepiece here is a superb four-poster bed made by Sheraton as Lady Caroline Campbell's 1789 marriage bed. Lady Caroline's portrait hangs over the fireplace. The room takes its name from a painting of a gamebird over the central door.

Even more ornate is the Pink Bedroom, with not one, but two four-poster beds, this time by Chippendale. On the wall are tapestries depicting the story of Don Quixote, woven around 1680. The story continues with more tapestries in the family dining room.

Another highlight is the Dining Room, with an ornate chimneypiece created for the marriage of Sir John Campbell and Muriel Calder in 1510. Then there is the old kitchen, with a well cut right through solid rock. 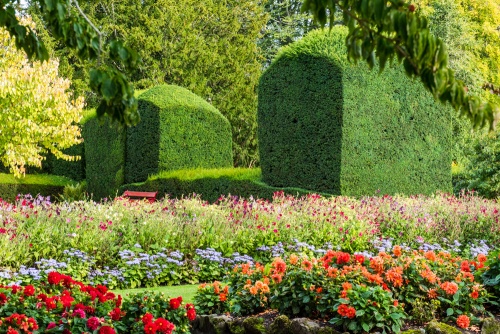 The Flower Garden The Gardens

Cawdor Castle is set in wonderful gardens, divided into distinct and very different parts. What is fascinating is that each of the three distinct gardens has its own unique history. in addition, there is a large area of woodland directly behind the castle, known as the Big Wood. This woodland is all that remains of an ancient Caledonian pinewood and boasts some marvellous old trees, with nature trails winding through them.

South of the castle is the Flower Garden, which was laid out around 1710 by Sir Archibald Campbell, brother of the then Thane of Cawdor. Though his brother held the title, Sir Archibald actually managed the Campbell estates across Scotland. He had studied in France and was influenced by the gardens he saw there to create the formal layout of the gardens at Cawdor.

Though much has changed since Sir Archibald's time, the clipped yew hedges have survived as have several of the fruit trees he planted. The 18th-century design was enclosed by lavender borders in 1850, designed by Lady Cawdor. She also added the long herbaceous borders which ensure colour well into the autumn.

This is the oldest garden at Cawdor and may date to the 16th century and perhaps earlier. There may have been an orchard here originally but by the late 17th century it had been planted with a profusion of exotic plants. The section nearest the castle has been developed as a hedge maze inspired by the Minotaur's Labyrinth at Knossos in Crete. At the centre of the maze is a modern sculpture depicting the Minotaur.

Laburnum arches surround the maze on three sides, creating a cascade of colour through the height of summer. Other sections of the garden include a Knot Garden planted with aromatic herbs, and a hidden 'Paradise Garden' protected by high yew hedges.

Between the castle and Cawdor Burn is this semi-hidden garden, reached through a doorway in the Flower Garden wall. This delightful, informal area provides a stark contrast with the formality of the Walled Garden and Flower Garden. Here you will find profuse plantings of primulas, rhododendrons, and azaleas along with spring daffodils, bamboo clusters, and willow trees. Amongst these familiar species are rare plants native to Tibet. The Wild Garden leads into the Big Wood; 750 acres of mature trees dissected by meandering trails. 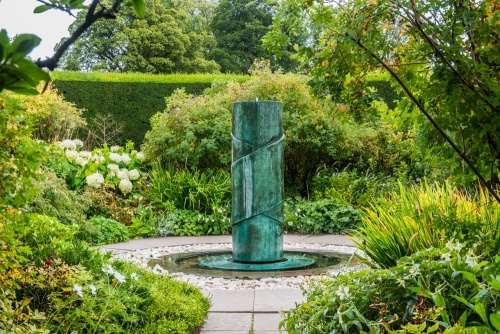 Curiously, Cawdor has been strongly linked to the immensely popular Outlander TV series, even though the castle was not used as a location during filming. Though it may not feature directly in the series, it is an excellent example of the type of clan castle referenced in the book that inspired the series. For that reason Cawdor is often a destination for Outlander-themed coach tours of the Scottish Highlands.

We visited Cawdor on a dreadful, wet day in April, after battling the elements at Fort George. Goodness, it was dismal! But the castle was a delight. Even wandering around the very soggy gardens after visiting the house was a wonderful experience. What really sticks in my mind was the amazing sight of that living tree growing out of the earth in the castle cellar. It really brings home just what a rich and eventful history the castle has had.

UPDATE
We finally had a chance for a return visit to Cawdor Castle and unlike our first visit, there wasn't a raindrop in sight. That certainly made it much more pleasant to explore the gardens and enjoy views of the castle from the grounds. And what a romantic sight it is! Cawdor is what foreign visitors fondly image all Scottish castle to be like, and the sense of history is pervasive.

I highly recommend a visit to Cawdor Castle; it is a wonderfully atmospheric castle and well worth a special trip to see. 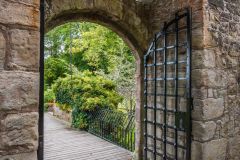 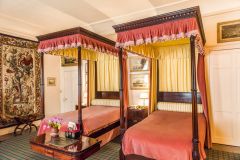 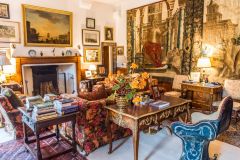 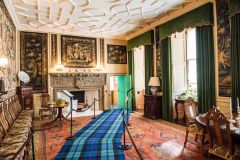 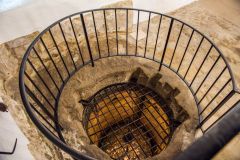 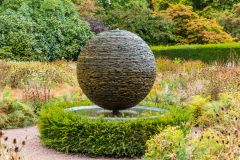 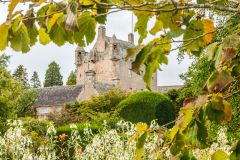 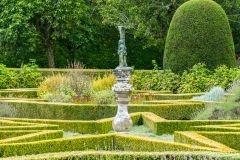 Nearby accommodation is calculated 'as the crow flies' from Cawdor Castle. 'Nearest' may involve a long drive up and down glens or, if you are near the coast, may include a ferry ride! Please check the property map to make sure the location is right for you.

More self catering near Cawdor Castle >> 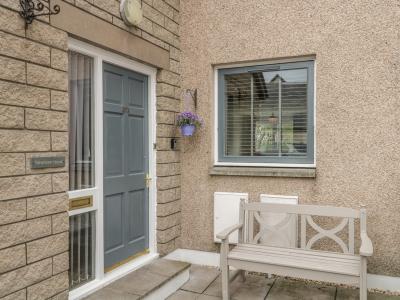 This delightful four-storey cottage rests in the centre of Nairn, Scottish Highlands and can sleep eight people in four bedrooms.
Sleeps 7 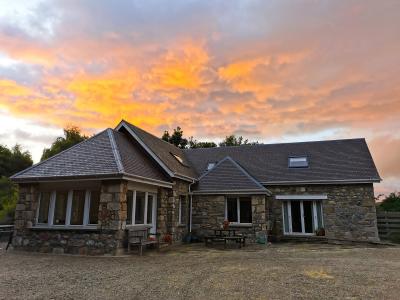 This detached cottage rests in Redburn near Nairn and can sleep six people in three bedrooms.
Sleeps 6