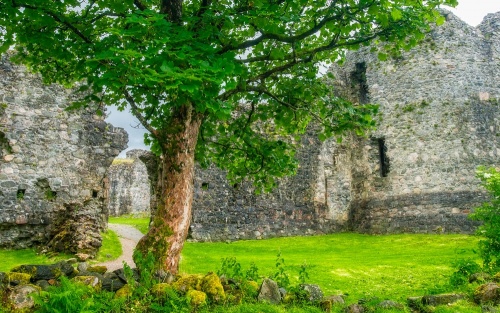 Inverlochy Castle is a ruined medieval fortress on the banks of the River Lochy about a mile north east of Fort William. One of Scotland's earliest stone castles, the 13th-century fortress was built by the powerful Comyn family. The castle is in the form of a square with round towers at the corners.

Inverlochy Castle was built where the River Lochy empties into Loch Linnhe around 1280 by the 'Red' Comyns, lords of Lorn and Badenoch. The location was perfect to control the western end of the Great Glen; a counterpart of Inverness Castle at the eastern end of the glen.

The Comyns built a quadrangular fortress with a curtain wall over 3 metres thick, with a round tower at each corner. A wide moat protected three sides of the site, leaving the fourth side to be defended by the river itself. There were two entrances at opposite ends, protected by barbicans.

Though empty now, the inner courtyard was originally crowded with timber buildings, providing stables and workshops. Residences were in the corner towers, and the large northwest tower housed the Comyn lords. The Comyn Tower stands three storeys high, with a storage area in the basement and the lord's private quarters above. 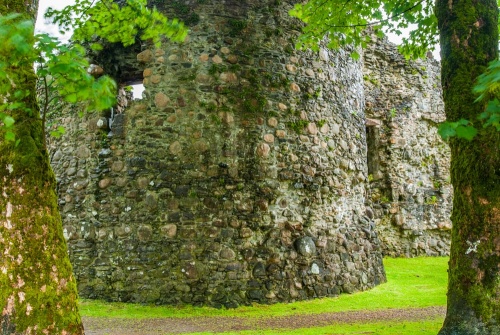 Ruins of the barbican tower

This tower is one of the highlights of Inverlochy; it still stands to its full height. Indeed, one of the surprising features of the castle as a whole is that it has been so little altered over the centuries. Perhaps it lost military importance before it could undergo the inevitable transformation of changing styles. In any case, Inverlochy is one of the most complete 13th-century castles in Scotland.

The 'Red' branch of the Comyn dynasty controlled vast swaths of northern Scotland and maintained castles at Ruthven and Lochindorb. The 'Black' Comyn lords held the earldom of Buchan, with their major castle at Balvenie.

The Comyns were close allies of the Balliols, a loyalty that would eventually bring disaster when the Balliols fought with Robert Bruce for the right to rule. In 1306 John Comyn was murdered by Bruce at Dumfries. When Bruce became king he made it a priority to destroy Comyn power in the north. Bruce's armies defeated the Comyns at Inverurie in 1308 and Inverlochy fell into the king's hands.

What happened to the castle then is not clear, for despite the fact that the Comyn Tower still stands to the parapet level, and the structure of the castle has hardly changed at all over 7 centuries, Inverlochy is a ruin, and trees grow within the rubble of the crumbling walls. It is an incredibly romantic place, with shady trees leading to the river bank. But it was not always peaceful here.

The Battles of Inverlochy

In 1431 a royal army under the Earl of Mar occupied Inverlochy shortly before meeting a force of Highland clansmen under Alexander Macdonald, Lord of the Isles. The Highlanders were victorious, and the royal army was put to flight. 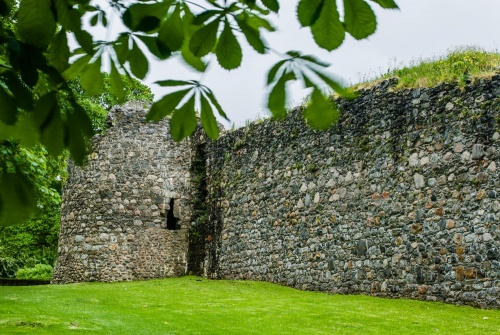 The curtain wall and corner tower

Then in 1645, the Marquis of Montrose led another royal army to attack an army of Covenanters led by the Earl of Argyll. Montrose surprised the Covenanters by leading his men on a surprise march over Ben Nevis to attack and defeat Argyll's force.

A decade later it was the turn of Oliver Cromwell's English troops; they built an artillery fort just south of the medieval castle, next to the River Nevis. From those humble beginnings developed the modern town of Fort William.

The castle is in a partly ruinous state, though the location beside the river is lovely. The castle site can be reached off the main A82 road north from Fort William towards Spean Bridge, just before the junction with the A830 (the Road to the Isles). The Great Glen Way trail passes within metres of the site. The site is accessible at any time - and hopefully, you'll have better weather when you visit than we did! 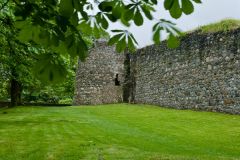 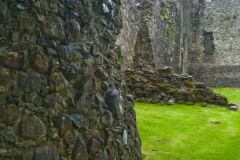 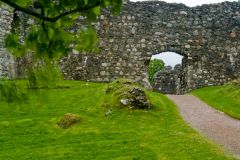 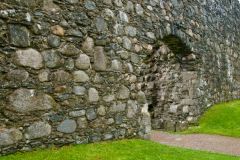 Nearby accommodation is calculated 'as the crow flies' from Old Inverlochy Castle. 'Nearest' may involve a long drive up and down glens or, if you are near the coast, may include a ferry ride! Please check the property map to make sure the location is right for you. 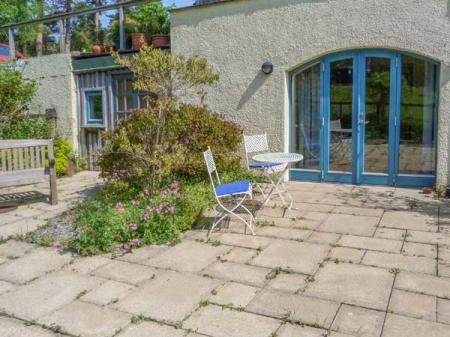 This is a pretty little gem of a ground floor cottage forming part of the owner's house in Torlundy near Fort William, yet is totally private and can sleep two …
Sleeps 2

This detached cottage rests near Fort William and can sleep 11 people in 6 bedrooms.
Sleeps 10