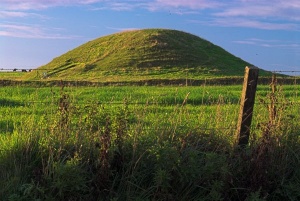 Orkney is blessed with a huge number of ancient monuments that can loosely be classified as chambered cairns and chambered tombs. Those designations give some clue as to the nature of these sites; they are ancient tombs built around and over one or more inner chambers.

Although we are left to guess at exactly how these cairns were used, it seems quite plausible that the corpses of the deceased were left outside the tomb until they had been picked clean by animals, then the bones were laid to rest in a chamber. It also seems likely that subsequent generations removed the oldest bones to make space for new 'arrivals'.

Some cairns are basically round, like a cone of earth over an inner burial chamber, while others are more elongated, like a cigar in shape, with an earthen mound covering a series of inner chambers or sections.

A simple graphic or two may help to show the different shapes you might see.

An example of this type of construction would be Maes Howe. If you were able to peel the earthen mound away and peer inside the cairn above, you'd see something like this:

Here you can see that the cairn is divided into several rooms, or chambers, accessible from a central chamber. Often these smaller chambers had very low entrances, between 18 inches to 3 feet high.

An alternative construction is more elongated, consisting of a central passage with upright slabs creating divisions along the passage, like this:

An example of this type of plan would be Midhowe on Rousay.

Sometimes there is a second level, or underground chamber beneath the ground floor, though this type of cairn is less common.

Please see our gazetteer of these and other types of ancient sites on Orkney.