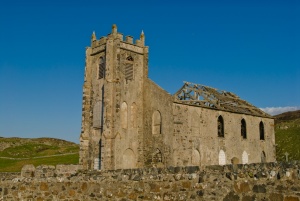 On the high cliffs overlooking Machir Bay, in the Rinns of north-west Islay, stands the small community of Kilchoman. The area around Kilchoman is secluded, even by Islay standards. Until the Kilchoman Distillery was founded at Rockside Farm this area was rarely visited by tourists.

The name Kilchoman tells a lot about its history; Kilchoman translates as Coman's church. The Celtic saint Coman, or Comman, established a chapel here on the Rinns in the 6th century. There were several Coman's active in western Scotland. We do not know exactly which one founded the chapel here but it may have been the same Coman known to have been active on Iona at the same period.

There are no obvious remains of Coman's original chapel, but we do know that a medieval church stood on the same spot. That church was probably built in the 13th century and served a large population in northwestern Islay, with dependent chapels at Nereabolis, Kilnave, and Kilchiaran.

Then in 1824 the medieval church was declared unsafe for worship. The entire building was pulled down and a new church in Gothic style built in its stead. It is this 'new' church, opened in 1827, which is now known as Kilchoman Old Parish Church. 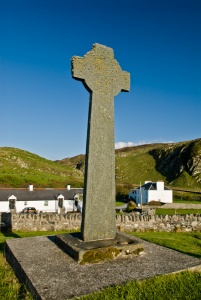 The church was built at a period when the population of Islay was at least 4 times what it is today. Over the course of the 19th century the combination of clearances and emigration left Islay with a fraction of the population it once enjoyed. The 1827 church served an increasingly scattered parish until 1977 when it was declared redundant, and worship was transferred to the church at Port Charlotte.

The old church now stands roofless, its ground floor doors and windows blocked up. The roof still lies where it fell in the church interior. It is a poignant and lonely sight, a historic building that once served a busy community reduced to a sad ruin in a hamlet of scattered cottages.

Now we come to the main reason to visit this isolated church. In the graveyard surrounding the church are a fascinating number of historic gravestones and carved slabs. The most impressive of these is a wonderfully carved 14th century cross, standing about 8'4" high. The style of carving is similar to that practised at Iona Abbey. 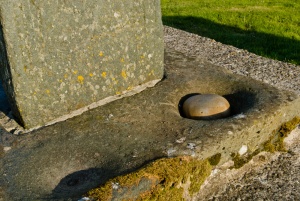 The wishing holes at the cross base

On the east face of the cross head is a depiction of the Crucifixion, with angels on each cross arm and decorative scroll-work at the top. Surrounding the figure of Christ on the cross are more figures in attitudes of adoration. Below, at the top of the cross-shaft, are a pair of figures in a niche, thought to be Thomas and Patrick Beaton, physicians in Kilchoman parish.

Below the figures is a Latin inscription, which loosely translates as:

This cross is erected by Thomas, son of Patrick the doctor. It is for the souls of his father, his mother and his wife, and the souls of all the faithful departed, and of the said...

The inscription then ends, as if the carver ran out of space. The inscription and figures are similar to a style used in the Campbeltown Cross in Kintyre. The rest of the shaft is decorated with more scroll-work and a mounted figure of a huntsman.

The reverse face of the cross head is decorated with a fantastic design of interlace in Celtic style. The shaft is carved with scroll=-work emerging from the mouths of a pair of animals at the cross base. 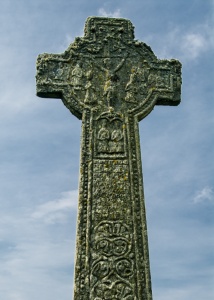 The cross face with
Crucifixion scene

The cross stands on a stepped pedestal. At each corner of the top step are curious depressions of varying depth. A local tradition says that the depressions were made by expectant mothers hoping to give birth to sons. A pestle used in these 'wishing ceremonies' can be found in one of the depressions.

In the churchyard near the cross are numerous examples of medieval carved slabs. On shows the effigy of a priest in robes. This was for many years said (incorrectly) to mark the grave of Sir Lauchlan MacLean, who died in the Battle of Traigh Ghruineard in 1598. Another stone is carved with a worn sword, but the most interesting is a shaft decorated with intricate interlace pattern, with the worn figure of a priest on the reverse.

A stone with a sword and wheel is inscribed to Colin Campbell of Sinderlin, who died in 1663. Another stone depicts a galley and sword, while a horizontal slab is carved in high relied with the effigy of a priest and an inscription to Duncan McClachlan (1732).

About 320 metres from the old church is a second stone cross, rather unimaginatively known as Kilchoman 2. The cross is 'only' about a metre high, and leans at an alarming slant, defying gravity. It is much older than Kilchoman 1, carved some time in the 9th century. Why was it built so far away from the churchyard?

One theory is that it was erected beside a holy well, or that it marked a place of sanctuary, a safe haven for fugitives. As you might expect from its age, this cross is quite a bit more worn than the taller cross beside the church. 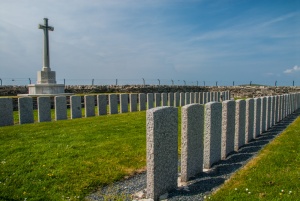 A short walk west across the fields from the church brings you to a military cemetery on the cliff top. Here you will find gravestones to sailors who died in the wreck of the HMS Otranto in 1918. On 6 October 1918 the Otranto sank in Machir Bay, just off Kilchoman.

Seventy one British crew members died in the tragedy, along with 351 American soldiers. The dead were buried in a cemetery enclosure atop the cliffs. The Americans were repatriated in 1920. Among the grave stones is one to the captain of the Otranto, Enest Davidson.

The really poignant feature of the cemetery is the large number of gravestones inscribed 'A sailor of the Great War', instead of a name, for many of the dead could not be identified. To see so many grave stones lined up in neat rows, rank upon rank, carved with 'Known unto God' is heartbreaking and really conveys the tragedy of the Otranto in human terms.

I loved visiting Kilchoman. The church is a sad place, a reminder of how much Islay and other Scottish islands have suffered from depopulation over the last several centuries, but the historic crosses and carved stones make it a compelling and fascinating place to visit. Other carved stones found at Kilchoman can be seen in the Museum of Islay Life in Port Charlotte. 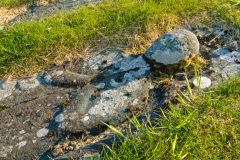 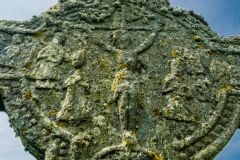 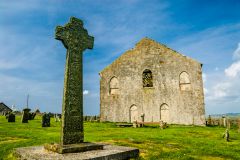 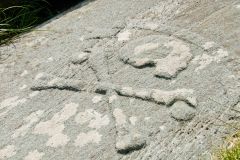 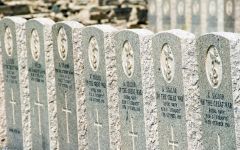 Nearby accommodation is calculated 'as the crow flies' from Kilchoman Crosses and Old Church. 'Nearest' may involve a long drive up and down glens or, if you are near the coast, may include a ferry ride! Please check the property map to make sure the location is right for you.

More self catering near Kilchoman Crosses and Old Church

More bed and breakfasts near Kilchoman Crosses and Old Church