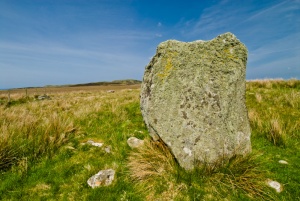 Four miles of Portnahaven on the road to Kilchiaran stands the intriguing ruin of Cultoon stone Circle. The circle is made up of 15 stones, of which 3 are standing and the remaining stones lie on the turf. At first glance, you would imagine that the recumbent stones have simply fallen over time, but you'd be wrong.

What makes Cultoon such an interesting site is that it appears to have been only partly built. Holes were dug to erect stones, and most stones were brought to the site from elsewhere, a project involving no little time and effort. A few of the stones were erected, then work was stopped. The empty holes were allowed to silt up, though one appears to have been filled in deliberately.

Why was construction of the stone circle halted? It could have been a change of belief system, or people behind the project may have died, but an intriguing local tradition says that 2 clans collaborating to build the circle argued, and refused to work with each other.

It seems that not all the stones had been brought to the site, for there are more socket holes than there are recumbent stones. 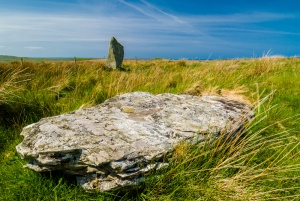 One of the large recumbent stones

When the stones were erected the ground surface was solid, but since then peat has built up, changing the surface and the level of the land. The site was investigated in 1974 ad 1975, when the empty socket holes were found.

The lead archaeologist, Euan Mackie, suggested that the circle was intended as a slightly flattened oval, about 30m x 40m, built on a standard measurement called the Megalithic yard. The result is an ellipse, on a north-east to south-west axis. This may align with the Irish mountain of Slieve Snaght, in Donegal, though you would really need a very clear day to see the mountain.

Mackie also found deposits of flint flakes beside several of the stones, suggesting that the flakes had been placed as a votive offering. The Royal Commission on the Ancient and Historic Monuments of Scotland (RCAHMS) suggests that apart from Stonehenge, Cultoon is the only stone circle in Britain which shows signs of never having been finished.

Immediately north of the circle is a natural mound with an upright stone on it. Investigation showed that the top of the mound had been burned several times, with a radio-carbon date of 1055BC+ 130. This suggests some sort of ritual fire ceremony related to the stone circle.

Fifty metres from the stone circle is a low mound that appears to be a burial chamber.

There is a small lay-by north of the circle. Don't park immediately beside the circle, as this involves climbing over the farm fence, something the local farmer is understandably annoyed by. 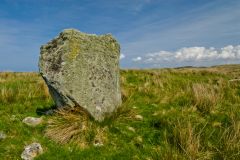 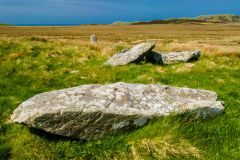 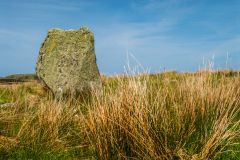 Nearby accommodation is calculated 'as the crow flies' from Cultoon Stone Circle. 'Nearest' may involve a long drive up and down glens or, if you are near the coast, may include a ferry ride! Please check the property map to make sure the location is right for you.