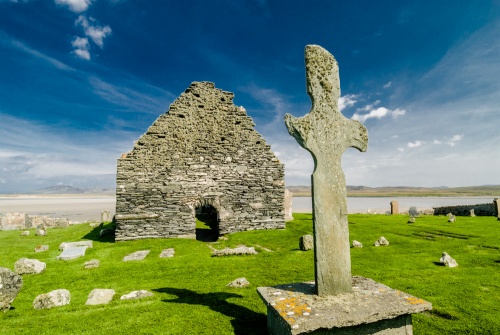 Avid bird-watchers descend on the RSPB visitor centre on the west shore of Loch Gruinart, but few visitors make the drive north along the shore to see one of the most fascinating historic sites on Islay; the ruined chapel and ancient cross at Kilnave.

The name Kilnave cromes from cill for chapel, and Naomh for holy, or saint. Another version of the chapel dedications suggests that it was named for a Celtic saint named Nem. The chapel dates to the late 14th century and stands on a level terrace of land overlooking Loch Gruinart.

The chapel may have served an early Celtic monastery, and archaeologists have discovered remains of a hermitage on the other side of Loch Gruinart.

The chapel is a simple rectangle about 14 feet by 30 feet. The striking feature of the roofless ruin is the walls, which measure over 2 feet thick. There is a low, round-headed doorway under the west gable, and unless you are very short you will have to stoop to enter.

Look for bolt holes on either side of the doorway, where a strong timber beam could be pulled across the opening for security. 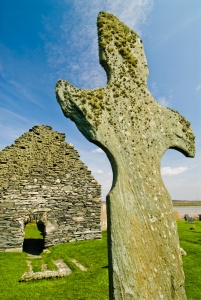 The east face of the cross

There are just two small windows; one round window in the east wall and a very small one in the south wall. The interior of the chapel must have been very dim and mysterious when the roof was still on the building.

At the east end you can see the foundations of the altar, but the altar itself is long gone. Inside the chapel are the fragmentary remains of an early cross, now lying on the ground. Outside the church is a worn medieval grave slab carved with symbols of a sword, foliage, and animals.

Near the doorway is a slab with a deep depression, similar to the depressions in the wishing stone at Kilchoman.

The chapel is interesting in its own right, but it is one reason why most people visit Kilnave, and that is to see the exceptional early Christian cross that stands in front of the chapel's west end. The cross is carved on one side only and is worn and covered with lichen, so that you really need the light at just the right angle to clearly make out the carvings.

The combination of weathering and breakage has made one of the cross arms point up to the sky and the other point down to the earth, giving the cross a very human look, a little like a scarecrow. 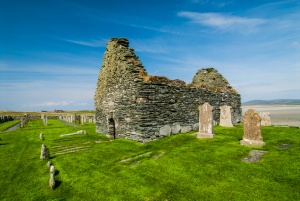 The cross stands about 8'6" high and is carved from slate. It is extraordinarily thin, so thin that it seems remarkable it was able to survive at all. If you compare the Kilnave Cross to crosses of a similar date at Kilchoman and Kildalton it is obvious that the local stone at Kilnave was simply not as hard-wearing as at other places on Islay.

No one seems certain when the cross was carved, but one likely date is some time in the late 8th century, though other estimates suggest it was carved as early as the 5th century. It certainly predates the chapel ruins by at least 400 years and quite probably much more, suggesting that the chapel stands on a site long considered sacred. After the Reformation it became part of Kilchoman parish.

Murder at the Chapel

A grim tale accounts for the chapel being roofless. In 1598 a ferocious clan battle took place nearby between the MacLeans and MacDonalds. The MacDonalds traditionally ruled Islay, but Sir Lachlan Mor Maclean claimed that the island should belong to him as part of his wife's dowry. MacLean landed at Loch Gruinart with 800-1000 men. The MacDonald ruler of Islay was MacLean's nephew, Sir James MacDonald, 9th of Dunyveg. MacDonald offered his uncle half the island, but only for his lifetime. 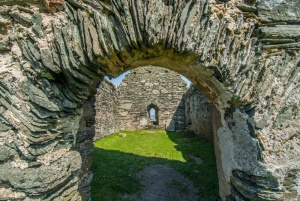 Looking into the chapel interior

MacLean refused and insisted that MacDonald surrender the whole island to him.

The outnumbered islanders, aided by allies from Arran and Kintyre, used a clever ruse to lure the MacDonalds on. They pretended to retreat intio the setting sun, then turned and attacked with the light in their enemies eyes. The MacLeans and their allies were victorious, and over 280 MacDonalds were killed. Among the slain was Sir Lachlan Mor Maclean, who was shot by an arrow through the eye fired by a dwarf named Dubh Sith (Black Fairy).

The remaining MacDonalds fled towards their boats on the shore of loch, and about 30 men were cut off from the boats and took refuge in the chapel. The MacLeans showed no mercy and burned the chapel with their enemies trapped inside. Only one man survived the blaze.

Sir John MacDonald was also killed in what became known as Battle of Traigh Ghruinneart, or the Battle of Gruinart Strand.

Kilnave is one of the most picturesque sites on Islay, and the bizarre shape of the slender cross makes it one of the most compelling historic crosses to visit in the west of Scotland. 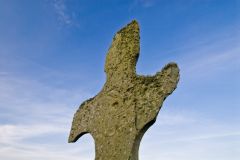 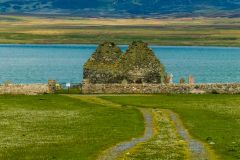 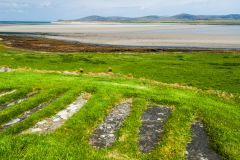 Nearby accommodation is calculated 'as the crow flies' from Kilnave Chapel and Cross. 'Nearest' may involve a long drive up and down glens or, if you are near the coast, may include a ferry ride! Please check the property map to make sure the location is right for you.

More self catering near Kilnave Chapel and Cross

More bed and breakfasts near Kilnave Chapel and Cross