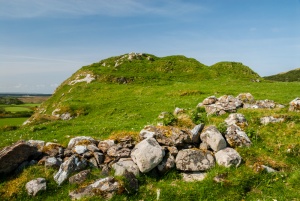 Dun Nosebridge from the west

Dun Nosebridge is an ancient hill fort set on a rocky outcrop overlooking farmland east of Bridgend. There are around 80 similar duns on Islay, but Dun Nosebridge is one of the largest and best-preserved. Most hill forts on Islay were built between 1000 BC and AD 400, and Dun Nosebridge probably fits into the same date range, though it is highly likely that the hilltop was occupied before and after those dates.

The name is a bit obscure. Dun is the Scottish Gaelic term for a fort. Nosebridge may come from the Old Norse 'knaus-borg' for 'fort on the crag', or 'hnaus-bog', meaning a fort of turf. The hilltop site was built by hand, with huge banks topped by walls of stone and turf. It was a project that took enormous levels of cooperation and organisation over a long period.

The hilltop is crowned by a rectangular series of ditches and banks enclosing an area about 30m by 17m (96 feet by 55 feet). A gap in the walls on the north side of the fort serves as the main entrance. The east side of the hill falls away sharply, providing a natural defence, but the other sides are defended by a pair of ditches and counter-scarped banks, with 4 ditches and banks at the south-west corner. 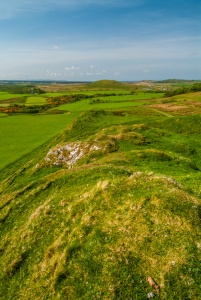 The view east from
the dun walls

The stone walls are completely covered with turf in most places, giving the impression that this was purely an earthwork fort, but the impression is misleading. Archaeologists from the Royal Commission on the Ancient and Historic Monuments of Scotland (RCAHMS) suggest that there was a timber fort atop the hill. The site has not been excavated, but a survey in 1961 suggested that boulders from the stone walls have collapsed inward, into the fort. There is evidence of cultivation within the fort, suggesting that it was not merely a short-term defensive stronghold.

On the slopes northeast of the fort are the foundations of 18th and 19th-century buildings. This may be the remnant of a settlement at Nosebridge. History records that clearances in the Nosebridge area took place from 1848-1853, when Islay estate was administered by a receiver from Edinburgh named James Brown. It is likely that the foundations we see are houses abandoned during these clearances.

Dun Nosebridge isn't the easiest place to find, but if you follow these directions you shouldn't have any problems. From Bridgend take the A846 towards Bowmore, then turn left onto the minor road to Cluanach. Just after the road crosses the River Laggan there is a a small parking area by a cluster of houses on the right side of the road. From the parking area walk back up the road, over the bridge, and turn right on a farm track.

You will see the dun ahead of you, though the track bends to avoid a boggy area, and it should take no more than 20 minutes each way. Though you can climb the western slope of the fort it is easier to follow the track to the left (north) of the fort, where the ascent is easier.

The views from atop the hill are simply wonderful; you can see for miles over the surrounding farmland, and it is easy to imagine how safe and dominant the inhabitants of the dun would have felt on their hilltop.

NOTE
Because Islay is an island the 'nearest accommodation' properties listed below may not be on Islay itself but on the Scottish mainland. The best source we have found for accommodation on the island is Isle of Islay, a dedicated local website offering a wonderful mix of local information, history, activities, and accommodation information. Highly recommended. 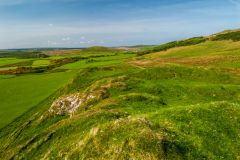 Nearby accommodation is calculated 'as the crow flies' from Dun Nosebridge. 'Nearest' may involve a long drive up and down glens or, if you are near the coast, may include a ferry ride! Please check the property map to make sure the location is right for you.

More self catering near Dun Nosebridge