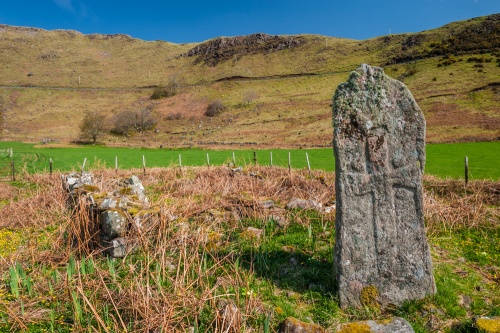 The south coast of the Ardnamurchan peninsula is dotted with ancient sites. One of the most intriguing is at Camas nan Geall (Bay of Strangers), near Glenborrodale, where a Neolithic or Bronze Age standing stone stands immediately beside a post-medieval burial ground with several finely carved gravestones.

The coastal plain is formed in a crescent shape, under the bulk of Ben Hiant (holy mountain) to the west. The plain has been in use since at least the late Neolithic period. Just north-east of the burial ground stand the ruins of a Neolithic chambered cairn. 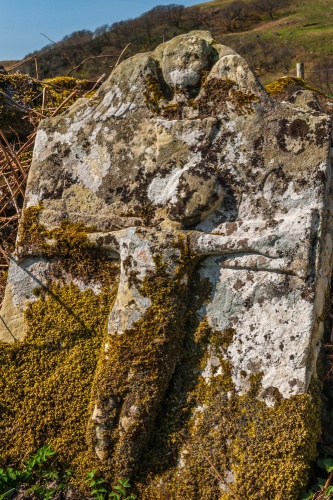 One of the 1737 Campbell gravestones

Closer to the foreshore is the burial ground, possibly built by the Campbell family of Ardslignish in the 18th century. The Campbells would have needed their own burial ground, since they were Catholic, and would not be allowed to bury their dead in Church of Scotland consecrated ground.

The burial ground is composed of a ruinous outer stone wall protecting an inner enclosure of lime-mortared rubble. The area is on a NE/SW axis and measures roughly 8.2m x 5.9m. The walls are up to 0.5m thick and reach 0.9m in height. The outer enclosure wall is almost completely destroyed.

Inside the rectangular burial ground are several well-preserved gravestones including a pair dated to 1737. On the left is a stone carved with a crucifixion scene in high relief, while on the right is a Campbell coat of arms between pilasters. Both stones are topped by figures of cherub heads. Other carved gravestones lie scattered around the enclosure, though none of these is so well-preserved as the two larger stones. 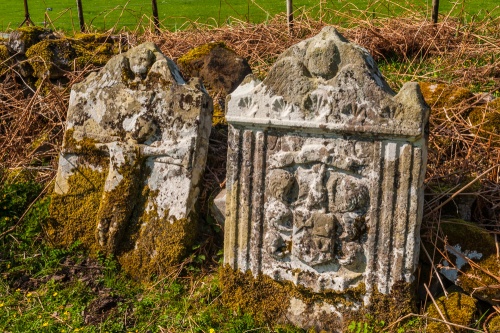 The burial ground is interesting for the two large Campbell gravestones but the real interest at Camas nan Geall is the standing stone, immediately outside the western end of the structure, closer to the shore. The stone is at least 4,000 years old and dates to the late Neolithic or early Bronze Age period.

If we assume that the stone is in its original position, then it would seem that the burial ground was erected here because the site already had a local tradition as a sacred site.

The relatively flat west face of the stone is carved with a large cross, facing the sea. Above the cross is the figure of an animal, probably a dog with an upraised tail. Above the animal, and just barely visible, is another small cross. The large cross is in traditional Latin form (i.e. with the vertical beam extending above the crossbeam). 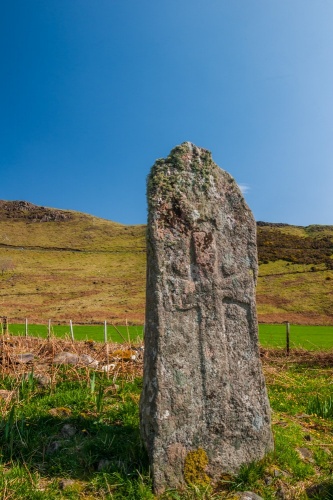 The carved cross face of the standing stone

The cross carving is 1.2m high and has wedge-shaped side arms. In the arm angles are circular objects like balls that are called 'pellets'.In the centre of the cross is an incised crosslet.

It is fascinating to see a pagan standing stone adapted for Christian worship.

The name Cladh Chiarain comes from St Ciaran mac an t-Saeir, a 6th-century Irish saint who is said to be buried here. Might the carved cross indicate his grave? The site does not appear to have been excavated, so it is certainly possible that the pagan standing stone was adapted for use at the time when St Ciaran lived - and died - here.

St Ciaran (516-549) was born in County Roscommon in Connaught, Ireland. His family name 'mac an t-Saeir' means son of the carpenter'. He is one of the Twelve Apostles of Ireland. He studied under St Finian and founded the Monastery of Clonmacnoise, one of Ireland's most important centres of scholarship and religious life.

The most widely accepted tradition is that he died at his monastery of the plague, still in his early thirties, but here in Ardnamurchan tradition says that he is buried here at Cladh Chiarain. 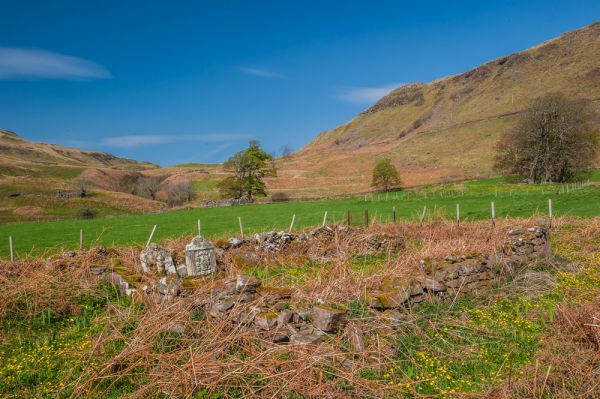 You can easily spot the collection of historic sites at Camas nan Geall from the B8007 coastal road about 2 miles west of Glenborrodale. There is a small parking area just off the road, followed by an easy walk out onto the level ground above the beach.

This is a magical place, in an unforgettably scenic location. There are no signs or interpretation panels to get the most out of your visit, but it is well worth the short walk down to the ruined burial ground, the chambered cairn, and the standing stone.

On the western headland of Camas nan Geall is an Iron Age promontory fort, while to the south of the burial ground is a second, older burial ground, now almost completely overgrown. 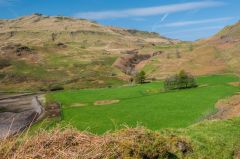 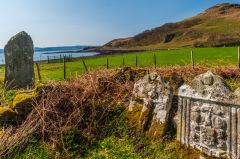 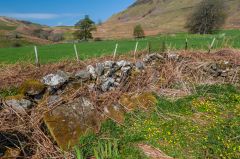 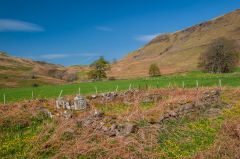 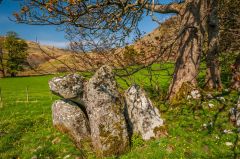 Nearby accommodation is calculated 'as the crow flies' from Clad Chiarain Burial Ground and Standing Stone. 'Nearest' may involve a long drive up and down glens or, if you are near the coast, may include a ferry ride! Please check the property map to make sure the location is right for you.