HERITAGE HIGHLIGHTS:   Home of the Lords of the Isles and Clan Donald 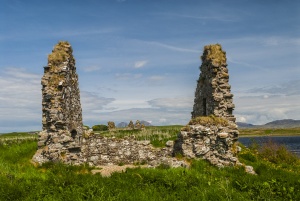 Finlaggan is one of the most fascinating historic sites in western Scotland, based around a pair of small islands in Loch Finlaggan, near Ballygrant. It is easier to think of Finlaggan as a palace and settlement rather than a castle.

Finlaggan Castle and chapel stood on the largest of the two islands, now linked to the shore by a modern causeway and bridge. The castle served as the administrative centre for the Lords of the Isles and Clan Donald from the 13th century until the Lordship was taken over by James IV of Scotland in 1493.

The Lords of the Isles were descended from a 12th-century prince named Somerled. The Lords, also chiefs of Clan Donald, held sway over a vast swath of land encompassing most of the Inner and Outer Hebrides and parts of the mainland of western Scotland, and were independent of the Scottish crown.

Finlaggan acted as the centre of this island empire and was most known as the site where new Lords of the Isles were crowned. For this reason, Islay is often called the 'Cradle of Clan Donald'. 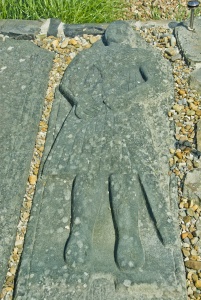 In a sense, Finlaggan acted much as Westminster Abbey did in England; a place where religion and political power came together to anoint a new leader and underline the power of the leader. When a new Lord of the Isles was crowned, the ceremony brought together the Bishop of Argyle, the Bishop of the Isles, and as many as seven priests to attend them. The heads of all major clans had to be present.

One of the traditions was that the shape of a footprint was carved into a rock, and the new lord, clad in white, placed his foot in the footprint, symbolically stepping in the footsteps of his ancestors and vowing to uphold their traditions and honesty in rule.

When the ceremony was finished the Lord feasted his people for seven days and gave largesse to the clerics, musicians, and bards who took part on the ceremony. After the new Lord was installed he would gather his councillors together and retire to Council Island to go over the most important administrative questions of the day. Here the Lord would judge legal cases, and issue proclamations.

The castle, chapel, and a modern visitor centre are now in the care of a charitable trust. The trust has converted a derelict farm building into a museum, where you can see items found during excavations at the site. Among the range of artefacts on display is a fascinating quilted garment of sheep wool worn under armour. Another artefact is a medieval cross used by the Lords of the Isles. Other finds at the site include a musical instrument pin, a cross-head, and a quern. Finlaggan was excavated for the popular Channel Four television series Time Team in 1995. 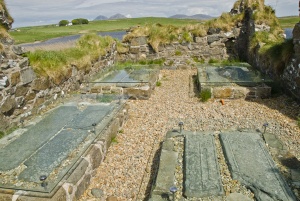 Grave slabs in the chapel

The history of Finlaggan is confused. There seems to have been an Iron Age fortification on the large island. Then sometime in the 13th century a stone castle was built atop the earlier fort. This in turn was torn down, possibly in the 15th century. Later a council house was built atop part of the castle ruins.

From the museum you walk downhill to the loch, where a causeway leads over the marshy ground to Eilean Mor (large island). A nearby smaller island called Eilean na Comhairle (Council Island) was traditionally used to hold council meetings, while the larger island housed Finlaggan Castle and chapel. The trail to the castle also passes the remains of 16th-century 'lazy beds' used to cultivate crops. The lazy beds were built on top of Bronze Age huts.

The modern boardwalk does not follow an ancient causeway. About 30m south west there appears to be a line of boulders extending out into the loch, so perhaps there was a simple causeway for access. However there also appears to be the remains of a pier of stones on the north west shore of the island, so it is possible that the only access was by boat, which certainly have added to a sense of security.

The remains of a 14th-century chapel occupies the highest point of ground on the island, surrounded by a burial ground. A number of medieval and slightly late grave slabs have been brought together here under protective coverings. The finest belongs to Donald MacGilleasbuig, chief tenant in the 1540s. another, more worn grave slab depicts a 16th-century knight. Nearby is the poignant grave slab to a small child. 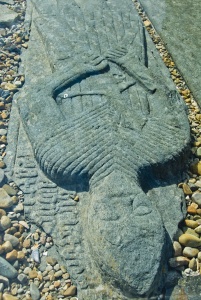 Effigy of Domhnall
Mac Gilleasbuig, tenant of
Finlaggan in the 1540s

The castle is at the north eastern end of the island. Its ruinous walls outline an area of about 5.7m x 4.8m, with walls about 0.9m thick. The walls still stand almost to gable height at both ends.

Nearby are the foundation walls of as many as 7 buildings, possibly signs of a later settlement built after the Lordship was seized by the crown.

The visitor centre is open daily from spring through autumn, but the island itself is accesible at any time. The site is well signposted one mile past Ballygrant on the A846 to Port Askaig. Look for a rather large standing stone just outside the visitor centre, looking down on the loch.

I was awed by Finlaggan. There are places where an aura of history clings, and Finlaggan is one of those. To stand on Eilean Mor, with the chapel and council house ruins about you, and realise you stand in one of the most important, even sacred places of an ancient kingdom is truly moving and awe-inspiring. I highly recommend a visit. 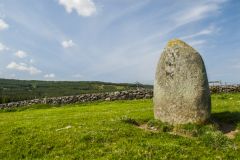 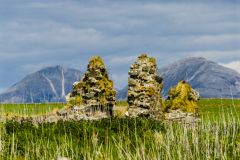 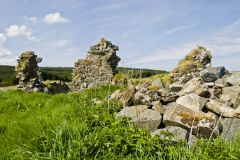 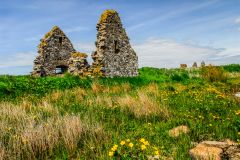 Nearby accommodation is calculated 'as the crow flies' from Finlaggan Castle. 'Nearest' may involve a long drive up and down glens or, if you are near the coast, may include a ferry ride! Please check the property map to make sure the location is right for you.

More self catering near Finlaggan Castle