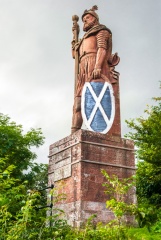 William Wallace was a commoner, the younger son of a small landowner in Ayrshire. When Edward I forced the Scottish landowning class to sign the Oath of Loyalty (otherwise known as the Ragman Roll), Wallace refused. For this act of defiance, he was proclaimed an outlaw. The Sheriff of Clydesdale, an English appointee, burned Wallace's house and put his wife to death.

In revenge, Wallace killed the Sheriff and called on his fellow Scots to rebel against the English. He raised a following - it would be wrong to call them an army, for they were mostly common folk, armed with weapons like swords, spears, and knives.

Andrew Murray of Moray answered the call and raised an army of northern Scots. But very few of the leading nobility took up Wallace's challenge. The divisions with the ranks of Scottish nobility went deep. Some simply refused to follow a commoner like Wallace, and many had stronger ties to England than to Scotland.

One who did follow Wallace's lead was young Robert Bruce, who saw the chance to reassert his father's claim to the kingship of Scotland.

The Battle of Stirling Bridge
Edward I thought it would be an easy task to disperse the ragtag body of Scots under Wallace. But Wallace enjoyed some early success, and more commoners flocked to his banner. Murray and the men of Moray joined with Wallace and marched on Stirling.

On 11 September 1297, the well-trained English army met the rebels under Wallace at Stirling Bridge. The Scots were heavily outnumbered and should have been put to flight. But superior tactics and knowledge of the boggy ground enabled Wallace to decimate the superior English force. Murray died from wounds received in the battle, but Wallace had proved that victory over the English was possible.

Wallace was named Guardian of Scotland by the nobility, who recognised the high profile he had among the common people. Wallace had no desire for the crown (nor any claim to it). He tried to have John Balliol returned to the throne, and he made raids across the border into England. One of the main difficulties Wallace faced was not the English, but his fellow Scots; too many of the Scottish nobles placed their own self-interest first and refused to cooperate with Wallace or join in his grand national vision.

Edward gathered a fresh army and in July 1298 he marched north into Scotland once again. He met Wallace at Falkirk in a pitched battle. This time the superior strength of the English army won the day and Wallace was forced to flee. He gave up direct leadership of the Scottish rebellion but continued to fight a guerilla war against them for the next 5 years. Edward launched repeated attacks but Wallace did not make the mistake of meeting his enemy in a pitched battle again.

In 1305 Wallace was betrayed to the English and taken prisoner. Thus his fellow Scots accomplished what the might of Edward's English army could not do on its own. Wallace was taken to London, where he was cruelly put to death as a traitor.

The real legacy of William Wallace's struggle for independence from England was a growing pride among the Scots and a sense that they could defeat the English. That defeat would ultimately come at the hands of Wallace's one-time ally, Robert Bruce the younger.


Muir of Ord (Self catering) This detached cottage is located near the village of Muir of Ord, close to Beauly, and can sleep ten people in five bedrooms.
Sleeps 10 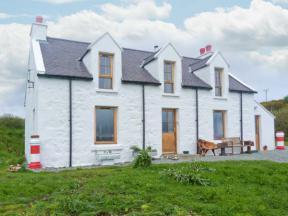 This detached, whitewashed stone cottage in the crofting hamlet of Totaig near Dunvegan on the Isle of Skye can sleep up to four people in two bedrooms.
Sleeps 4