Margaret, the Maid of Norway, was only 3 years old when her grandfather, Alexander III died. The English king, Edward I, saw a perfect opportunity to join the English and Scottish kingdoms. He proposed to marry his son to the infant 'Maid of Norway'.

The match was agreed, and Margaret set sail from Norway for Scotland. What might have happened if the match had taken place is anyone's guess, but it is reasonable to suggest that it might have created a unified kingdom of Great Britain about 4 centuries before such a kingdom actually came into being.

But fate had other ideas. Margaret fell ill and died on Orkney on her journey. She never reached Scotland, and the marriage to Prince Edward of England never took place.

So now Scotland had a problem. There was no clear choice of monarch to take the throne. Not that there was any shortage of nobles ready to take on the role of king. Fully 13 noblemen claimed the throne. Of these, only two were able to gain any measure of support; John Balliol and Robert Bruce of Annandale.

Trouble was brewing, as supporters took sides behind one claimant or the other. The Bishop of St Andrews was afraid that the struggle for the throne would quickly turn to bloodshed. He proposed a solution that today might be called binding arbitration. Since both Balliol and Bruce had land in England, they were both vassals of the English king for that land. The Bishop suggested that Edward I of England, as the feudal lord of both men, be asked to decide which of them should take the throne.

Who had the better claim to the throne? Well, it depends whether you adhere to the concept of primogeniture or not. Both claimed descent from David I through his grandson David, Earl of Huntingdon. Balliol was the grandson of Earl David's eldest daughter, while Bruce was the son of Earl David's second daughter. So Bruce was of an earlier generation, but if you calculate inheritance through the line of the first-born, then Balliol had the better claim.

King Edward chose John Balliol, mostly because he felt that he could control Balliol. He was right, at least for a start. For four years Balliol ruled, and for much of that time, he simply did whatever Edward wanted. As for Bruce, he ceded his own claim in favour of his son, also named Robert. It is this younger Robert who would later gain fame as Robert the Bruce.

In 1295 the uneasy relationship between Edward and the Scots came to a head. Edward was keen to fight the French and asked the Scots for support. The Scots nobility refused. Even Balliol, Edward's puppet, dug in his heels at last and refused. Instead, he and the Scots allied with the French against the English. This allegiance was the start of the strong ties between France and Scotland that became known as The Auld Alliance.

By contrast with Balliol, the elder Robert the Bruce, and other Scottish nobles who held estates in England, joined with King Edward. Balliol was furious with his old rival. He seized Bruce's land in Scotland and gave them to his relative, John Comyn. This was the start of the feud between the Comyn and Bruce families that was to have fatal consequences in the next generation.

Edward I was angered by Balliol's defiance. He gathered an army and marched north into Scotland. He sacked Berwick and Edinburgh and captured King John. But Edward had further blows to strike against the Scots. He seized the Stone of Destiny, the ancient stone used in the coronation ceremony of Scottish kings. He also forced the leading Scottish nobles to swear allegiance to the King of England. The Oath of Loyalty was called the Ragman Roll, a derisive moniker used because of the number of ribbons and seals on the document.

This detached cottage rests near Ullapool and can sleep four people in one bedroom.
Sleeps 4

Muir of Ord (Self catering) 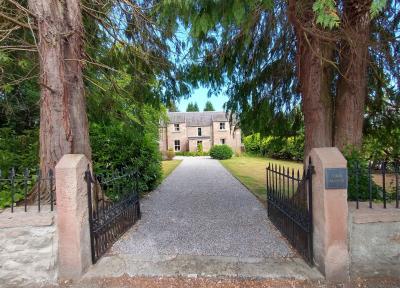 This detached cottage rests in Muir of Ord, Scotland and can sleep eight people in five bedrooms.
Sleeps 8