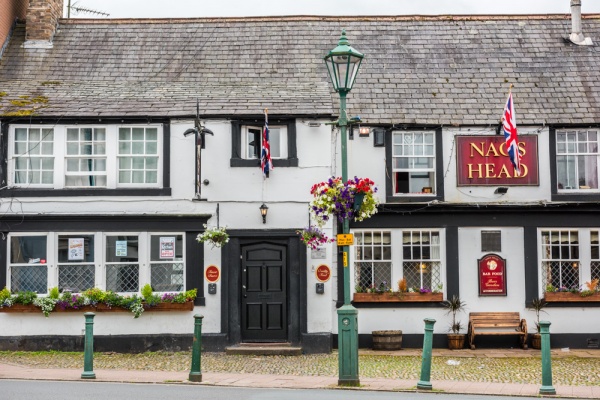 The historic market town of Brampton dates to at least the 7th century when it was settled by the Angles. The town name probably comes from the Old English for a place of brambles or thorns, which still thrive on the sandy soil. The town originally grew up a mile to the north-west. The entire village was forced to move to make way for the local lord's deer park. The parish church stayed where it was, and for 600 years the people of Brampton had to walk a mile to the old church.

The town owes its growth to the grant of a market charter in 1252, which made Brampton a trading centre. In 1758 the military road between Carlisle and Newcastle brought new growth, as did the thriving cotton-weaving industry in the late 18th century. Most of the town centre was rebuilt in the 18th century when coal mining prospered in the fells south of town. Most of the buildings were made with red sandstone quarried at Gelt Woods.

By the turn of the 19th century, there were 45 pubs in Brampton to serve a population of just 3000. Not surprisingly, drunkenness was a problem, until Lady Carlisle launched a Band of Hope to suppress the worst of the offences. Most of the pubs lost their licenses and today only seven remain, One of these is the picturesque Nag's Head Inn, made from a pair of 17th-century houses. 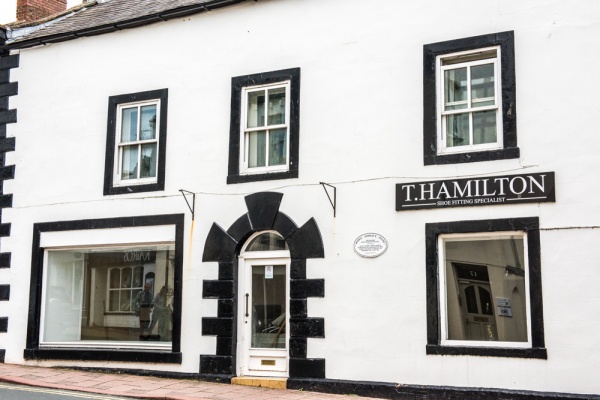 Not far from the Nag's Head is Prince Charlie's House, one of the oldest buildings in town, which was mentioned in a survey in 1603. The house is so named because Bonnie Prince Charlie stayed here in 1745 while his army besieged nearby Carlisle. The Mayor of Carlisle surrendered the keys to the city to the prince in front of the house.

A short walk from Prince Charlie's House is Half Moon Inn, where the French Ambassador was quartered during the Prince's assault on Carlisle. When the siege was over the Ambassador departed, but left behind a beautifully crafted French dress sword and a bonnet.

One historic that used to be a pub is the Conservative Club on Front Street. The Club was originally an inn called the Black Bull, and also served as a butcher shop. Just off Front Street is Chandler's Lane, whose name recalls a busy candle-making industry.

Another historic inn is the Howard Arms on Front Street, which has a plaque on its wall proudly proclaiming that Charles Dickens slept there. Each of the inn's bedrooms are named for a character from a Dickens' novel. 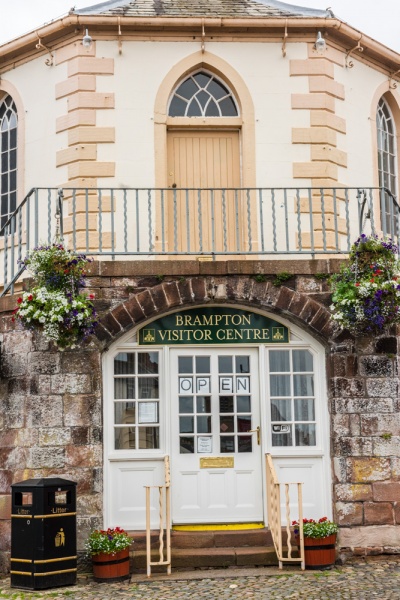 This picturesque Moot Hall has been the centrepiece of Brampton's market place since 1648, when Oliver Cromwell imprisoned 40 prisoners here. The present building dates to 1817 and was built for Lord Carlisle. It originally stood on piers, with an open space for market stalls at ground level. In 1896 the ground floor was enclosed and the building was given to the Parish Council.

Outside the Moot Hall is a set of iron stocks used to punish local miscreants. It was last used in 1836. Set into the cobbles in front of the Moot Hall is an iron bull ring, used to tether bulls for baiting by dogs. Bull-baiting was a very popular form of entertainment as late as the 19th century. On the south-west wall of the Hall is a plaque to Peter Burn, a local poet.

The ground floor of the Moot Hall is now home to the tourist information centre, while the parish council holds regular meetings upstairs. Open-air markets are still held around the Moot Hall on a weekly basis. 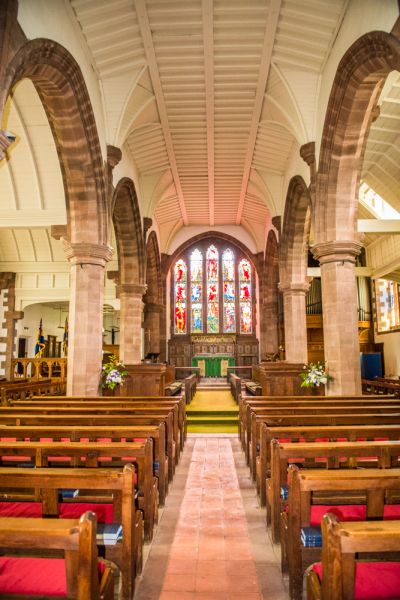 While the town centre is full of attractive 18th-century buildings, the parish church of St Martin is much newer; it was designed by the Pre-Raphaelite architect Philip Webb, the only church that Webb worked on. The interior is a delight, featuring superb stained glass windows by Webb's contemporary Edward Burne-Jones.

Just beyond the church at the corner of Carlisle Road is the Old Police Station, built in the late 1880s. It replaced a much smaller building founded as a National School in 1816. A few steps along Carlisle Road from the police station is Oulton House, built around 1603. Oulton House was the home of the Foster family of violin makers. One of the family moved to London and became the first British publisher to publish works by Mozart and Haydn. 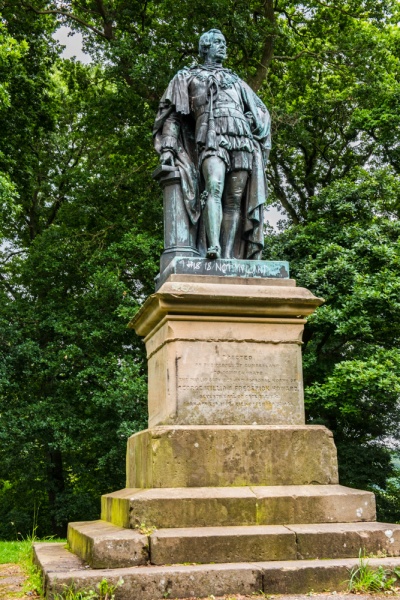 The Earl of Carlisle statue on Brampton Motte

On the east side of town, reached by a footpath off Moat Street, is the treed hill of Brampton Motte, more commonly known as The Mote. Though the hill itself is a natural feature, its summit is man-made, and formed the base of a late 12th-century motte and bailey castle. From the top of the castle motte, you can get panoramic views over the Solway Firth and the Pennines.

The motte was topped by a timber palisade, with water drawn from four wells. In the 15th century, the castle mound was used as a signalling beacon to warn of impending attack by Scottish raiders. Atop the mound is a statue of the 7th Earl of Carlisle, George William Frederick Howard, 'erected by the people of Cumberland to commemorate his public services and personal worth'. 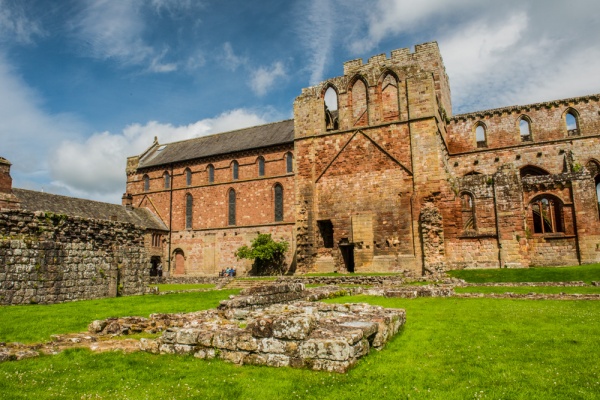 Further outside Brampton is Naworth Castle, a Tudor house that is home to the Howard family, Earls of Carlisle. Naworth Castle dates to the 13th century, and served as home to the powerful Lords of Marches, charged with keeping peace in the turbulent border region. The house is not usually open to the public, but there are several footpaths through the grounds.

At the bottom of the hill below Naworth Castle lies Lanercost Priory, founded in 1166 for Augustinan canons. Edward I stayed at the priory in 1307 on his way to invade Scotland for the last time. The gravely ill king dies shortly after leaving Lanercost. The monastic church dates to the 13th century. After the Priory was dissolved by Henry VIII the church lived on as the parish church. Historic highlights include the Lanercost Cross, a carved cross shaft dating to 1214.

About 5 miles from Brampton is Birdoswald Roman Fort, one of the best-preserved forts on Hadrian's Wall. The fort was built to defend the place where the Wall crossed the River Irthing. It is remarkably complete, and you can even see remains of the turf wall that preceded Hadrian's Wall.

Exploring Brampton is a delight. Our family parked in the small public car park off the Main Street. We picked up a very useful town trail from the tourist information centre in Moot Hall and spent several extremely enjoyable hours rambling about the old town.

NB
Don't mistake this Brampton with the small Cumbrian village near Appleby-in-Westmorland (or indeed the plethora of other Bramptons around England - I counted nine examples of Bramptons outside Cumbria). 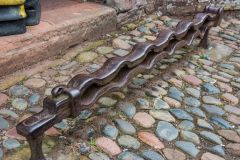 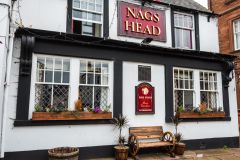 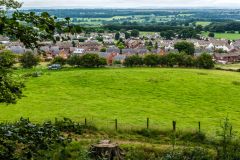 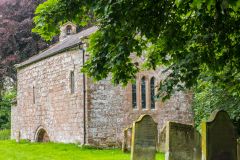 More self catering near Brampton

More bed and breakfasts near Brampton