Not-to-be-Missed Treasures and Pleasures From London's Ancient Past 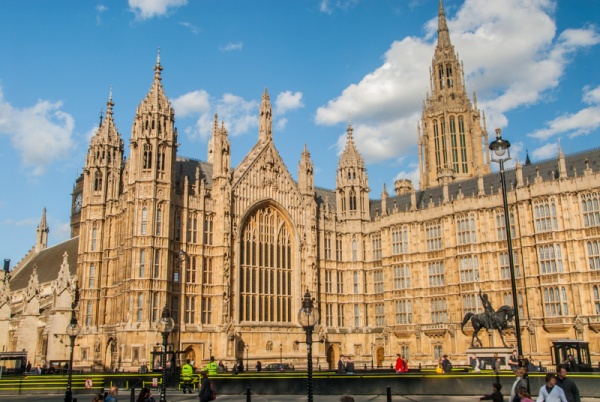 The Palace of Westminster, London

Although fueled by our quirky passion for all things Ancient and English, our recently-published book, Amateur Historian's Guide to Tudor and Medieval London, was actually born out of frustration. Determined as we were, on our first trip to London together, to poke into all of the city's ancient nooks and crannies, we found ourselves working with about 15 different guidebooks. Still, we could find no mention of several historic sites we knew existed . . . and we kept stumbling across other treasures not discussed in the "popular" guides.

At last (over late-afternoon libations), we decided we had a duty to our fellow amateur historians to write our own book; a compendium of the medieval and Tudor vestiges which can still be traced in London, along with insights about the people and events that made those sites so significant.

Over the course of writing our book, we travelled to London six separate times. Believe us, that's a lot of visits to the Tower of London (not that we're complaining) and many, many miles of walking the Roman Wall. And although we have yet to find a corner of ancient London we didn't absolutely love, we have, of course, developed a particular fondness for certain places - special sites that we could (and will!) visit again and again.

If you have only a few days in London in which to indulge your hunger for medieval and Tudor history, here's our list of not-to-be-missed treasures, divvied up over several days. Some may surprise you; all, we're certain, will delight you! 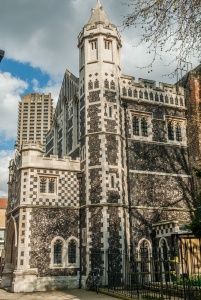 If the earliest Roman settlers thought the conquest of the insular Britons would be a fait accompli, they were in for a rude awakening! Years of continued fierce opposition from the local clans culminated in catastrophe in 60 CE, when the Iceni tribe, led by the East Anglican warrior queen Boudicca, burned the Roman settlement of Londinium to the ground.

It took Londinium nearly a decade to recover from the devastation, but by 200 CE, the Romans had surrounded their turf with a massive wall that would define the boundaries of the City of London for the next 1,000 years. (When your mission is to build an empire, you can't afford to make the same mistake twice!)

Construction of the wall began east of the (yet-to-be-built) Tower of London and ran north to Aldgate, jogging northwest to Cripplegate, then south/southwest to Aldersgate and Newgate, before veering down Ludgate Hill to the River Thames.

This massive wall - 15 to 20 feet high and 8 feet thick - was repaired, re-fortified and heightened at various stages throughout the medieval era. Today, you can follow the outline of the ancient wall. Not only will this provide you with a sense of the boundaries of medieval London, but it will also reveal fragments of the City's ancient past that could otherwise be missed on a "greatest hits" tour.

One day in London? Go off the beaten track!

If you have only one day to spare, make it count by discovering the remarkable (but less well-known) attractions of London. As much as we love both the Tower and Westminster Abbey, we really do not think you can do justice to either in under half-a-day each. We recommend that you avoid the crowds and take home memories your friends and family may have missed! Here's what we suggest you see:

The oldest surviving parish church in London (and the most complete example of Norman architecture), this church was built in 1123 by Henry I's court jester, Rahere . . . who, to this day, occasionally stops by for a ghostly visit! London's only medieval baptismal font, Rahere's elaborately-painted effigy, a lovely 16th-century oriel window and handsome Tudor memorials are just a few of the attractions of this incredibly evocative building.

This is one of our favourite places in London, serene and spiritual. If something about the church strikes you as familiar, think "Hollywood". . . both Shakespeare in Love and Four Weddings and A Funeral had scenes filmed inside St Bart's.

Whether your passion is medieval history or simply ancient architecture, this is one of London's most rewarding stops. Built in 1170-1185, this rare round church was inspired by Jerusalem's Church of the Holy Sepulchre. Of primary importance are the effigies of nine fully armoured crusading knights, dating from the 12th through the 14th centuries. Look for William Marshall, Earl of Pembroke, a towering figure of the early Middle Ages. Marshall was knight in service to Henry II, served as Marshal of England under King John and as Regent during the minority of Henry III. We warn you, though: this church, while well worth the visit, has highly irregular open hours. Please be sure to check ahead to avoid disappointment.

If the weather is cooperating, take the Underground to this too-often-overlooked south London neighbourhood. Wind your way west-bound on foot along Tooley Street and the River Thames, following directional signs to at least three of the vicinity's stellar attractions: Southwark Cathedral, Winchester Palace, and the recreated Globe Theatre. The cathedral ranks at the top of our favourite spiritual retreats - truly beautiful and very, very old. Winchester Palace was the London seat of the bishops of Winchester for over 500 years; although a ruin, its sense of grandeur can still be appreciated. There are two ways to enjoy Shakespeare's Globe Theatre - by joining the exceptionally well-done guided tour or by catching an open-air performance in a setting that does a fine job of replicating an Elizabethan theatre experience.

What can we say? The Tower is in a class by itself. Allow at least four hours to enjoy the Tower fully - we've been known to spend six hours here and leave grudgingly! To get the most out of your visit, read the history first (it's in our book, natch). You won't regret it. Tales of elaborate ceremonies, bold escapes and tragic deaths pepper the dramatic history of the Tower. A little advance preparation will help the people and events spring to life as you wander around the ancient grounds and buildings.

So many dead kings (and queens!), so little time! Go to pay homage to the various Edwards, Henries, Marys and, of course, Elizabeth I. While standing in front of the high altar, reflect upon the fact that every monarch since William the Conqueror has been crowned on this spot. Again, allow at least four hours so you can include St Margaret's Church, (built alongside the Abbey so that the "common folk" would not disturb the monks at prayer) and the Jewel Tower, one of the very few surviving remnants of the medieval Westminster Palace.

Did You Know?
When William the Conqueror was crowned King of England on Christmas Day 1066, the crowd gathered in Westminster Abbey was asked in English to acknowledge him as their king. The responding shouts alarmed the nervous Norman guards waiting outside. They thought their liege lord was under attack. Immediately, they set fire to all the buildings surrounding the Abbey. Who knows what they hoped to achieve with this manoeuvre. One would have thought that they would have rushed into the church to save their leader. At least they created a spectacular bonfire in celebration of his coronation.

The ultra-modern building straddles the site of the old Roman fort, with wonderful exhibits linked, by and large, to London, per se. We even enjoyed the displays that weren't from our era, and the bookstore is one of our favourites.

Ready for some exercise?

Walk the London Wall. It will get your legs moving, your blood pumping, and your mind stretching. You can begin at the Tower of London and walk counter clock-wise or follow a clockwise pattern from the Museum of London. There are 21 sections of the wall to be "discovered" - finding them all is the challenge. A true historical treasure hunt.

It's London, ignore it! (Although this isn't necessarily the time to catch an open-air performance at the Globe.)

Five or more days? London is yours!

You can easily cover all of the medieval and Tudor sites in London over the course of five days, depending on how much time you want to devote to the more complex attractions. Of course, we have advice on how to structure your time.

First, a word about London's ancient churches. We feature over a dozen of them in our book. Do not (we repeat: DO NOT!) try to visit all of the medieval churches in the City of London in one fell swoop. Our advice is based on experience. We did see them all in one day, and found ourselves suffering from Crypt-o-mania well before the day was out. All of the churches are well worth seeing - over a period of days. The same advice goes for the many London museums . . . even if you focus on displays from the Middle and Tudor ages, there's simply too much to take in during a concentrated tour. Our rule of thumb: ancient sites for half a day, museums for the other half.

We also strongly encourage you to see the medieval Guildhall, but this may take some advance planning, for the building closes frequently for private functions.

We hope our tips help you discover a side of London you've never seen before, and that you find it as fascinating, entertaining and engaging as we do. Now, enjoy your time in London (we are soooo jealous)!

Sarah Valente Kettler and Carole Trimble are the Amateur Historians. In addition to their recently-published guide to Medieval & Tudor London, the authors have just completed the second book in the Amateur Historians series, Day Trips to the South of London. They are currently researching the medieval and Tudor sites to the north of their favorite city.