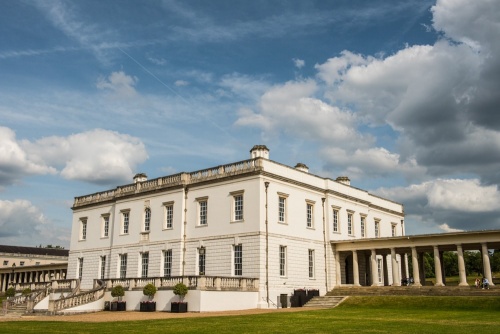 Queen's House is a masterpiece by Inigo Jones, begun in 1616. It is one of the few surviving examples of Jones' work, and has been carefully restored to his design. The highlights are the Tulip Staircase, the first example of a cantilevered staircase design, the Cube Hall, and the frescoed bedroom ceiling. The House is part of the National Maritime Museum.

Inigo Jones was a minor courtier who undertook a tour of Italy in the early years of the 17th century. Inspired by the classical architecture of Andrea Palladio, Jones returned to England, determined to recreate the glories of classical Greece and Rome in British buildings.

In 1616 work began on The Queen's House at Greenwich, part of a large building scheme for Anne of Denmark, queen of James I. The original plan included an H-shaped block extending directly over the road to Woolwich, based on the gatehouse of Greenwich Palace. Why build a palatial residence over a roadway? Well, for a start, such an arrangement allowed an uninterrupted view across a formal garden to the south, and parkland to the north.

By the time Queen Anne died in 1619 only the ground-floor work had been completed. The roof was quickly thatched to protect the interiors, and the rest of the ambitious project was quietly shelved. 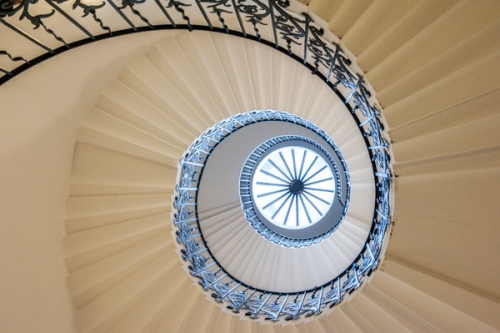 It was resurrected in 1629 for a new queen, Henrietta Maria, wife of Charles I, and extended in 1661 for Charles II and Catherine of Braganza. This addition was design by John Webb. It seems that Charles' mother Henrietta Maria was the main resident, but even she only stayed for a few months. In 1689 the house became the official residence for the Ranger of Greenwich Park.

In 1807 the house was redesigned as the centrepiece of a much larger complex of buildings by Daniel Alexander. He created east and west wings linked by open colonnades that followed the line of the old Woolwich road. The house was used by the Royal Naval Asylum for a time as a school for the children of seamen and pensioners.

In 1933 the Royal Hospital Schools moved to Suffolk, and the National Maritime Museum was established here. Inigo Jones' older part was set aside for Queen's House Gallery, showcasing historical and modern art, often with a nautical theme. 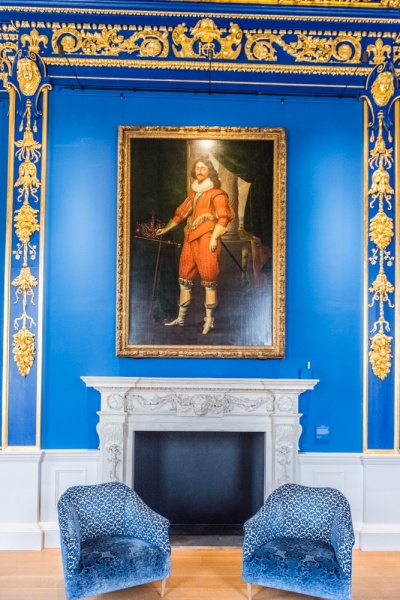 Queen's House retains an important place in British history as the first major building designed in classical style. The centrepiece of Inigo Jones' plan was a great hall based on a cube principal; that is, it forms a perfect cube, just as high as it is wide and long.

The original ceiling was a simple design in white and gold, with frescoes by Orazio Gentileschi painted on canvas. The ceiling was moved to Marlborough House in 1710. According to a rather unlikely story, Sarah Churchill, Duchess of Marlborough, admired the ceiling, so Queen Anne told her she could take it. It seems rather more likely that the ceilings had been removed and rolled up by that point for storage, and the Duchess simply acquired them for her town house.

Aside from the Great Hall, the other showpiece at Queen's House is the Tulip Stair, said to be the first truly cantilevered staircase in England; built without any supporting columns. The name comes from the wrought iron railings, which are decorated with floral patters, which might be tulips, but are more likely to be fleur-de-lis, in honour of Henrietta Maria's French heritage. Each stone stair is undercut, and when you stand at the base of the stair and look up, the effect is simply astonishing.

One work of art stands out above all others in the Queen's House Gallery; the Armada Portrait. This portrait of Queen Elizabeth I was painted to commemorate the defeat of the Spanish Armada in 1588 and is on permanent display in the Queen's Presence Chamber.

The painting is full of symbolic meaning, showing the Spanish ships floundering in heavy seas while English vessels sail on calm waters, indicating the triumph of Protestantism over Catholicism. Elizabeth wears pearls, symbolising her chastity and purity, while a circle of ruff extends from the queen's face like the rays of the sun, showing her as the source of beauty, goodness, and light.

One curious exhibit is a carved and gilded coat of arms for the South Sea Company, created in 1711 by Robert Jones. 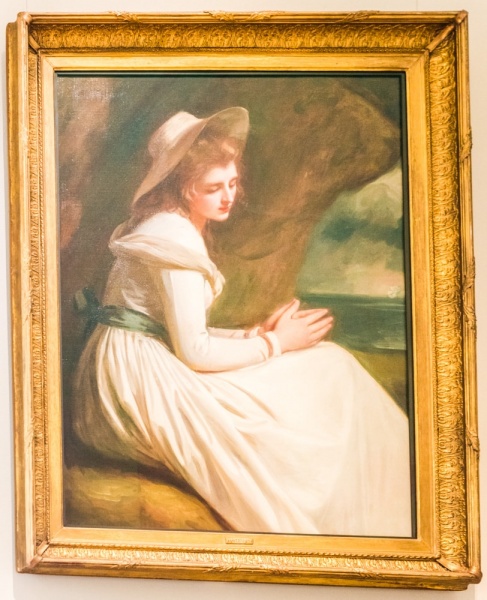 One of the paintings that caught our eye is the 'Portrait of Emma Hart (Lady Hamilton) as Absence', by George Romney, painted in 1785. Romney painted over 70 portraits of Lady Hamilton, who is more famous to history as Admiral Nelson's mistress. This was the last, created before she moved to Naples and became active in politics, fashion, and the arts. Romney kept the portrait until his death.

There is a rotating programme of exhibitions at Queen's House. The gallery is free to enter, and the colonnades are a popular place to sit and enjoy the excellent views towards the River Thames and the Old Royal Naval College. Just above, on the hillside overlooking the old formal gardens, is the Royal Observatory and Planetarium.

I didn't know what to expect at Queen's House, but I was truly impressed. Though the complex of buildings (you can't really call it a 'house') covers over 2 centuries of different styles, it truly is impressive. Walking along the colonnades, the wonderful view along the line of arches and columns is simply stunning. Not half as stunning as the view looking up from the base of the Tulip Stair, though; that is an amazing sight.

The art is quite beautifully exhibited; when we visited they had a retrospective of illustrations and portraits about the life of Admiral Nelson, and the variety of work was fascinating, from portraits by George Romney to illustrated caricatures of Nelson in contemporary journals. We enjoyed ourselves enormously and I can highly recommend a visit.

The easiest way to reach Queen's House is by Docklands Light Railway, alighting at Cutty Sark station. From the station it is a very easy 5 minute walk to Queen's House, which is located immediately beside the National Maritime Museum. Queen's House is at the base of the hill in Greenwich Park, and if you follow the obvious paths up the hill from the Gallery you will reach the Old Royal Observatory and Planetarium. 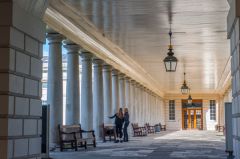 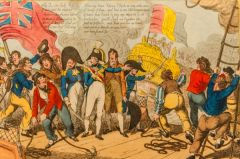 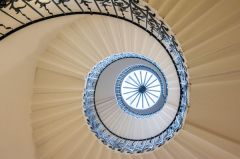 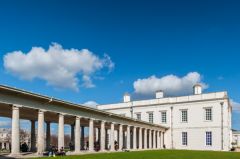 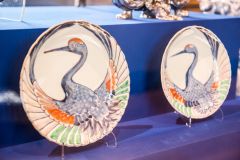 More self catering near Queens House >>