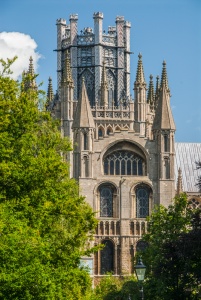 When a ceiling becomes a major tourist attraction, you know its a very remarkable ceiling indeed. At Ely, the ceiling in question certainly qualifies as remarkable. Ely Cathedral boasts one of the most amazing engineering feats of the Middle Ages in the form of its unique Octagon Tower.

There has been a church here since the 7th century, when St. Etheldreda, a Saxon queen, founded a cathedral on an island rising out of the surrounding marshes of the Fenland. Ely Cathedral was one of the premier Saxon churches in England, on a par with Glastonbury and Canterbury.

After the Norman invasion, Simeon, a kinsman of William the Conqueror, was named Abbot of Ely, and it was Simeon who began rebuilding the earlier Saxon cathedral in 1083, creating in the process one of the best examples of Romanesque architecture in England.

In the early 14th century, the Norman tower collapsed, and it is then that Alan of Walsingham steps into the limelight of history. He designed a central tower that seems to float unsupported above the crossing of Ely Cathedral like a cloud.

The "lantern tower" is actually formed by a series of massive oak beams which rise to a height of 63 feet. The tower is supported by diagonal oak beams resting upon stone pillars. These pillars support a total weight of some 400 tons of wood and lead. Most English cathedrals are built to a pattern of twin west towers flanking the main entrance and a central (crossing) tower. Ely has just one west tower and the huge Octagonal Tower. 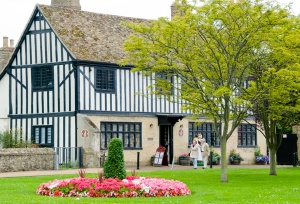 Cromwell's House
The beams of Alan of Walsingham's creation were carefully restored by Sir Gilbert Scott in the Victorian period, and Scott added restrained restoration work to the interior. Much of the stained glass at Ely is Victorian also.

Ely Cathedral was one of the premier Saxon churches in England, on a par with Glastonbury and Canterbury.

Ely Cathedral is much more than just a tower. The Norman carvings at Ely are remarkable in themselves, particularly those decorating the Prior's Door, and the choir is resplendently rich in Gothic carvings, this time in wood.

As mentioned, Ely began life as an island, effectively isolated by the surrounding fens. Its name means Isle of Eels, for the eels which swam in the waters surrounding it. So abundant were the eels that they were used as currency in the past. Imagine paying your rent in eels!

It was the isolation of Ely which attracted the last great "English" hero to hold out against the Norman invaders. Hereward the Wake used Ely as his base during his bitter rebellion against William the Conqueror. The rebellion lasted several years against the superior Norman forces, before Hereward was finally defeated, or as some histories suggest, bribed to stop. 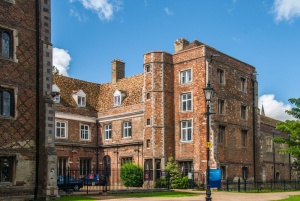 It was not until the Fens were drained in the 17th and 18th centuries that Ely's isolation ended. The cathedral still rises above the surrounding flat land like a beacon, calling to pilgrims.

There is more to Ely than the cathedral, however, though the cathedral is reason enough to visit. Several fine medieval buildings grace the city, notably the Bishop's Palace, King's School, and St. Michael's.

Oliver Cromwell once lived in Ely, and his 14th-century half-timbered house is now home to the local Tourist Information Centre.

Near Ely is another remarkable church, this time in ruins. Crowland Abbey was once the grandest abbey in the country. It was founded by King Ethelbald of Mercia in memory of his kinsman, St. Guthlac, who lived here as a hermit until his death in 714.

Ely is a peaceful small town, filled with beautiful Georgian buildings. And then there is that ceiling ....

More self catering near Ely

More bed and breakfasts near Ely

Barn 4 forms part of the unique curved barn conversion that is Kingston Barns. Completed to an exceptional standard, with access to a stunning shared orangery and landscaped gardens, this …
Sleeps 4

This semi detached cottage is located in the village of Alwalton near Peterborough and can sleep five people in three bedrooms.
Sleeps 5

24 Hours Open Reception with Free WiFi parking and a City Center location The Pearl Hotel is ideal for any business or leisure guest. This Hotel not only offers luxury accommodation at affordable prices but prides itself on the spacious rooms and outstanding Customer Service Team and offering Complimentary Breakfast … more >>