HERITAGE HIGHLIGHTS:   A medieval church on the foundations of a Roman church 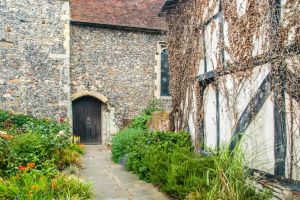 St Peter's church stands back from the bustle of Canterbury High Street, fronted by a small garden that seems to create an atmosphere of relative calm. The church is medieval, but its roots go back much further - the same can be said for much of Canterbury in truth! It is entirely possible that the medieval church was built on top of a very early church established for Christian citizens of Roman Canterbury.

That original Roman church was rebuilt by St Augustine in the late 6th or early 7th century. It was rebuilt once more in the late 11th century. The tower incorporates sections of Roman tile and Saxon cornerstones. That same tower houses a set of very ancient bells, dating respectively from 1325, 1430, 1599, and 1637.

A brass within the church commemorates the Huguenots and Walloons, Flemish weavers and cloth-workers who made up such a high proportion of the population in this area during the 16th and 17th centuries.