Beaumaris Castle is the largest and most romantic of Edward I's 'iron ring' of castles in north Wales, begun in 1295 to control the Menai Straights between the Welsh mainland and the Isle of Anglesey. 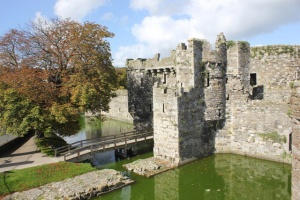 Three short years later the money had run out and the castle was never completed. By that time the immediate Welsh threat had evaporated (at least for a while) so it never became necessary to finish Beaumaris.

Beaumaris (the name translates loosely as "fair marsh") is a wonderfully symmetrical castle created out of concentric rings of battlements punctuated by round towers at the corners and along the walls.

It was a part of Edward's design to allow the sea to aid his defenses. A channel originally linked the moat to the Menai Straight, allowing the tide to add the deterrent of water to the thick castle walls. The channel has disappeared, but the moat is still full of placid water, and there is still a castle dock next to a fortified gate beside the Straight.

The castle is the work of Edward's favourite military architect, Master James of St. George, who was responsible for the building or rebuilding of at least 12 of Edward's 17 Welsh castles. 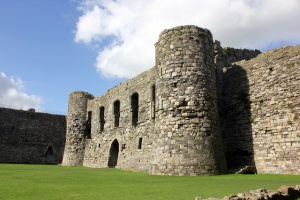 Despite his anglicized name, Master James was a craftsman imported by Edward from Europe. That Edward was appreciative of his work is apparent from the fact that he paid James the princely sum of 3 shillings a day, (an ordinary labourer earned perhaps one shilling per week) and granted him a manor in Wales.

Think of Master James' plan as a box within a box. But rather than simple square boxes, the outer walls were angled outwards slightly to improve the angle of fire from the multitude of arrow slits. Thus, every place along the wall is covered from the side. As well, the design incorporates a succession of murder holes, a massive barbican, 3 portcullises, and several more gates.

Master James' master stroke, though, was that the entrances to the outer wall and the inner are staggered, meaning that if an enemy breached the outer defenses, they would have to turn sharply and face murderous broadsides from the castle walls before they reached the inner gate.

For all its effectiveness, the defenses were never tested, as the Welsh resistance dried up and work on Beaumaris was abandoned. Because of this, your initial impression on visiting the castle may be one of disappointment. The towers of the inner ward seem squat - as they are, for their top stories were never completed.

Highlights of the interior of the castle include the lovely tower chapel, the profusion of passages you can explore in the walls of inner ward, and an exhibition on Edwardian castles in Wales. The views across the Menai Straight and Snowdonia are terrific. Best of all, Beaumaris is far enough off the beaten track that you will not have to fight your way through the crowds as you may in larger centres like Caernarfon.

The town of Beaumaris is full of beautiful half-timbered buildings, including the 14th century Tudor Rose and the Ye Old Bull's Head inn.

Self Catering near Beaumaris