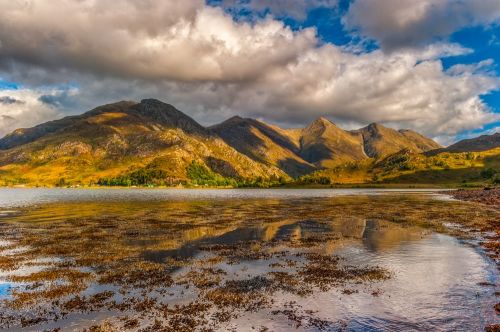 In 1266 Alexander III granted the Kintail estates to Clan Mackenzie and Kintail remained in Mackenzie hands until the line died out in 1814. One of the Mackenzie lairds of Kintail was William Mackenzie, the 5th Earl of Seaforth, who led the Jacobite troops against the royal armies at the Battle of Glenshiel in 1719.

When the last of the Seaforth Earls died in 1814 the lands were cleared to make way for sheep farming and then to serve as a vast sporting estate. The devastation of the Clearances changed the landscape of Kintail, but better times were ahead, stemming from an innocuous event in 1884 when a lamb owned by a local cobbler strayed onto land owned by the landlord of Kintail, an American railway tycoon named Lewis Winans.

The court case that followed helped bring about the 1886 Crofters' Holdings Act, protecting the traditional rights of crofters in the Highlands. The Kintail estates were passed into the care of the National Trust for Scotland in 1945.

William Mackenzie, 5th Earl of Seaforth, was a staunch Jacobite, a supporter of James Stuart's claim to the throne. In 1715 the 'Old Pretender', as he became known, launched a bid to claim the crown. After several false starts and defeats in battle, the cause seemed doomed.

Mackenzie, aided by a group of Spanish soldiers, had other ideas. In 1719 they seized Eilean Donan Castle and tried to raise popular support for a fresh Jacobite rising. Government ships bombarded the castle and forced the garrison to surrender, but the main body of about 1000 Jacobite troops marched south into Glen Shiel.

Near the Five Sisters, the Jacobites met a government army of 850 foot soldiers and 120 dragoons. In a battle lasting 3 hours, the Jacobites were overwhelmed, and Seaforth was injured. The Spanish troops were forced to surrender, and the rest of the Jacobites escaped in a thick fog. The Battle took place on the slopes of Sgurr na Ciste Duibhe, which has a secondary peak called Sgurr nan Spainteach (The Peak of the Spaniards) after the Spanish soldiers who fought in the battle.

The site of the battle is well marked by brown signs beside the road passing through the Glen. There is a small cairn and a plaque explaining the history of the battle, and footpaths lead across the hillside offering very good views over the surrounding landscape. 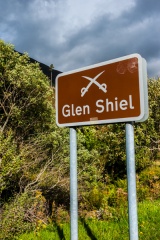 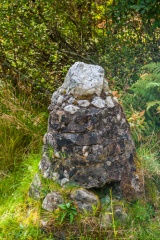 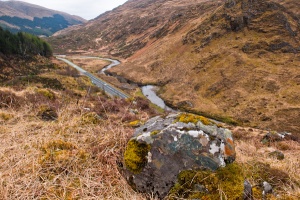 Almost directly across from the petrol station at Shiel Bridge is this 2000-year-old standing stone and later burial site. The name translates as 'Farquhar's Cell or Church' but the identification with an early saint is dubious. The burial site is made of two circular enclosures. One is visible as a turf-covered wall, or dyke, rising to about 1 foot high. The second circle is partially destroyed by the nearby roadway. Within the complete circle is a solitary standing stone, slightly less than 6 feet high.

The graveyard is probably much later than the standing stone, possibly built during the medieval period. There are no obvious signs to warn of the site, but access is extremely easy. Just park at the petrol station and cross the road carefully, as traffic can be heavy at times. On the far side of the bridge, it is easy to see the standing stone, and a small sign erected by the National Trust for Scotland. 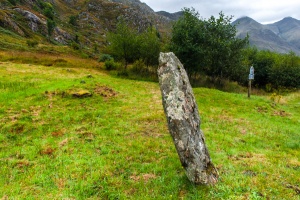 These 5 peaks include 3 Munros (mountains over 3000 feet high). The Sisters dominate the entrance to Glen Shiel and present an almost impossibly picturesque view as you approach the tip of Loch Duich. There are two good places to view the Five Sisters; one is at Ratagan, on the far side of the loch. Simply take the route signposted to the Glenelg Ferry at Shiel Bridge and turn off on the minor road to Ratagan after a mile. There are several laybys beside the loch where you can get a good view of the mountains.

For an even more spectacular view don't turn off towards Ratagan, but keep on the Glenelg road, which winds back and forth as it climbs the steep slopes of Mam Ratagan. After a mile or so the road emerges on a small plateau where there is a forestry car park and picnic area with wonderful views across to the Five Sisters.

If you'd rather climb the Five Sisters than simply admire them, the Kintail Rangers offer regular guided walks. Or you are welcome to walk any of the trails that lead across the peaks and the surrounding countryside, but please use a good OS map and take care, for weather conditions can and do change quickly. 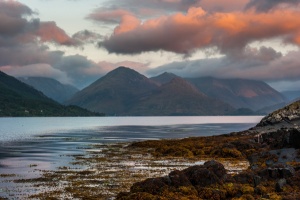 The Five Sisters at sunset 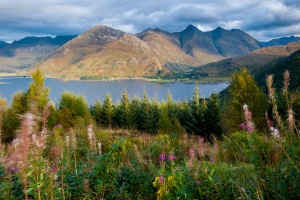 The view from Mam Ratagan 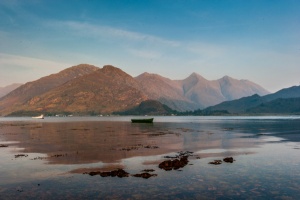 The view from Ratagan

One of the highest waterfalls in Britain, with an almost sheer drop of 560 feet from a high plateau. The Falls are in remote countryside, reached only on foot after a round trip walk of roughly 10 miles. For details on how to reach the Falls see our detailed account of the route. 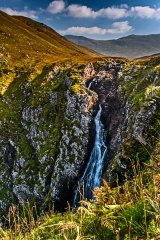 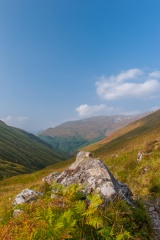 The trail to the Falls

Nearest Accommodation to Kintail and Morvich:

Nearby accommodation is calculated 'as the crow flies' from Kintail and Morvich. 'Nearest' may involve a long drive up and down glens or, if you are near the coast, may include a ferry ride! Please check the property map to make sure the location is right for you.

More self catering near Kintail and Morvich >>

More Hotels near Kintail and Morvich >>

More bed and breakfasts near Kintail and Morvich >>