HERITAGE HIGHLIGHTS:   Battleground for clan rivalry between the MacDonalds and Mackenzies 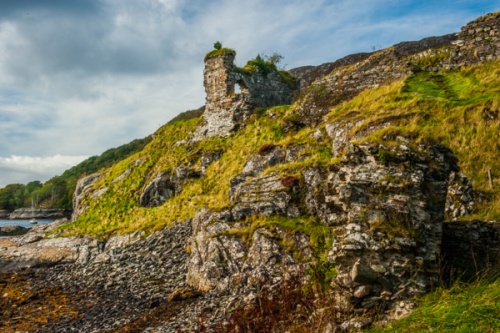 Strome Castle stands on a rocky outcrop on the north shore of Loch Carron, looking across the loch to Stromeferry on the south shore. Historically, the location stands on the border of lands claimed by the Mackenzie lords of Kintail and the MacDonalds of Glengarry, and that location led to repeated attacks on the castle. It also meant that the castle was granted first to one clan then the other as the winds of royal favour changed course, and this only led to further clan rivalry.

The first record of a castle here comes from 1472, but it seems very likely that the stone fortress actually dates to the early 15th century. The castle was owned by the MacDonald Lords of the Isles, but in 1546 Queen Mary granted it to the Earl of Huntly. 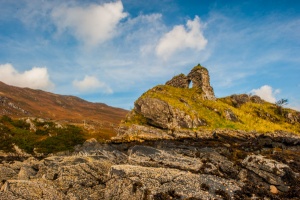 The castle from the rocky shore

In 1602 the Mackenzies once again put Strome under siege. The defending MacDonalds were holding out when tragedy struck. The original story was that 'silly women' snuck out of the castle to fetch water from the well.

The light was so poor, and the women so terrified, that they accidentally poured the water into the vat holding the MacDonald's gunpowder rather than their water barrel. When the menfolk discovered the error they cursed the women loudly.

That was another mistake, for within the castle was a Mackenzie prisoner. The prisoner overheard the commotion and learned what had happened. He managed to escape back to the Mackenzie camp and told his chief, who immediately launched an attack.

The defending MacDonalds knew the game was up. To save their lives they surrendered and were allowed to leave the castle with their possessions. The Mackenzie chief, rather than occupying his enemy's castle, promptly blew it up, leaving the castle a roofless and romantic ruin. 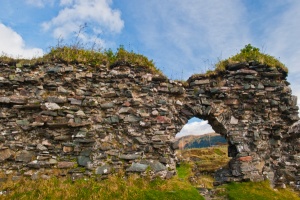 What we see today are the ruins of a rectangular hall house, about 100' x 30', with walls up to 4 feet thick. There is a cross-wall near the western end. East of the cross-wall the castle walls stand almost 20 feet high, though there are gaps.

On the west side of the cross-wall there are only foundation walls visible, though you can see a garderobe chute in the northwest corner. Near the east end is a mound of rubble, though what it once formed is unclear. The hall was probably made of timber floors, and had a central hearth (i.e. no chimneys).

In truth the ruins are not extensive; its the location - and the history - that makes Strome Castle worth a visit. Strome is an open site, accessible at any time - just be careful near the edge! 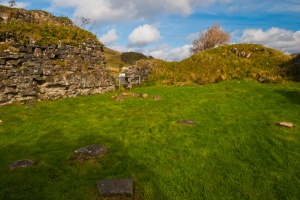 Inside the castle enclosure 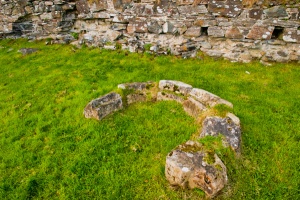 Remains of a ruined arch 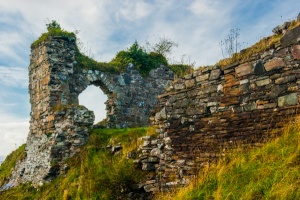 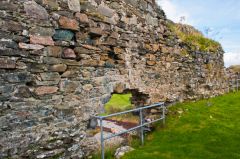 Nearby accommodation is calculated 'as the crow flies' from Strome Castle. 'Nearest' may involve a long drive up and down glens or, if you are near the coast, may include a ferry ride! Please check the property map to make sure the location is right for you.

More self catering near Strome Castle