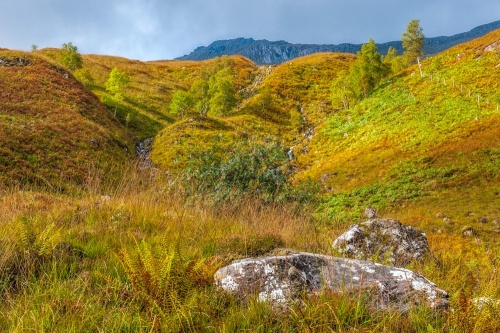 When you think of Jacobite rebellions there are three dates that come instantly to mind; 1689, 1715, and 1745. The most famous of these, and the one that most nearly achieved its aim of putting the Stuarts back on the British throne, was Bonnie Prince Charlie's 'Forty Five' uprising.

But there is another date, often forgotten, when the Jacobites made a bid to put Bonnie Prince Charlie's father, James Stuart, the 'Old Pretender' on the throne. That is 1719, which was dubbed 'the little rising' for obvious reasons. The uprising is usually overlooked because it was so brief and so quickly quashed. There was only one battle of note, and that took place in Glen Shiel, Lochalsh.

Another reason the 1719 uprising tends to be overlooked it that it was really an extension of the 1715 rebellion.

On 10 June 1719, a force of Jacobites supported by Spanish soldiers met government troops at Glen Shiel. Spain and the British government were engaged in ongoing conflict on the European continent and Spain hoped that by inciting a fresh Jacobite rebellion they would distract and destabilise the British government. Spain planned to land an invasion force in England at the same time as they sponsored a Jacobite rising in the Scottish Highlands. 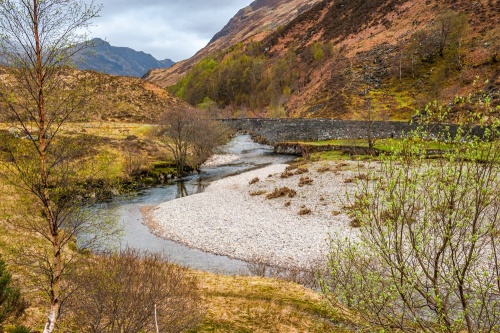 The River Shiel at the battlefield

The battle was part of the abortive Jacobite uprising known as 'The Nineteen'. The government forces emerged victorious and the Jacobite threat was effectively ended - only to emerge 26 years later under Bonnie Prince Charlie.

The battleground is directly beside the A87 road through Glen Shiel and can easily be explored while passing through the glen by automobile.

George Keith, 10th Earl Marischal was a staunch Jacobite, a supporter of James Stuart's claim to the throne. In 1715 the 'Old Pretender', as he became known, launched a bid to claim the crown. After several false starts and defeats in battle, the cause faltered. Many leading Jacobites went into exile overseas, including the Earl Marischal, who took refuge in Spain.

In April 1719 the Earl Marischal set sail from Spain, accompanied by 300 Spanish soldiers. They landed on the Isle of Lewis before sailing to Kintail where they joined forces with William Mackenzie, the Earl of Seaforth and chief of Clan Mackenzie, and William Murray, Marquis of Tullibardine.

They were joined by members of Clan Macrae and a group of MacGregors headed by the famous outlaw Rob Roy. The rebels moved on to Lochalsh where they seized Eilean Donan Castle and made it their headquarters. 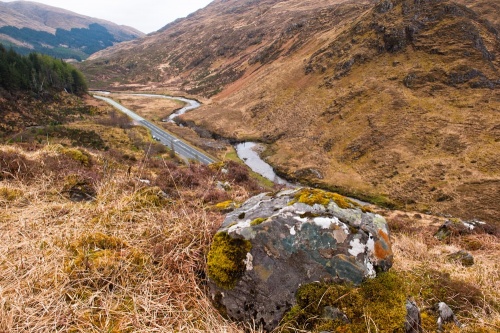 Looking down on the battlefield

Meanwhile, the Spanish invasion in the south met unexpected opposition - from the weather. Severe storms meant that the 5000 men at arms were unable to land. The Jacobites were on their own.

In a bid to inspire more recruits to the Jacobite cause Murray led 1000 of his men, including 200 Spanish soldiers, out of the castle. It proved to be a fortunate choice, for three government ships closed in from the sea at the same time.

The HMS Enterprise, HMS Flamborough and HMS Worcester bombarded the castle from the sea. They caused such severe damage that the garrison was forced to surrender, leaving Murray without the guns and ammunition stored in the castle.

The Highland rebels were expecting support from Lowland Scots but only a few men arrived. The lack of expected support is probably what swung the battle in the government's favour. 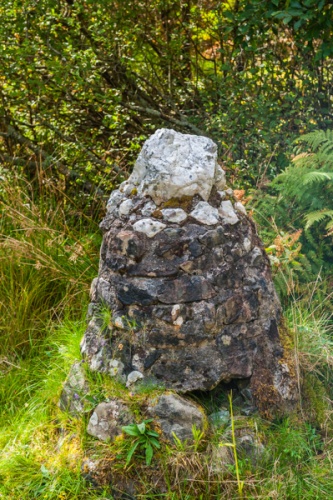 Murray was now threatened from two sides. He marched his men south into Glen Shiel, reasoning quite correctly that it would be easier to defend the narrow pass where the Inverness road made its way up the glen.

The two armies met near the Five Sisters, in the heart of Glen Shiel. The Jacobites took up a position at a point where the glen narrows. Murray barricaded the road and deployed his men on the high ground on either side. It ought to have been a perfect defensive position but Wightman launched a mortar bombardment and a full-frontal assault on the Jacobite line.

In a battle lasting three hours, the Jacobites were overwhelmed, and Seaforth was injured. The Jacobites fled for their lives, many of them escaping in a thick fog, while the Spanish troops were forced to surrender. They were briefly imprisoned but a peace treaty with Spain led to their release and they were sent home.

The Battle took place on the slopes of Sgurr na Ciste Duibhe, which has a secondary peak called Sgurr nan Spainteach (The Peak of the Spaniards) so named after the Spanish soldiers who fought in the battle.

The site of the battle is well marked by brown signs beside the A87 road passing through the Glen. It is located about 5 miles (8km) south-east of Shiel Bridge at NG997134.

There is a small cairn and a plaque explaining the history of the battle, and footpaths lead across the hillside, offering very good views over the battlefield and the surrounding landscape.

Though the battlefield is very well signposted it can be hard to gain any scene of where the various armies were arrayed but the setting is simply wonderful.

Nearby accommodation is calculated 'as the crow flies' from Glen Shiel Battlefield. 'Nearest' may involve a long drive up and down glens or, if you are near the coast, may include a ferry ride! Please check the property map to make sure the location is right for you.